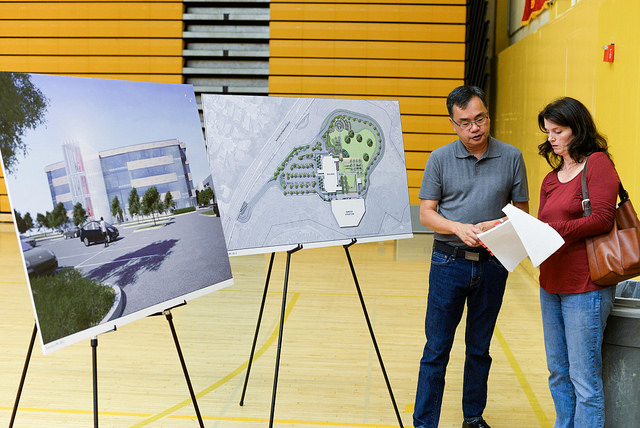 Neighbors of the satellite center conveyed their unease with the location and the negative effect it may have on their community, primarily an increase in traffic and parking.

“I have mixed feelings — concerns about traffic, parking, litter, theft and a lot of those things as a homeowner,” Scott Higbee, a neighbor of the site, said. “But as a parent, I have a son that is graduating Del Norte High School and we are considering Palomar. It would be neat to think that he could walk out the door, walk up the hill, and be at school.”

“My biggest concern is as a homeowner; home value, properties decreasing as a result of increased traffic or litter,” Higbee added.

Palomar officials has just released a draft Environmental Impact Report (EIR) for the new center. The forum was a chance for members of the community to share their opinions before the comment period closes on Dec. 7.

The South Education Center is located at 11111 Rancho Bernardo Road on a 27-acre property. Palomar purchased the property in June 2010 using Prop. M funds. Prop. M is a voter-approved construction bond for the college. Construction is scheduled to begin January 2016 and classes to begin Fall 2017.

Adrian Gonzales, Palomar’s interim president, pointed out that the open house-style was a practical choice.

“Ultimately, this is a nice set up in terms of being able to get one-on-one, specific questions about each aspect of what the college is going to be,” he added.

Many residents from Westwood, the neighborhood across the street from the future center, were in attendance. The main two concerns among most residents were traffic and parking, especially since the building was originally meant to be office space.

Terry Norwood, a Westwood resident and Palomar alumna, fears that Palomar is not giving them all of the details.

“It’s frustrating to the neighbors. They aren’t coming in as good neighbors … This could be a great community asset but they are not going about it the right way,” Norwood said.

Luke Chen, a Westwood resident, said he was dismayed that Palomar purchased the building. He has lived in the area for 18 years and runs a business out of his home.

“I am very concerned. I am really against the idea of converting what was meant to be an office and lower-density-use building into school classrooms, with hundreds of students and staff coming in and out,” he said.

“With office use, people come in at the beginning of the day and leave at the end of the day, but otherwise it’s relatively quiet and less traffic. But with students coming in and out, it’s going to be more of a problem,” Chen said.

Chen also pointed out that colleges have different hours than businesses. Palomar’s South Center would be open from 7:00 a.m. to 10:00 p.m. Monday through Friday.

He notes that traffic is already an issue but states, “hundred of students and staff are just going to add to the congestion and noise.”

Palomar officials however, don’t see parking as an issue. They claim that the parking at the center, currently around 800 parking spaces, will be adequate and they do not anticipate the center not having enough parking.

“We based that on our experience with Escondido. We are still doing okay with our Escondido parking and the way it is set up,” Gonzales said. “But, remember we do have that back area of the building. We are not intending to build additional buildings back there so that gives us an opportunity to put additional parking, if we absolutely needed to.

“Maybe another parking structure, if we absolutely needed to. So we have room for growth behind the building,” Gonzales said.

Palomar Police Sergeant Mike Maines agreed with Gonzales that the new center has adequate parking based on the student cap.

“As far as the traffic impact, there is going to have to be different sequencing of lights and all of that. But as far as that goes, if we stagger the classes, I think the impact will be very small,” Maines said.

Palomar officials and Westwood residents seem to be at standstill in their disagreement. As far as the residents are concerned, “we will be responding to the EIR, because that is the only recourse we have,” Norwood said.

After the comment period ends Nov. 7, the concerns will be incorporated into the EIR. The EIR will be proposed to the board for final approval in January.