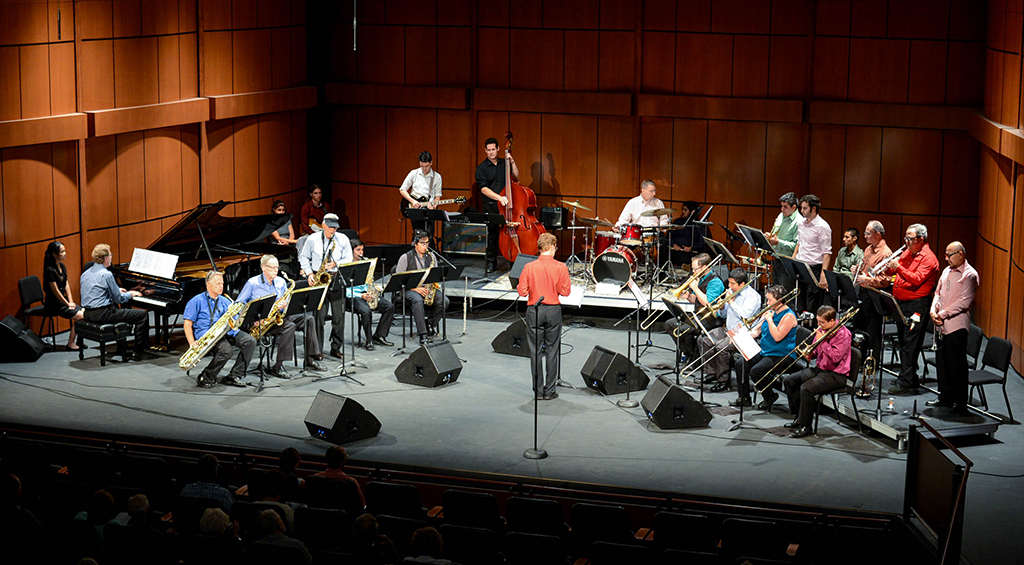 Jazz filled the air at the Howard Brubeck Theatre as music admirers and jazz performers gathered to kick off the concert season.

Under the direction of Paul Kurokawa the concert, titled “Palomar Jazz! Making it Look Easy!” was held Sept. 18. The production featured Palomar’s day and night jazz ensembles, accompanied with a professional performance by The Stan Lawerence and Reka Parker Jazz Quintet.

Both jazz bands consisted of 20 or more musicians of all ages. The ensemble was arranged in a big band style, portraying classic jazz. Bands were composed of trumpets, trombones, saxophones and a rhythm and percussion section.

The Day Jazz Ensemble, also known as the Four O’Clock Ensemble, opened the show, performing six melodies in total. The ensemble commenced with a moderate, relaxed swing piece called “Ringin’ n’ Swingin’.” The number had a quintessential jazz vibe, setting the jazz atmosphere for the audience.

As the performance thrived, the Day Jazz Ensemble altered it up a bit with a classic “The Way You Look Tonight.” Vocalist Jose Guerrero was featured. Although it was Guerrero’s debut with a big band, his voice had exceptional resonance and timbre, synching excellently with the band. At the end, the ensemble spiced it up with a powerful, swing styled jazz ending piece called “Molten Swing.”

Kurokawa not only directed and engaged the audience with a comical vibe, he also accompanied as a trumpeter and performer with The Stan Lawerence/Reka Parker Jazz Quintet. During the three pieces, the professional quintet provided listeners with powerful toned jazz, along with astounding dynamic ranges by each instrument and solo.

Night Jazz Ensemble, also known as the Seven O’Clock Ensemble, took stage to wrap up the night, playing nine pieces in total. The ensemble rhythmic potency and section spotlights had spectators captivated. During the tune, “Fantasy.” vocalist Beatriz Avalia-Casillas and Victora Renteria enchanted the audience with their duet as they intertwined tones and synced in harmony with the ensemble.

One of the ensembles remarkable songs was a big band jazz piece “I Be Serious ‘bout Dem Blues.” Solo trumpeter Joel Buras stole the stage as he and Kurokawa shared a duet on the trumpet, both hitting an impressive variety of dynamics, and giving momentum to the band. The piece also featured soloist from every section, wrapping up the show with a fortissimo note and drum roll.

Palomar Jazz had definitely “made it look easy” at the end of the night. According to Director Kurokawa, each group had only an astonishing four rehearsals. Despite this, both ensembles performed phenomenally, receiving roaring applause, along with standing ovations.

Palomar Jazz’s next concert is scheduled for 7 p.m. Dec. 6 at the Howard Brubeck Theatre. For further information, visit palomarperforms.com.