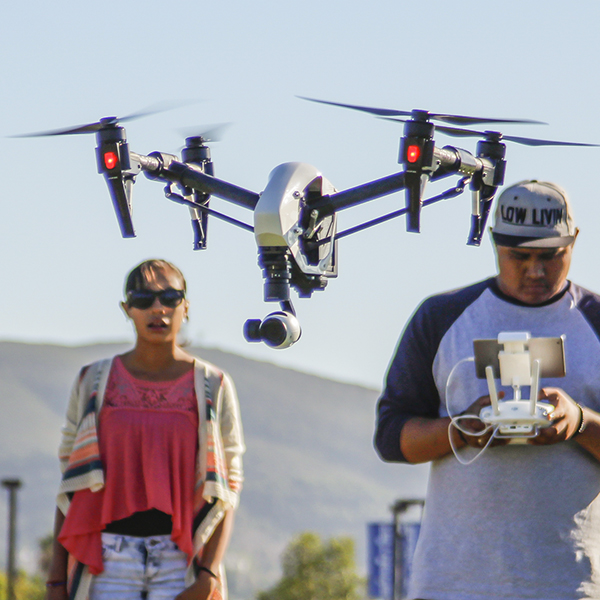 A Graphics Communications program at Palomar College has students buzzing about working with drones, but not everyone is happy.

GCIP 168, also known as the “Drone Class,” is a course being taught at Palomar College by Professor Mark Bealo. The class aims to use drones, also known as unmanned aerial vehicles for digital imaging. The course teaches how to build, maintain, operate and outfit small unmanned aircraft for the purpose of taking photos and video.

Palomar is currently undergoing new campus construction, particularly in the areas near the MD and H buildings. Bealo said that the students operated their drones over the new library construction site afterhours as part of an assignment to catalog changes on campus.

Bealo said construction employees saw the drone buzzing around and were concerned.

Palomar officials asked that Bealo stop flying the drones over critical construction sites while a better policy was in the process of being enacted, citing potential safety and security concerns for the workers at the site.

Palomar Spokesman Laura Gropen said the class was approved by the school but campus safety was critical in its administering.

“The other issue is … we are in the process of working with the (Federal Aviation Administration) regarding licensing and that has not been secured,” Gropen said.

The FAA is inconsistent as to what certifications drone operators need to legally fly in public airspace. Some ordinances require a certificate of waiver or an authorization form that certifies the airworthiness of an air vehicle.

“Today, do I need a Section 333 and a COA in order to be doing what we’re doing… Technically yes and no.

“Yes because historically that’s what they (FAA) say. No because, as of February, they propose to do away with that anyway,” Bealo said.

“As long as they don’t hurt anything or anyone then I think it’s fine… I might take the class in the future,” she said.

GCIP 168, Digital Imaging with Drones, will continue to operate small unmanned aircraft for the time being. The class meets Mondays from 2 p.m. to 5 p.m. and Tuesdays and Thursdays from 5 p.m. to 6 p.m. in MD-146.