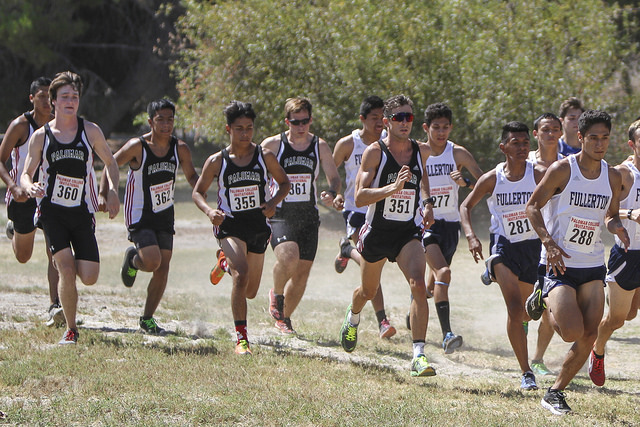 Palomar’s cross country has a long road ahead, but the runners of both the men’s and women’s teams say they’re striving to be the best as a collective unit rather than as individuals.

The Comets began their season with hosting the Palomar Invitational Friday, Sept. 5 at Guajome Park in Oceanside. The highlight performance of the day was sophomore Riley Chapman’s third-place finish in the women’s meet. The women’s team finished fifth as a whole while the men’s placed 10th.

Two of the star performers from last year’s women’s team, Jessica Steinhoff and Jessica Betancourt, have graduated and continued their careers at Cal State San Bernadino and San Francisco State, respectively. With the season going until November, each team will have time for improvement to reach the standards of past years.

“We are currently in a rebuilding year,” Head women’s coach Jennifer Williams said. “The goal is to make it to the state conference, then try and qualify for regionals. To do this we must focus on building up the team as a whole.”

This year’s team will look to sophomores Kevin Clukey and Riley Chapman to set the pace and example for the squads. A sophomore from Woodlands, Texas, Clukey also competes in triathlons while Chapman has been running competitively for the past several years.

Williams stated that the emphasis on their training methods is to hone in the talents of the freshman athletes and bring them up to par with the returning collegiate-level runners. Competing in the 5-kilometer races not only takes an intense cardio level, but also keen focus and mental determination.

Palomar sophomore Sarah Martinez said her inspiration stems from “knowing you can do something that most people can’t do and pushing yourself to your limit even if you think you have nothing left.”

Martinez said she thought she was going to quit running when she entered college, but coach Williams motivated her to continue.

With an abundance of new runners this year, the coaches stress the importance of taking time outside of school to prepare for the races. Williams emphasized early on the struggles the runners will be facing in the future so they can get ready for the challenging season ahead.

Besides alternating practice days between long-distance runs and speed drills, another way the coaches are preparing the team is by taking the athletes out kayaking at La Jolla.

James Singler III, a Deaf Studies major, runs 30-40 miles a week as part of training. Pre-meet rituals can be key to help a runner get in the zone pre-race and Singler is no different.

“Before a race, I listen to music, like electronic music and it makes me feel calm, it helps me take a breath and get ready for the competition,” Singler signed. He is partially deaf.

“I actually was tricked into running by my friends, because I used to be fat,” Palomar freshman Cesar Mayorga laughingly confessed. “Running helped me lose weight and then I realized how much I liked it.”

The next home meet for Palomar is 10 a.m on Saturday, Oct. 17, 2015 at Cal. State San Marcos when the Comets compete in the Cougar Challenge.