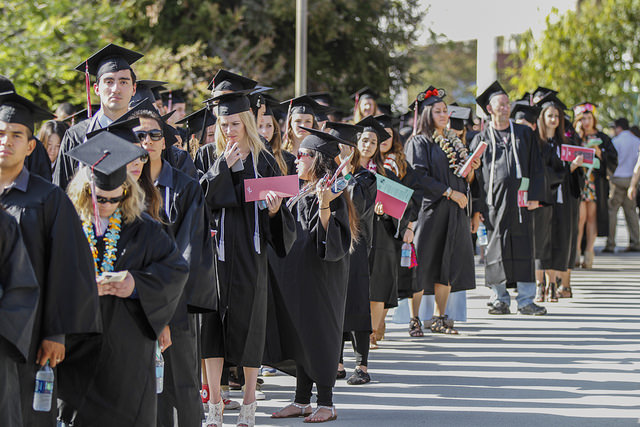 On May 15, 2015 Palomar College will be having its commencement ceremonies, handing out degrees and certificates, and saying goodbye to a few of you. It’s time for that big sigh of relief – you’re graduating. All the hard work, late nights, lost weekends, homework and stress are closer to evaporating.

Some students came directly from high school on their road of a lifelong dream they’d had since they were kids. For some, the road to graduation took more time and a lot of hard work. They juggled their work schedules and family nights to accommodate their classes and studies.

All have the one thing in common – this leg of their journey is over.

According to Palomar’s Enrollment Services the 2014 – 2015 evaluations total for those eligible to receive a degree or a certificate is almost 4,000 students. During the year of 2012 – 2013 that total was just over 4,400 students.

On California’s government website, College Navigator, the current graduation rate for Palomar is listed as 25 percent, this percentage is based on first-time, first-year undergrads who complete their program within a specific amount of time.

Palomar officials say they have always encouraged an atmosphere of growth and challenge. And this seems evident when speaking to students about their experiences while at Palomar. Many will look back to find the one thing that gave them the motivation to continue and see that it was the instructors.

Michael Dentoni, vice president of the campus student government, is graduating this year. His major is business finance and Dentoni said he looks forward to attending a 4-year college and becoming a Certified Public Accountant.

His most memorable time spent at Palomar has been competing with the Speech and Debate Team saying “our coaches are what really make the team.” The debate team ended up fourth in the nation this semester.

Also, Dentoni’s experience working with the ASG has left an indelible image on him.

“Working with the ASG is a good way to learn real-world skills and at the same time add something to your college experience,” he said.

Dentoni also said he will be looking for a quiet, peaceful place outdoors to contemplate his graduation.

For Alberto Bajarano, a one-year member and vice president of service with Phi Theta Kappa, graduation “feels like a huge stepping stone I’m passing over and getting on with my career.”

He said he went directly into the workforce following high school, then into the University of New Mexico to become a civil engineer. After a short time he left college and joined the U.S. Marines where he found his true calling: aviation.

While in the Marines, Bajarano was able to obtain his pilot’s license, work on helicopter engines, and develop his passion for flying. After he completed his service he “hit the ground running” with his education because of his love of flying.

And now Bajarano is graduating with a GPA of 3.72, and is obtaining an associate degree in aviation management. He has been accepted into the bachelor’s program at Southern Illinois University, which is located on campus at Palomar in the new Natural Sciences Building.

Bajarano’s excitement is uncontained when speaking about his career path. He is looking forward to obtaining a master’s degree in occupational safety and then possibly a doctorate.

He recalls a time at Palomar when he was overwhelmed with five classes and was getting discouraged, he kept telling himself to “just push through.” Bajarano, with the help of his wife, friends and tutors at Palomar, was able to turn everything around and enthusiastically come out ahead.

Bajarano said learning was much easier after that.

“I completely stopped thinking about my grades in the class and it (became about) how much knowledge I can actually absorb from my professors,” Bajarano said. “Instead of trying to get a grade, I was trying to learn.”

What helped him a lot was an unpaid internship at the French Valley Airport in Temecula as an operations manager for Country Wide Flyers. This provided valuable hands-on experience while reinforcing his college education.

Bajarano’s advice to students entering Palomar is: “Don’t be afraid to talk to your professors. The professors here are so amazing, that’s what I love about Palomar College – the professors and staff. It’s amazing how much they care about the students.”

Bajarano’s graduation celebration will be dinner with family and then back on the road to his bachelor’s the very next day.

At the University of California Law School graduation in 2007 Charles Munger told the class that “You’re not going to get very far in life based on what you already know. You’re going to advance in life by what you’re going to learn after you leave here.”

Palomar College has been serving the community since Sept. 23, 1946 when they opened on the Vista High School campus with an enrollment of 100 students, a president, a dean and nine faculty members.

Today, though the enrollment at Palomar seems to vary with the economy, there were close to 25,000 students enrolled in six different campuses and over 1,500 faculty, staff and administrative employees..