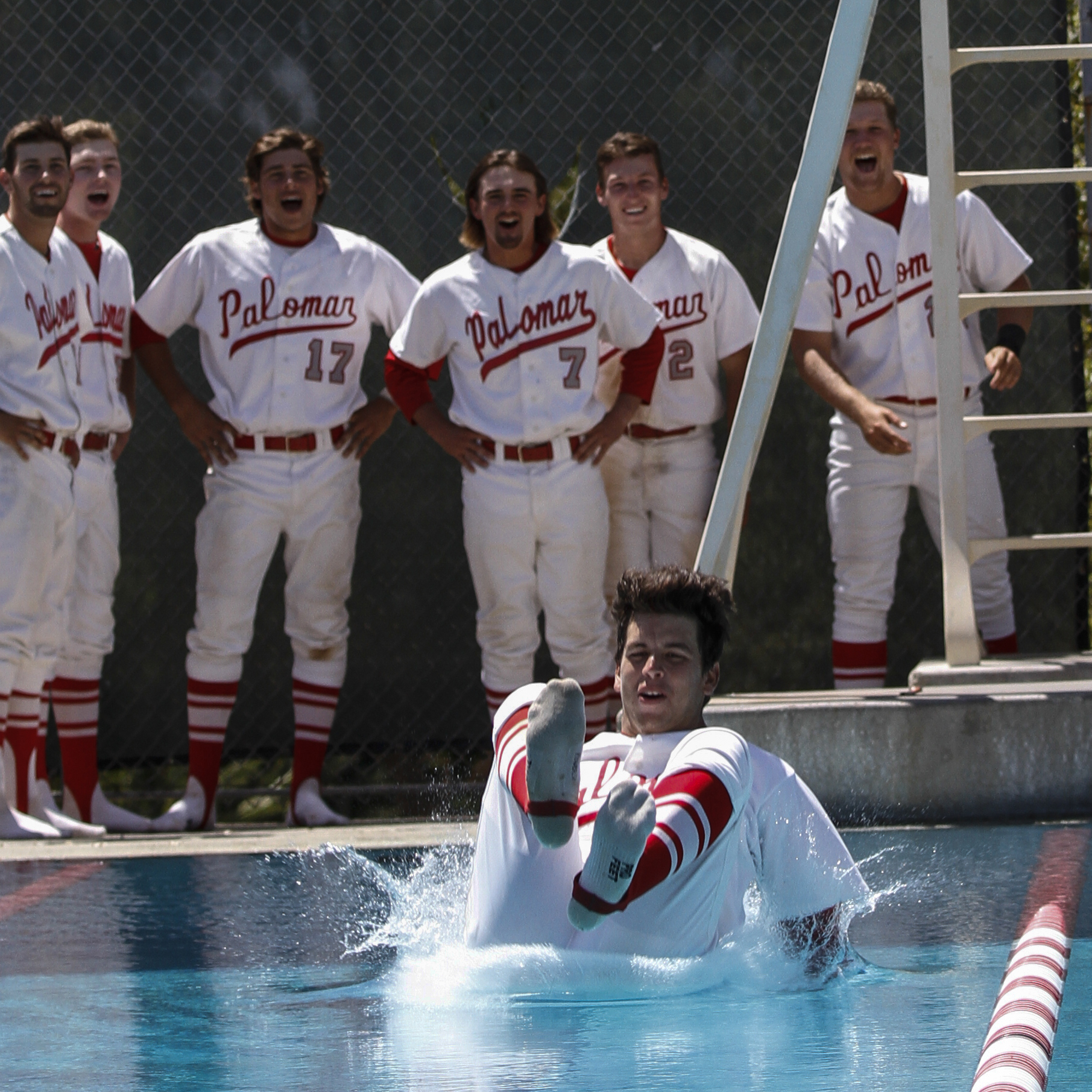 They are No. 1 in Southern California, No. 5 in the nation and boast a conference men’s coach and scholar athlete of the year.

It’s been quite a season for Comet’s baseball.

After having 20 players from last year’s 28-11 team move on to play at four-year universities, Head Coach Buck Taylor and his coaching staff’s program reloaded for 2015. Going 30-6 (21-3 PCAC Conference) and having two, 10-game winning streaks, the Comet’s have scorched their way to a 5th straight PCAC title.

“They don’t like losing – that’s for sure – and they’re not used to it,” Taylor said after the Comet’s 4-2 round 1 playoff victory over Riverside City college at Myers Field on May 2. Taylor was also just named men’s coach of the year for the second time, after also winning in the title in 2009.

A habit of winning mixed with camaraderie that can clearly be heard from the dugout pushes Palomar on their hunt for a first state title. After the May 2 victory, the team celebrated by practicing their diving skills off Wallace Memorial Pool’s high board.

The battery of sophomore left-hander Jake Barnett and catcher Frank Christy has been one of California’s strongest. On the mound, Barnett leads the team in wins (8-2) and PCAC in strikeouts (74). Christy, who in 2013 was drafted in the 37th round by the Oakland Athletics, has been a force batting clean up with nine home runs and 47 RBI’s, good for second and third in respective state rankings.

The key to being a student athlete is excelling both on and off the field, and third baseman Vince Mori is one of the school’s exemplary performers. Mori’s combination of a 3.95 GPA and .315 batting average earned him the distinction of PCAC scholar-athlete of the year for all sports at the May 5 meeting of the conference’s 10 athletic directors.

A trio of Comets pitchers: Troy Lamparello, Tyler Russell, and Taylor Turski each have five victories this season. Turski’s 0.80 ERA through 56 innings pitched is second best in all of the state. Collectively, the pitching staff owns the best ERA in the state of 1.91, ahead of the No.1 team in the nation, Northern California’s San Joaquin Delta, which was second with 1.97.

This season couldn’t have come at a better time for the program with the Comets saying goodbye to their storied Myers Field and moving a 10-minute walk to the other end of campus and a brand new ballpark with facilities that will be ready for play next year.

Up next, Palomar is set to play Irvine Valley College 23-16 (8-11 away). The Comets (17-1 home) will continue as the top seeded club and have home field advantage until the Final Four round.

As for coach Taylor’s expectations, “We’re gonna win every game.”