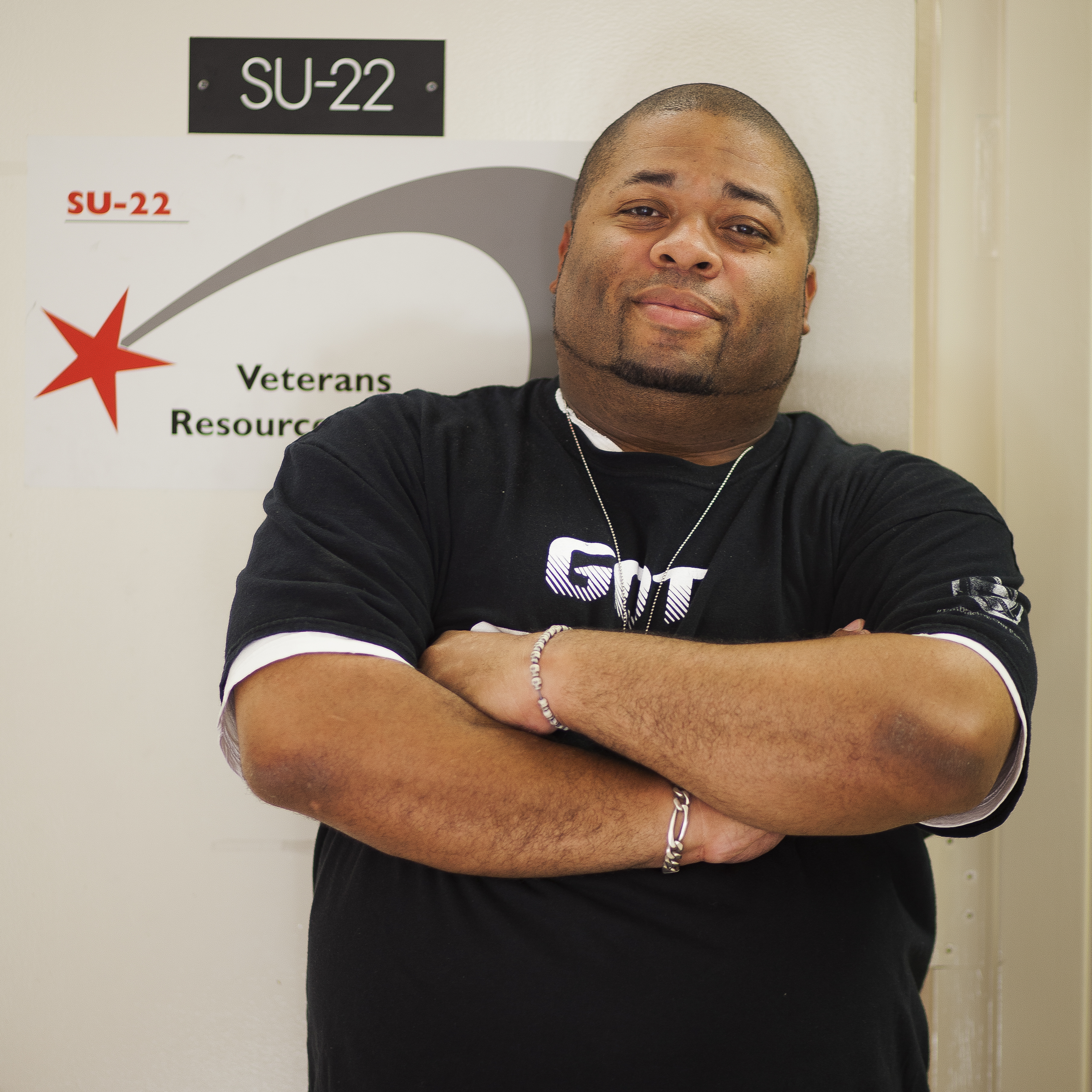 That means approximately 20 percent of the students at Palomar are affiliated with the military. Palomar serves more veterans using V.A. education benefits than any other college in California, including 4-year universities.

Two such veterans are students at Palomar College; one spending more than two decades in service while the other spent four years. Each have returned to school as veterans.

The first is John Lewis, who retired after 21 years of service with the U. S. Air Force. Lewis said he served as an EOD (Explosive Ordnance Disposal) technician, and has done multiple deployments to Iraq, Afghanistan and other parts of the world. He joined when he was 17 years old.

He was born in Redding, Calif. and is married with two children who are ages 16 and 20. Both of his children attend Palomar College, while the younger is still in high school. They all shared a class together at one point.

An EOD tech like Lewis disarms and disposes of bombs like the deadly IEDs (Improvised Explosive Devices) terrorists have used for decades against U.S. forces in areas of the Middle East. These combat techniques are enough to intimidate even the bravest of men and women, and an EOD tech carries the reputation of the most deadly occupation anyone could possibly have, but Lewis speaks about what he did as if it were a normal day job.

“We never go up and cut the red wire,” he said jokingly. It’s “not really scary”, he added because of all the training he and his teammates had.

Lewis responded to over 600 IEDs during his 15-month-long deployments in Iraq. There were many close calls, but he said they always felt safe because of the poise they possessed.

After Lewis retired from the service he continued to work with the military, conducting technical training in the EOD field as a contractor. He said he retired because he was tired of the back-to-back,15-month-long deployments.

Lewis does reminisce though. “I miss the military life, living on base and the camaraderie,” he said.

He quickly reminds himself of his favorite part of life now though, “getting up whenever I want.”

It had been 30 years since Lewis has been to school when he enrolled at Palomar. After four semesters he maintains a 3.0 GPA and said he enjoys school and appreciates the Veteran Resource Center, which is usually where he can be found if not in the Veterans Affairs Office.

Lewis said he is positive about his future, aiming to transfer to San Diego State University to become a mechanical engineer. He aspires to work with NASA where he hopes to see his robotics put to use on space missions.

Another standout veteran at Palomar is “Big” Sid Matlock, which is a perfectly fitting nickname because he is impossible to miss on campus, easily standing six feet tall and built like a house.

Matlock was a one-termer, serving four years with the U. S. Marine Corps.

As a Marine, Matlock originally trained as a field wireman but never worked as one, receiving TAD (Temporary Additional Duty) orders to a 1st Marine Expeditionary Force. While there, Matlock worked for the command element, breaking down and monitoring classified material.

Matlock was never deployed, but it never bothered him despite being the reason he joined the Marine Corps. He said he was “indifferent” to it and he “never had anything to prove.”

He does not miss the everyday life of a Marine, but the “people are what I miss the most, I didn’t understand true friendship and loyalty until the Marine Corps,” Matlock said.

He has two daughters, Brooklyn, 7, and Madison, 5. When asked if his kids were with him he replied, “not yet” with a confidence in his voice that makes you believe they will be soon.

“I wasn’t always a good guy, and I made mistakes that I have to pay for,” Matlock said.

Palomar is a home to Matlock, and he spends most of his time at the campus. He is quite the celebrity at Palomar, many students know who he is, and he has taken on a fatherly role at the Veteran’s Resource Center.

The VRC becomes a lively place and erupts with emotion when Matlock walks in. He makes his rounds through the room, shaking hands, and greeting everyone with energy and enthusiasm. He has a unique ability to communicate with people and has a keen sense for people who need someone to talk to. He is frequently requested for advice, and calls individuals to his side to catch up on their lives.

Matlock said he cares deeply for others, and he is a community man believing that serving his fellow students ultimately makes him a better person.

“I take care of my vets, fellow students and fellow man,” he said. “Palomar has made me become a better person, father, and mentor. I love Palomar.”

Matlock has coached Pop Warner football, is currently a member of the Active Minds club where he promotes thinking in different perspectives. He is also a member of the Student Veterans Organization.