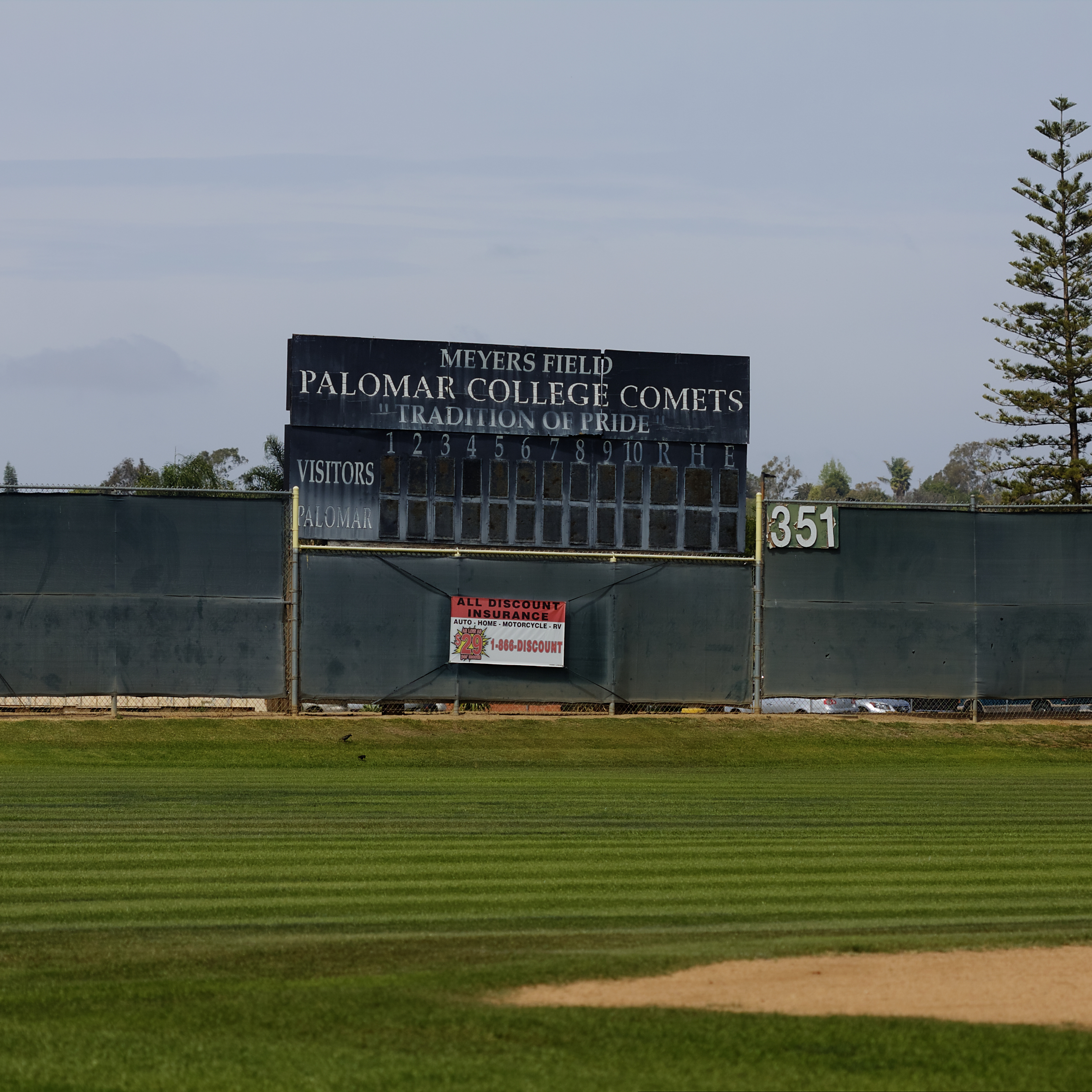 Throughout the years, the field has seen season after season of fresh and ambitious athletes compete on its grounds. At the end of the current season, it will be razed for a future expansion of parking and replaced with a new, Division I-level baseball field that will finish construction within the coming months, located above Student Parking Lot 9.

“I take pride in what we do and being successful. I think in having this field our next step is making state final four and giving ourselves the opportunity to win a championship,” Taylor said.

With the new facility and a baseball team on its way to hopefully achieving a 5th consecutive Pacific Coast Athletic Conference (PCAC) title (14-2 conference record so far this season), Palomar College baseball has become a figure within the college and the state, currently ranked 12th in the nation.

Myers Field’s history can be traced back into the “Golden Jubilee,” a book published in 1995 that compiled Palomar College’s history for its 50th Anniversary of the same year.

Myers Field was constructed in 1955 by then Athletic Director, Ward “Rusty” Myers, his players, and the college’s maintenance crew, according to the Golden Jubilee.

“I can still remember (Myers) out there on a tractor grading the site for the field,” Cord said.

The famous scoreboard above center field was named after Myers, but was misspelled “Meyers Field.” To this day, the reasons behind that are unknown. The Telescope went through multiple sources; none of which could provide an answer.

With the new baseball facility, Coach Taylor said he hopes for better-trained and prepared athletes that will come from the enhanced field compared to the aged Myers Field.

“I think this facility will bring in, maybe, a higher caliber athlete,” Taylor said.

While Palomar College may see better-trained athletes to compete in today’s competitive world of athletics, in 1980 Palomar had sent four players to the major leagues and many players into the minor leagues as well.

Palomar players Randy Johnson went on to play for the Atlanta Braves, George Himshaw to the San Diego Padres, Jim Scranton to the Kansas City Royals, and Troy Afenir to the Houston Astros. They all played on Myers Field.

Nick Vincent is another product of Palomar College who is currently playing for the major leagues with the San Diego Padres. He played for the Comets in both its 2006 and 2007 seasons.

According to the Golden Jubilee, Palomar witnessed its two greatest winning teams under Vetter, the 1988 season with 29 wins and the 1973 season with 27.

In Palomar’s modern era, Palomar has witnessed again its two greatest winning teams thus far. Palomar baseball’s 2009 season had a record of 36 wins and its 2006 season with 31 wins, all while under the tenure of Coach Taylor.

While history will be lost with the removal of Myers Field, Palomar’s new baseball field will usher in a new era for Palomar Baseball and a greater appreciation for its supporters and athletes.

“I’m so happy for our fans that they can sit in a nice seat, in a nice environment and watch a game and not be deaf when they leave there from the cars driving by,” Taylor said.

“We’ll definitely miss (Myers Field), there’s a lot of memories down there for myself and all the past coaches and the past players,” he added.