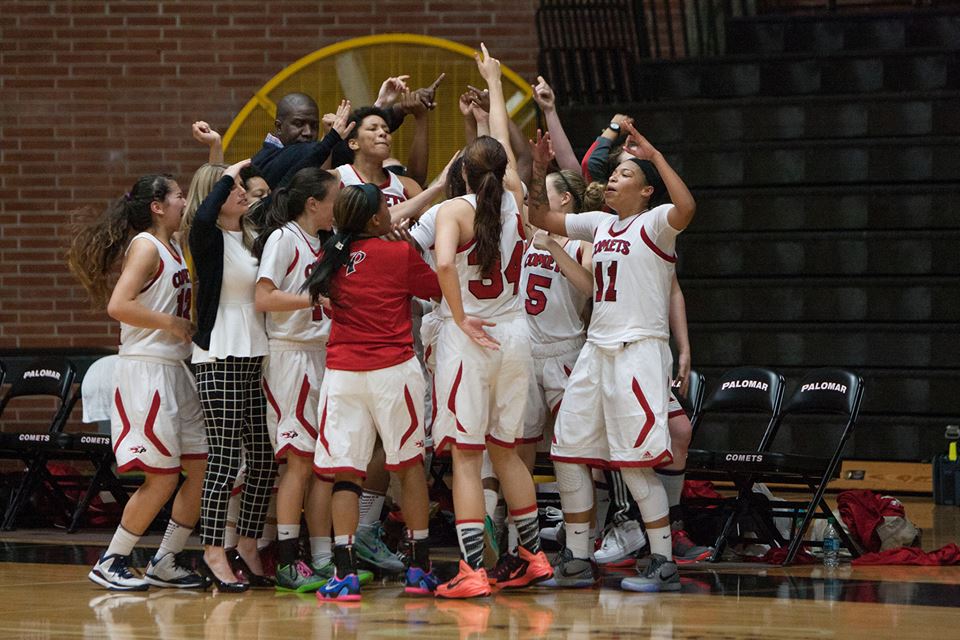 With the season on the line and the game being streamed live via webcast, the Palomar College basketball team had a lot of pressure going into their March 4 game against defending state champion Ventura College.

So what did they do? They stuck with what they do best: smothering defense, ball sharing, and let Keisha Cox do what she does best – score.

With Cox leading the way with 24 points and 10 rebounds, the 5th-seeded Comets (26-3) defeated 4th-seed Ventura 69-47 en route to advancing to the state Elite Eight on March 7 with No.1 seed Mt. San Antonio College (32-0). That was the obstacle standing in the way of the Comets getting to the Final Four March 14-15 at Cerritos College. Check on The Telescope website for a further update on the March 7 game to see if the Comets made it to the Final Four.

The game started off strong in the beginning, with Venture gaining a quick 17-16 lead. But Cox, along with Melissa Allen, Chelse Ayala and Ashleigh Barnes, would combine to outscore the Pirates 14-2. The scoring outburst put Palomar on top 30-19 with a little over 3 minutes left to play in the first half.

The Comets would go into halftime with a 34-24 lead, which they never relinquished. Tessa Balcom started off the second half with two 3-pointers, and Allen added a basket of her own to give Palomar a 23-point lead. The win was Palomar’s seventh in a row, and 15th out of the last 16th.

Coach Leigh Marshall spoke endearingly about her team’s effort after the game.

“Cox was a big key, obviously,” Marshall said on the Palomar website. “Ayala really stepped up off the bench. We got her some scoring opportunities and she contributed some steals. I thought the play of our point guards, Ayala and (Lee Lee) Tomlinson was critical for us. They played great defense on their point guard (Aubri Smith), who is their best player.”

Tessa Balcom finished with 11 points, Ayala added 10 of her own, and Allen had 9 points. Mikaela Shannon finished the game with 10 rebounds.

Update: An outstanding season for the Comets Women’s Basketball team came to an end on March 8 as Palomar lost to Mt. San Antonio College 60-54 in round 4 of the California Community College Athletic Association (CCCAA) Southern California Regional playoffs.

Keisha Cox (11) led all players with 22 points and 11 rebounds. Melissa Allen (15) was second high scorer for The Comets with 8 points. Jessica Scott (52) pulled The Comets within 4 points after scoring on a pair of free throws with 35.8 seconds remaining in the game. Lynnzy Troxell (44) pulled down 9 rebounds in the game.

Mt. San Antonio College will play the winner of the Northern California Regional bracket on March 14 at Cerritos College for the state championship.