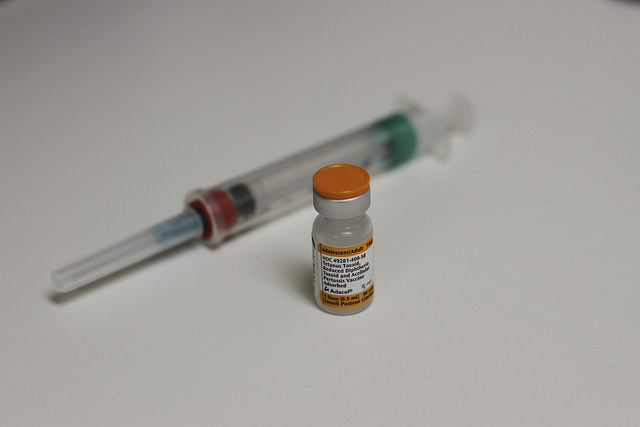 Getting vaccinated is your civic duty

I remember what it was like having to get vaccinated as a child.

I remember I would check my little yellow Immunization Record card and dread the date marked for my next appointment. When one of those dates would inevitably come, my parents would take us to the doctor’s office and there would be nothing to do but sit and wait for the shot.

It was one of those worries of life as a little kid. But as real as the struggle was, we knew getting vaccinated had always been a standard that everyone had to go through. Even at that age, we understood this was meant to keep us safe and that it was important.

Now, with the recent increase in people who actively choose not to vaccinate their children, it seems like all that diligence was for naught. Though it’s common to think that catching something like measles “won’t happen to me,” it is surprisingly easy for the system that has kept everyone healthy to tum- ble when people stop vaccinating.

According to organizations such as the Centers for Disease Control, as people get vaccinated, fewer people become sick and the risk for infecting other people is reduced. This way, new cases of certain contagious diseases can be held at bay, ultimately to the point where we can say a disease has been eradicated. Then, even if a few people can’t be vaccinated, the immunity of the group protects everyone.

When enough people have been vaccinated to make this happen, it can be said that the population has reached “herd immunity.” For measles alone, it is necessary that over 90 percent of a population be immunized for herd immunity to take effect. But as people stop vaccinat- ing, the risk of someone becoming infected increases, and once a person is contagious the disease can spread exponentially through more of those who are unprotected.

This is what has begun to happen. Diseases that had become uncommon thanks to vaccination are now resurfacing, such as in the current measles outbreak that stemmed from children who visited Disneyland and has spread to several states.

But one of the most worrisome aspects of this is the logic people use to justify why they are choos- ing to forgo vaccinations. Every bit of misinformation about the effects of vaccines and perceived dangers is perpetuated by an atmosphere wherein “my (perceived) rights and beliefs” trumps all, and where the search for an “all-natural” lifestyle has become a flawed trend.

One of the major arguments by people who don’t vaccinate their kids is that they reserve the choice to not vaccinate. Some go as far as to say that this is their right and that what they do is no one else’s business. This attitude of entitlement seems to come up everywhere in recent times (despite the fact that some of these qualms are not rights but merely privileges); it’s my right to do things my way and get away with it.

If your child happened to get sick with the measles and spread the illness because you chose not to vaccinate him, now you would be infringing on the rights of someone else to not be exposed to a potentially deadly disease that can easily be prevented through immunizations.

This is not to say people who don’t vaccinate are bad people. It’s not easy being a parent and neither is figuring out what’s best for one’s kids. But why are they making these choices? Because some health blog or some celebrity says that vaccines cause autism, or that vaccines make children sick, or that vaccines contain toxic chemicals that are not “natural”? These claims have been disproved through actual studies, and if we’re refusing vaccines to cut back on unnatural things and toxic chemicals, we’re looking to cut back in the wrong places.

To continue to listen to these sources of pseudo-scientific information and refuse vaccines on personal whim is irresponsible and only helps perpetuate the spread of dangerous attitudes. It seems that for a generation who proclaims their love for Bill Nye, the regard for science as a source of authority has ironically gone out the window.