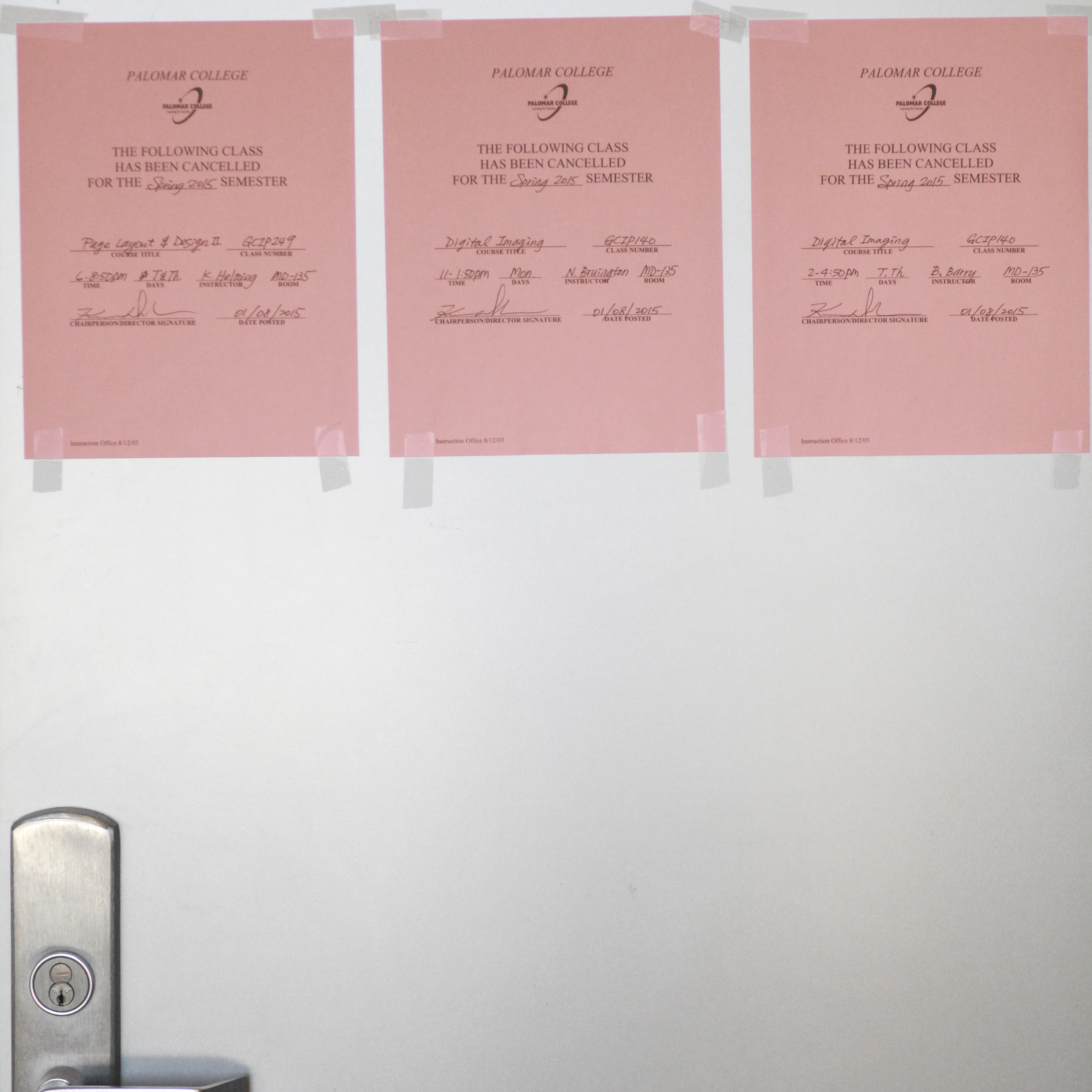 Classes were cut before the Spring semester at Palomar College even began due to low enrollment numbers, according to officials. So far, 160 classes were cancelled this semester.

The decision to cancel classes was based on low student enrollment. However, during a Jan. 12 Faculty Senate meeting, many professors agreed this decision was made hastily behind closed doors.

But, according to Vice President of Instruction Berta Cuaron, the decision on which classes were cancelled was made between deans and department chairs or program directors. She said it was a tough decision the college was faced with.

“(We) make that decision earlier rather than later to give the student a chance to enroll in other classes,” Cuaron said.

Cuaron said that class cuts were made depending on the needs of a certain department, rather than by a class-by-class basis.

Some classes were kept even with less than 20 enrolled because the program needed it for students to graduate, such as a language class or if the class hasn’t been offered in a while.

According to Teresa Laughlin, Palomar Faculty Federation lead negotiator, classes with 15 and 16 students were being cancelled a week before school began Jan. 12.

She said the college threatened to cancel two of her history classes one week prior to the beginning of the semester. One had eight students enrolled and the other had 16. After begging to keep at least one of the classes, by the first day of school the class had grown to 32 students.

“It doesn’t make any sense to cancel (classes),” Laughlin said.

In past semesters teachers usually had the chance to meet students on the first day and try and get enrollment numbers up, but this semester classes were cancelled sooner, Laughlin said. She added that it was because the school wanted class sizes to reach 35 or more.

The number 35 comes from the State. The State assumes an average class size in community college is 35 students and that is how money is distributed. When a class has fewer than 35 students, the college has to pay the difference. Canceling classes saves the college a little money, according to Cuaron.

In the most recent faculty labor contract, it states that a class can be cancelled two weeks before the semester if there are less than 10 students enrolled.

The class can also be cancelled one week prior to the semester if there are less than 20 students. Once a class reaches 20, the college is prohibited from canceling it.

She said she believes students will just go to another college if the class they need is cancelled instead of enrolling in a different course at Palomar, thus having the college lose money.

Laughlin said eight students in one class more than pays for the class, so canceling it with 15 students already enrolled is only one way of measuring efficiency.

It isn’t just about Palomar losing money, but about the “human cost,” Laughlin added. Students are inconvenienced and slowed down. Also, part-time teachers lose out because they depended on these classes to pay their rent.

The Faculty Senate is looking to have this issue placed as an agenda item in future meetings.

It costs roughly $3,500 to run one class, according to Cuaron. However, this only covers the cost of faculty salary and doesn’t take into consideration all the additional costs of running the class.