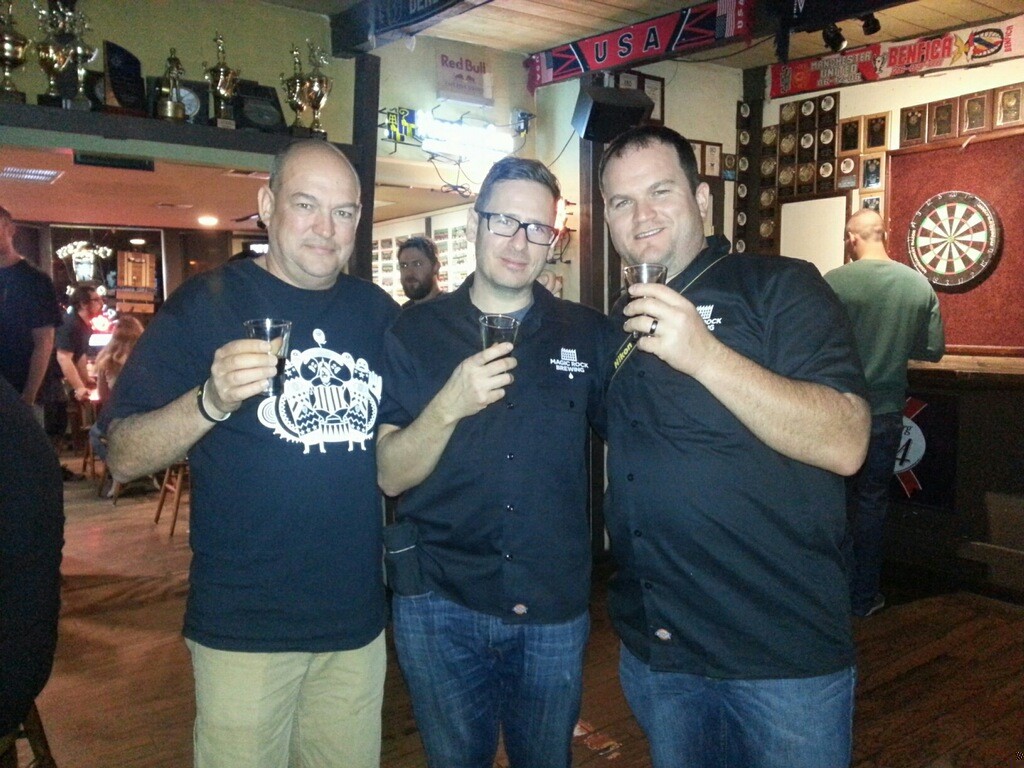 As Prime Minister of the United Kingdom, winner of the Noble Prize in literature, and one of the greatest wartime time leaders in the 1920s, Winston Churchill is revered for his momentous words and actions. If you ride down San Marcos Boulevard by Restaurant Row, you will see a glamorous pop-art mural of the man himself by artist “Tez.”

Ivon Derezin, beer aficionado and owner of Churchill’s, said he was inspired by English pubs in the U.K. and wanted to bring a re-creation of that old pub-feel and décor to San Marcos. Atmosphere adheres to customers young and old who are transported and given a taste of England in this “public house.” It taps not only over 50 craft beers from around the world, but excellent food and fresh kitchen fare provided by head chef Ryan Adams.

“All things being equal, atmosphere is really what really makes Churchill’s stand head over heels over our competition.” said Derezin.

For those who look for a purely craft-beer-serving location, Churchill’s is a prime location for the true beer connoisseur. Joseph Lianas, a beer distributor for Churchill’s, informed The Telescope that when Churchill’s opened 10 years ago, it was open to domestic beers. However, soon afterward, the owners decided that they would not fall victim to the monolithic outreach of Anhueser-Busch and its outpour of domestics, Budweiser, Coors and Miller were eliminated. Now, Churchill’s stands as a strictly craft beer serving location.

Churchill’s recognized the benefit of craft beer dominance having only the desire to supply beers of a higher standard fitting into their preference and tastes, the atmosphere in the pub is defined in accord with the brews they provide.

This pub can fit over 100 people in the outer area with blazing bonfires next to a mural of Churchill, inside English décor coupled with old wooden tables, pool, darts and dim lighting. Lots of mirrors provide good accommodation to frequent drinkers, reflecting ones’ face to view affects of intoxication, reminding one to not get too carried away.

“It’s old, and it has a wide variety of demographics.” Rose Algove, 23, said.

The connection between Churchill’s and Magic Rock was born three years ago.

The media exposure coupled with an unlikely meet where Tony Dowson, a bartender at Churchill’s and fellow Englishman from Skipton, recognized Richard Burhouse in neighboring brewery, Lost Abbey. It created a business opportunity for Churchill’s to showcase Magic Rocks fantastic brews for 2014 Beer Week.

“I found them on Twitter. Social media is everything.” Burhouse said.

Ranging from over five different beers on tap from Magic Rock, these beers were kegged and shipped overseas for Beer Week. The Bourbon Barrel Bearded Lady came highly recommended. A taste from the Imperial Stout, dark, robust with rich coffee notes, vinous berry flavors and a subtly soft spicy hop profile, solidified my reasoning behind choosing craft beer over all others.

“It’s aged in Sherry barrels, you will never see this in the U.S. again.” Burhouse said.

These seasoned Magic Rock brewers shared enthusiastically and abundantly the knowledge behind their brewing science during the stay, with many kinks and processes in their brewing trade.

“We are bringing an American twist to U.K. beers.” Shoefelt said.

Lianas, 33, an employee of three years starting as a bouncer and now assisting with the distribution of craft beers, gave insight to the popularity of Churchill’s in the brewing world and how sought after connection’s with this pub is cherished.

“We don’t usually ask them for their beers, they come to us.” Lianas said.

Jon Avella, 34, and the general manager of Churchill’s spoke with The Telescope on why the location of San Marcos was chosen.

Not only is it in a prime location; Churchill’s was voted Best Bar of North County in the Sign On San Diego’s readers poll in 2006.

Beer week will continue for Churchill’s until the 16th of November continuing to supply many more interesting and outstanding beers flooding in from renowned breweries locally and around the world.