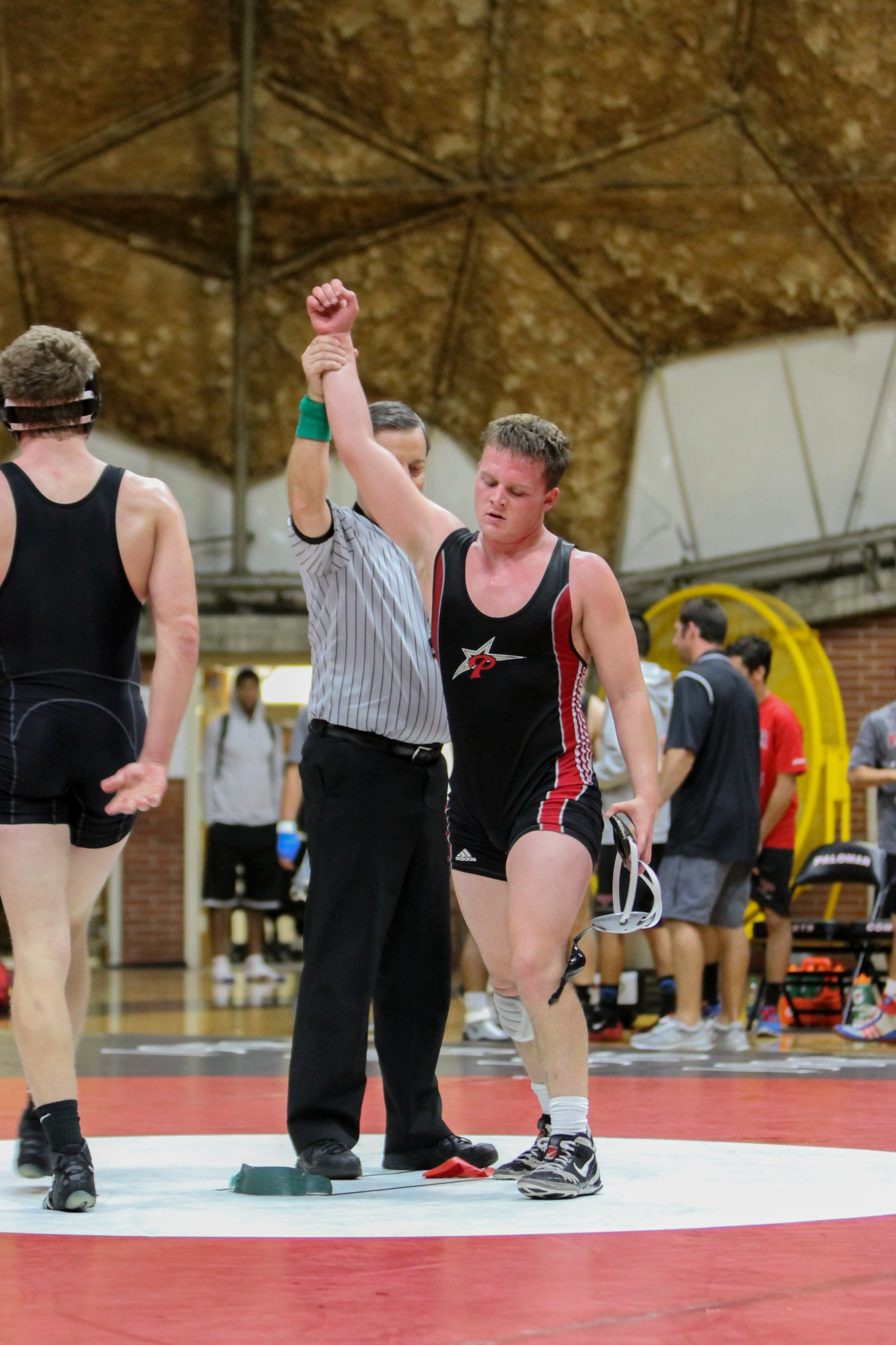 Tucked away in a small set of rooms adjacent to the Dome, the Comets wrestling team is busy at practice. Diligently going through fundamental drills, the frequent whistle blow by Head Coach Brody Barrios sequences the wrestlers from one exercise to the next. Alongside assistant coach and father Don, Barrios is working to help his squad continue the storied history of Palomar wrestling.

So far this season, they’ve been fairly successful.

After finishing in fifth place at the California Community College Athletic Association (CCCAA) state tournament last season, the wrestling team started its campaign with a very strong performance at the Mt. Sac Duals in September. Winning all four of their matches, the Comets’ sweep clinched their third straight victory at the tournament, defeating the 4th (Santa Ana) and 3rd place (Mt. SAC) finishers at state in the process.

“We had a good core group of guys that put in pre-season training sessions, so when they came in at the beginning of the semester already in pretty good shape, we were able to move at a faster pace and get a lot of the fundamental techniques and drills done over the summer,” Barrios said.

“Conditioning was a big part … from when the season starts to the first competition there’s not a lot of time to get in shape,” he added.

The hard work is paying off. Coming off the opening Duals win, the Comets continued with a respectable fifth place finish out of 24 teams at the Santa Ana tournament earlier this month.

The performance of Comets wrestler Graves during the competition caught the attention of the Pacific Coast Athletic Conference (PCAC), who honored Graves as their male athlete of the week Oct. 4. In his first match, it took Graves only 10 seconds to pin and defeat his opponent. With an 11-4 win in the final match over his Mt. San Antonio competitor, the freshman from San Marcos High School placed first in the 184 pound weight class.

Palomar wrestling has had an illustrious record over the years. Starting with John Woods’ 16-year tenure as head coach from 1973 to 1988, during which time the Comets won six state championships, knowledge of the wrestling craft has been passed down from coach to coach.

“I grew up around this wrestling program at Palomar. My dad wrestled at Palomar for Coach Woods. A lot of my knowledge came secondhand from him. It’s a privilege to be following those guys I grew up looking up to,” Barrios said.

Coach Barrios takes a break from the interview to whistle his squad into the next set of drills.

“Wrestling in San Diego, it’s all right here at Palomar. We take a lot of pride in that and try and instill it in our guys,” he said.

An assistant coach at Palomar since 2006, Barrios became the seventh wrestling coach in school history in 2011. During his wrestling career, Barrios was a two-time state champion at Poway High and is also head wrestling coach at nearby San Marcos High School.

Freshman Erik Collin previously wrestled at San Marcos High under Barrios and has been a part of the team’s success this year, losing only once.

“It’s nice to know your coach. I’ve been with him five years now. He knows what we need to do to be ready,” Collin said.

Part of what makes the team successful is the depth and competition in the squad and getting to train against that daily at a high-level.

“We work out pretty hard during the week, everyday so we get a lot done,” panted Collin, taking a brief break from practice to talk about the team before running back into the gym.

The Comets compete next in the Meathead Movers Tournament on Oct. 25 at Cuesta College in San Luis Obispo.

With just two months until the state tournament on Dec. 12-13, the team will look to improve upon its fifth place finish of the past two years.

“This sport is so physically and mentally demanding so a big part of it is keeping everyone healthy. These guys continuing to push themselves is going to make the difference,” Barrios said.