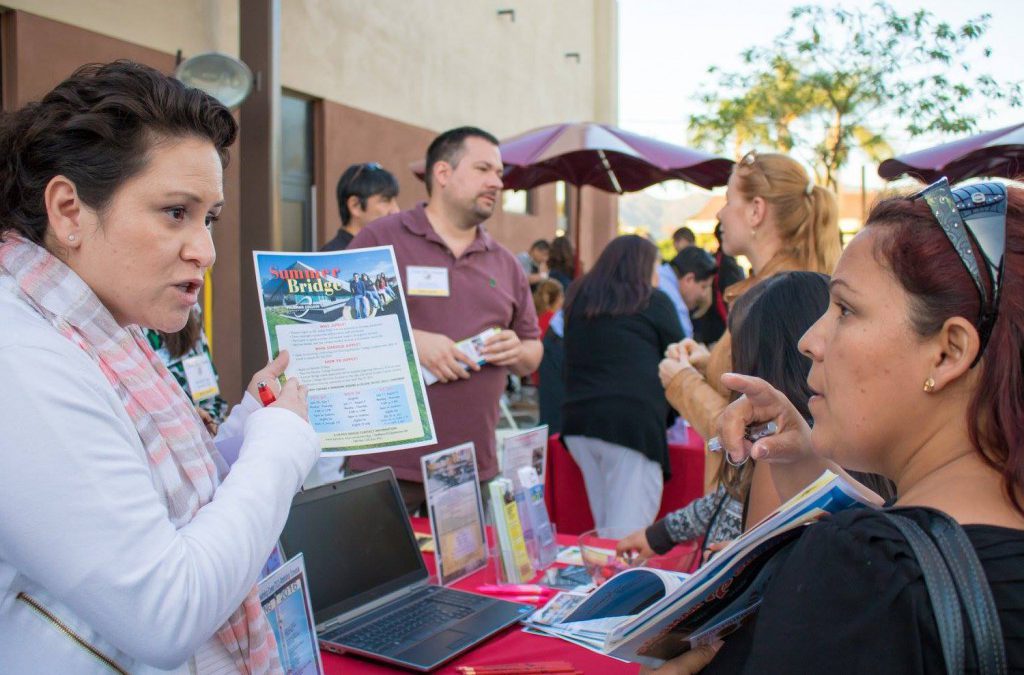 Building on a foundation of student advocacy, dedicated faculty and staff at Palomar College spent decades dismantling prejudiced systems, and making the campus a welcoming place for underserved communities.

SAN MARCOS — Following the turbulent 1960s and ‘70s, Palomar College took its first steps toward overturning systemic racism with the creation of the first academic departments dedicated to multicultural studies.

But the campus was still inaccessible to many within the Palomar Community College District who didn’t speak English, or whose ethnic identity left them feeling isolated from higher education.

The next steps in Palomar’s progress would include the expansion of English as a Second Language (ESL) and a number of other programs and initiatives that brought the idea of inclusion and diversity to the forefront of campus life.

“For decades, many people here at Palomar College worked together to realize their shared vision of a campus that is truly inclusive and welcoming of all people,” said Interim Superintendent/President Dr. Jack Kahn. “We do well to remember how much time and effort it took to open the doors of this institution to the whole community in a meaningful way.”

With each step, from ESL classes to the Pride Center to a series of campus events known as Tarde de Familia, Palomar opened its doors wider to those who had previously been kept out.

Prior to the adoption of the federal Immigration Act of 1965, ESL instruction was closely tied to citizenship requirements.

Patricia Zevin, the first ESL Department Chair at Palomar, recalled that in 1969, “Palomar College Bilingual Centers were initiated as a community program designed to meet the language needs of 13 Spanish-speaking mothers enrolled in ESL.” 1

By 1977, Palomar was operating Bilingual Centers in San Marcos, Escondido and Fallbrook. The program continued to grow and, in 1986, added citizenship and other classes to enable students to meet U.S. residency requirements under the Immigration Reform and Control Act of 1986. In 1994, enrollment had grown to nearly 1,900 students.

Throughout the last 40-plus years, the program steadily expanded to include more services, reach more off-campus locations, and serve more of North County’s growing Spanish-language population.

“A lot of the process is trying to take away the barriers people encounter,” said Palomar’s ESL Department Chair, Tracy Fung. “The college has shown strong support for our ESL students, who are extremely diverse. All of that is key to supporting the most vulnerable students in our community.”

Most recently, Fung said, the program has expanded its non-credit offerings—courses and programs designed for students who want to learn English but don’t need academic credit. One ESL class has also been added that fulfills a college composition requirement, equivalent to ENG 100. “That’s a huge step for our college: transfer-level composition with English language support,” she said.

Today, the ESL program includes dozens of employees, including faculty, advisors, and staff who help with registration and other processes that can be a barrier for those who don’t speak English and aren’t familiar with the higher education system. There are ESL offices at the main campus and the Fallbrook and Escondido education centers. And, under normal circumstances, Palomar provides ESL classes in a wide variety of community locations across the district.

Maritza Koeppen, Superintendent of the Vallecitos School District in Rainbow, said that Palomar started providing ESL classes at her district’s location just south of Temecula two nights a week after she met with Dr. Kahn to request ESL support.

“We feel like being able to support your child is important for their success, and parents who are eager to learn English may not have the time to go to school during the day,” said Koeppen. “I think the benefit really is for them to be able to support their kids, and also communicate in English with people in the community.”

Koeppen said her staff promoted the program to parents, but also at the commercial nurseries near the school in Rainbow Valley. In her previous capacity as Director of Special Programs for the San Marcos Unified School District, she worked closely with Palomar’s ESL program, and she said she sees the college as a force for positive change in the communities it serves.

Alongside the rapid expansion of ESL programs, faculty and staff on campus began to identify a new set of needs to be met outside of the classroom.

When Rodolfo Jacobo arrived at Palomar in 2011, he recalled, “A lot of the students in my Chicano Studies courses reminded me of myself at their age—first-generation college students, working while taking classes. When I would ask them about transferring, not many of them would raise their hands.

“I knew that education was the key to breaking the cycle of limitations and low income,” said Jacobo, who is now the chair of the Multicultural Studies Department.

So in his second year, Jacobo created a series of Palomar-hosted events—one per semester—to help give students and their families a vision of what higher education can do for them. Tarde de Familia, as it is still known, began humbly, with about 25 people at the first event: “Then it began to grow,” said Jacobo.

“The idea was to have an event where Latino professionals, who came from the same background as my students and myself, would speak to them,” he recalled. “We began to go out and invite Latino professionals from different careers—engineers, firefighters, people with MBAs.”

They were asked to discuss their backgrounds, college experiences—especially what it takes to overcome obstacles—and their professional careers.

“The goal was not only to help students see themselves in the future, but also to create a network,” said Jacobo. “I would tell my students, ‘I want you to go up after the talk, engage with these professionals, and get their business card.’”

The other aspect of the program—and what provided its Familia name—was inviting parents to participate.

“We really felt it was important for the parents to come to campus and feel that they had some ownership of the academic space themselves,” said Jacobo. “When I was in college, my mom and dad felt really disconnected from the system. It was very important to invite parents to come and meet the faculty, see the campus where their sons and daughters were taking classes.”

Jacobo recalled that, when Dr. Kahn came to Palomar as an academic dean, he invited him to Tarde de Familia.

At the same time, Palomar was taking the program off campus, to other strategic locations.

“An obstacle for us, especially with first-generation, Latino students—and particularly those who are impoverished—was that, even though Palomar provided this wonderful event with food and networking and speakers, our families still couldn’t get to campus,” said Bispo. “Palomar said, ‘We’re going to leave our campus, and we’re going to bring our resources out into the community.’”

The event was held at Vista High School in early 2019, said Bispo: “It was really cool to host a Palomar College event within our community to provide greater access.” 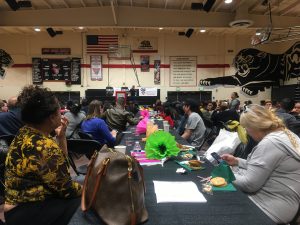 Bispo said she has also helped facilitate Palomar campus tours for families from Vista, and recalled, “I’ve actually seen parents enroll at Palomar, or take some other action for their personal development, after visiting the campus.”

She said she considers Palomar a powerful partner in the work of dismantling social injustice in North County: “Our two organizations work so well together because we share an understanding: this is what society looks like, and this is what career and college looks like for our marginalized students. It takes all of us working together to address reality, to see how we contribute to the negative stereotypes, and what we need to change.”

Collaborative Support from the Pride Center

As the effort to dismantle racism and exclusion gained momentum at Palomar, it drew support from various groups, including the Pride Center, whose supporters have been an active and vocal presence on campus.

In the late 2000s, a group of students, faculty and staff formed the Palomar College Committee to Combat Hate (PC3H), which was focused on supporting the LGBTQ population on campus.

Many of the problems the committee was confronting were shared by other groups, and from the beginning, said Pride Center Director Abbie Cory, her team was collaborating with the Black Student Union, M.E.Ch.A. and other race- and ethnicity-based organizations.

“People of color have always been part of the LGBTQ community at Palomar and other places,” Cory said. “We frequently have queer people-of-color discussion groups, and we try to think, plan and program with all of our various constituents in mind.”

Cory, whose Pride Center has grown from a single small faculty office to a 600 square-foot space, said that she is encouraged by the antiracist efforts now underway at the college.

“I think since the events of this past summer, we are making amazing change,” she said. “I see all of the statements of support for the antiracist work that is happening on campus, and Dr. Kahn and other leaders are doing so much to support people of color and lead that change.”

In the last several years, as Tarde de Familia saw participation rise sharply, a team of Palomar faculty and staff launched ALASS, the Association of Latinos and Allies for Student Success.

“It was a way of connecting the community to Palomar College,” said Izabel Solis, Counseling Services Supervisor and the president of ALASS until last spring. “We want our Latino students to feel that our campus belongs to them—that they belong here.”

Together, the group created new events, like the Undocumented Student Week of Action, and continues to strategize about how best to create a welcoming campus for students like Dreamers, whose residency status under the DREAM Act has recently been threatened.

Leslie Aguilar, who serves as an Outreach Specialist in Palomar’s Extended Opportunity Programs & Services (EOPS), said that ALASS is focused on helping students see what education can do for them.

“In the last couple of months, there has been an open dialogue (within the campus community) about the experiences of different cultures,” said Aguilar. “We’ve also been talking about how we can shed light on those voices that maybe didn’t have a place to voice their concerns.

“We want to make sure every student feels that their culture and their needs are reflected in the campus experience,” added Aguilar.

“It’s amazing, the work that Palomar has started,” said Solis. “However, we still have a lot of work to do. But people are willing to learn and willing to share what they learn—and that’s a big accomplishment.”

A Brighter Future on the Way

Those who were involved in the effort to open Palomar’s campus in the 1990s, ‘00s and ‘10s say that the work often advanced without much fanfare.

But whether it was taking ESL classes into the community, partnering with allies at the Pride Center, or bringing families together to celebrate higher education, their efforts positioned Palomar College to become a truly inclusive and welcoming place for all students.

1  A detailed history of the origins of the ESL Department in the early 1970s was provided by Zevin in her doctoral dissertation, “An Interdisciplinary Approach to Bilingual Bicultural Education: the Palomar College Model” (United States International University, 1977). The relevant portion of Zevin’s dissertation and a brief history of the ESL program by Katheryn Garlow appear in Palomar College Golden Jubilee, published in 1995, pp. 426-427.