A Deepening Commitment to Antiracism in Palomar’s Recent Past 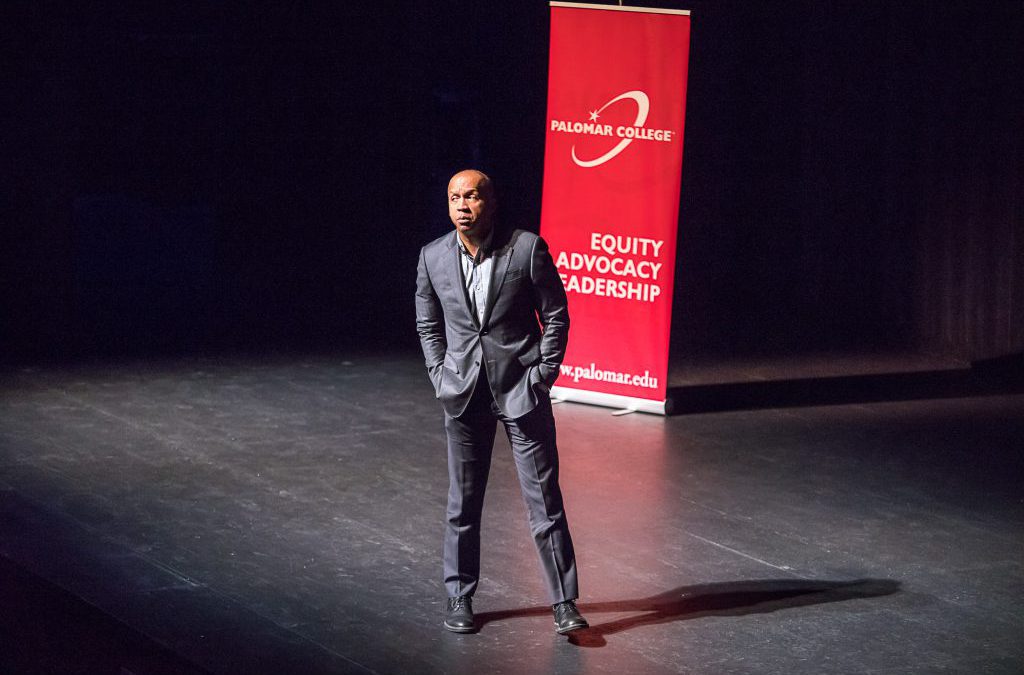 SAN MARCOS — In the years leading up to the turmoil of 2020, momentum was building within an antiracist movement that encompassed a variety of programs, coalitions and departments at Palomar College.

The moving parts have not always been formally connected, but they have been working for the same end, participants say: a more equitable and accessible institution.

“The work that was done within the last five to 10 years at Palomar was crucial to positioning the college for the strong commitment to antiracism that we’re now seeing across the campus,” said Interim Superintendent/President Dr. Jack Kahn. “In terms of academic equity, while we still have a lot of work ahead of us, some incredibly inspiring things have happened to get us where we are today.”

Especially impactful has been the establishment of an Office of Student Success & Equity, tasked with identifying students who are “disproportionately impacted” at Palomar and leading the effort to provide them with better support.

Olga Diaz came to Palomar in 2015 as the first Director of Student Success & Equity. She characterized her team’s work as an important part of establishing the foundation of the antiracist culture that is now developing on campus: “We know which populations we need to support in a better way, and we have worked to establish programs, structures and supports to help make those students successful,” she said.

Diaz, who in 2008 became the first Latina elected to the Escondido City Council, said that she has focused on maintaining a dialogue about diversity across the college.

“We are gaining an overall better understanding among faculty, staff, students, administrators and board members—elevating the notion that we need to have more intensive support services for students who are struggling,” said Diaz.

The institutional work performed by Diaz and her team is driven by a Student Equity Plan, which formally identifies underserved student groups and lays out “focused interventions to increase student success.” 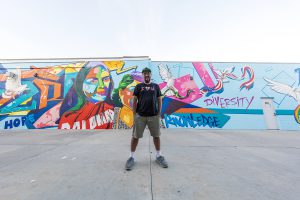 The L.A.-based artist Man One stands in front of the mural he painted at Palomar College in 2019.

The Office of Student Success & Equity has also pioneered a variety of programs and partnerships, including the ongoing Student Equity Film Series and collaborations with San Diego State University’s Equity Lab and other regional institutions.

It has led student educational excursions to the Museum of Tolerance and Homeboy Industries, both in Los Angeles.

And it negotiated two “significant art installations,” including the equity mural “Futuro” by Man One at the Student Union, as well as the Kumeyaay bird singer statues that are planned for installation in front of the Library/Learning Resource Center (LRC). The sculptures were brought to Palomar through a partnership with Valley View Casino, and were created by Johnny Bear Contreras, a nationally recognized local artist who learned bronze working at Palomar College.

Besides its often behind-the-scenes efforts, the Office of Student Success & Equity is widely known in the community for the Student Equity Speaker Series, which has brought a number of high-profile, nationally known leaders to North County.

In March 2018, the lawyer and social justice advocate Bryan Stevenson spoke to an audience of more than 1,000 people at the California Center for the Arts, Escondido.

The author of “Just Mercy” and executive director of the Equal Justice Initiative, Stevenson spoke about “how we can support those among us who are lost in systems of oppression,” Diaz recalled.

Before his visit, she said, the college bought 1,500 copies of “Just Mercy” and gave them to faculty members who committed to reading the book with their students in preparation for hearing him speak. The event was free and open to the public.

“Students feel connected when they meet these impressive figures,” said Diaz. “I still get notes from students who have graduated and moved on: ‘Bryan Stevenson really impacted me.’”

The Student Equity Speaker Series has also hosted Alex Montoya, a local motivational speaker who worked for the Padres, and Dolores Huerta, who co-founded United Farm Workers with Cesar Chavez. 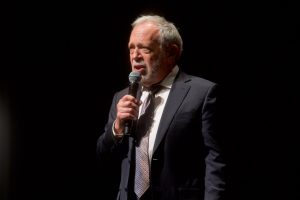 Robert Reich speaks at the California Center for the Arts in November 2018.

In November 2018, following the wildly successful Stevenson visit, the UC Berkeley professor and former U.S. Labor Secretary Robert Reich spoke to some 1,200 people at the California Center for the Arts, Escondido.

“Inspiration is what changes lives,” said Diaz, adding that it is especially important for those who feel disenfranchised or otherwise shut out of the higher education system.

In particular, she said, the Stevenson engagement “left a lasting impression. In that one event, as a community college, we impacted the entire region.”

During the same semester as Bryan Stevenson’s visit, Spring 2018, the first Palomar College professor walked into the Vista Detention Facility to teach a sociology class for inmates there.

It was an early step for the now-thriving Transitions Program at Palomar, which provides instruction for incarcerated people at the Vista jail, as well as support on campus for formerly incarcerated students.

Nora Kenney-Whitley, the program’s coordinator, said that Correctional Education represents one of the most important frontiers in the fight against racism and inequality.

“At Vista, there are, at any time, 15 to 20 students taking credit-bearing, transferable courses, and working on their degrees while they’re incarcerated,” said Kenney-Whitley. “When you look at that population, you can see that it reflects the disproportionate number of black and brown people who are caught up in the criminal justice system. 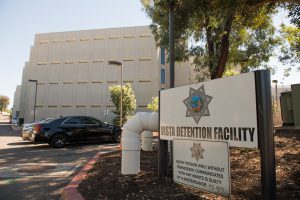 “It’s widely known that people from underserved communities—people of color, and indigenous folks—are arrested and sentenced at greater rates than their white counterparts,” she added.

As an example, Kenney-Whitley cited the case of a student who received two life sentences for stealing a T-shirt from a local department store under the former Three Strikes law. When “Three Strikes” was overturned and he was released, the man went straight to college and is now a student at UC San Diego, and a partner to Palomar’s Transitions team.

The bottom line, she said, is that because of the racial disparities in arresting and sentencing, Transitions’ work is antiracist work.

Decades after the first academic moves toward racial equity at Palomar College, various leaders are still carrying the torch, opening doors for minoritized students in their disciplines.

At the forefront of this movement is Dr. Mireya Gutierrez-Aguero, the Supervisor at Palomar’s STEM Center.

“I genuinely believe—and I think people are recognizing more and more—that in every race and ethnicity, we have geniuses,” said Dr. Gutierrez-Aguero. “We have geniuses who may not realize how talented they are.”

She said she sees the disparity in terms of “untapped potential.”

“In the past, as a country, who was STEM for? Basically, white men with money. That left out a lot of people,” she said. “As we look to become creative and innovative, we truly need to work collaboratively in regard to including as many races and ethnicities as possible. We learn so much more from each other, rather than just giving opportunities to a few select people.” 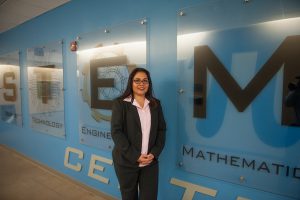 Dr. Gutierrez-Aguero, who came to the college in June 2011, said that the STEM Center has been a hub of collaboration, serving some 1,900 students every year: “It was critical to us to make sure that, in our STEM Center, we created a space and a place of belonging for all students, regardless of their race, their gender, their socioeconomic status. The center is that place for students who dream of earning degrees in STEM.”

People of Color, she said, frequently encounter racism that takes the form of being encouraged to pursue other, less ambitious fields—encountering teachers and others who don’t believe in them.

“But at the STEM Center, we send the message that this is for you,” she said. “If you put in the effort, regardless of your race or ethnicity, this is something you can do.”

STEM is especially important in reversing racial disparities because of the income potential it represents: “This is where the opportunities are, in terms of income,” said Dr. Gutierrez-Aguero. “We know higher education provides that social mobility—it is the great equalizer, so it’s important for us to promote STEM. It’s only fair to our entire community.”

“People of color, and women, have been kept out of these disciplines. We are missing out on some of the most resilient people—individuals who know how to persevere and figure things out,” she added. “But these disciplines are for everyone. Anybody can succeed, given the right support system.”

She also said the college is working to streamline STEM Pathways by collaborating with four-year universities and other institutions “to ensure students have access to opportunities to successfully transfer to their university of choice.”

From student protests in the 1960s to bringing ESL and other services to local communities to making recent institutional changes in support of underserved students, the history of antiracism at Palomar set the stage for the widespread activity that would begin in 2020.

The next story in this series will highlight the ongoing antiracist work that took on new urgency at Palomar in response to the national unrest prompted by the death of George Floyd in Minneapolis.