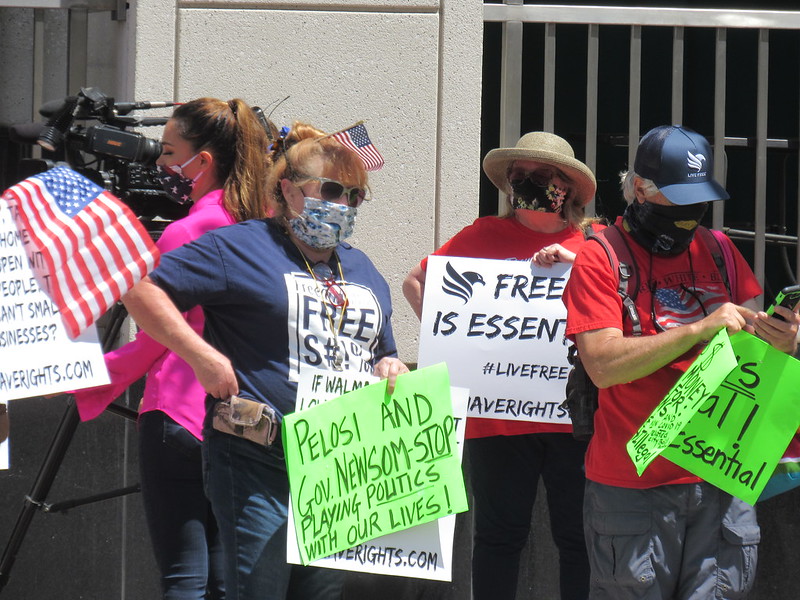 Hundreds of people gathered Friday, May 1, in front of the Hall of Justice in Downtown San Diego to protest against Governor Gavin Newsom’s extended lockdown. While rally organizer Dan Summers said that protesters “will be socially compliant [with] six-foot spacing and we’ll have our masks,” about a third of them wore one and almost nobody kept such distance.

These reopening rallies are scattered throughout the U.S., from typical ones like in California to gun-toting men and women who stormed the capitol building in Lansing, Michigan, on April 30.

Extremists aside, most of the current protesters waved American flags, sported the signature red caps, and held up signs like “Liberate America,” “Abreit macht Frei,” and “I WANT A HAIRCUT.” However, many of those who favor the reopening are probably like your neighbors who run a small business and fear that they will lose their livelihood with the lockdown.

The protests movement is a sign that the U.S. is divided into two primary ideological factions that reflect the current American politics. One side favors the stay-at-home order to curb the spread of Covid-19 until a vaccine is developed, while the other side favors reopening some or all businesses while practicing social distancing, proper sanitation, and limited gathering in any one place.

Despite the obvious differences in thinking, Reason magazine’s senior editor Brian Doherty argued that neither side should be “blithely written off as either idiotic or sinister or not thinking” because many on either side are not understanding the others’ values.

People who want to open up not only fear of prolonged unemployment or losing their business, they may also worry that too much government spending, such as six months of stimulus checks and small business loans, would expedite government debt and drive demand-pull inflation, where the demand for goods far exceeds an economy’s ability to produce them.

Also, more than 26 million jobs lost in five weeks will decrease demand for many goods and services, which may force many businesses to shut down.

Some also believe that the lockdown is the government encroaching on personal lives, hence the protests. They may feel threatened by the closure of many places, like parks, beaches, and services.

Those who favor the lockdown empathize with the other faction’s worry of the economic woes and uncertainty of the near future. But they see the costs vs. benefits of opening up the economy differently.

They recognize the extensive damage Covid-19 had done to our healthcare system, the number of lives taken around the world, and the suffering of the infected and their families when patients die alone in hospital rooms.

They understand that someone who is infected with Covid-19 and show no symptoms can still infect many others in their daily routines.

Even those who recover suffer from life-long lung scarring and chronic liver and kidney injury.

While both sides have valid reasons to open or close the economy, the data still shows that there is no slowing down of Covid-19 cases and deaths in San Diego and the rest of the nation. An “opening back” of the economy—even with proper precautions taken—would still be risky enough to spark another wave of infections.

Similar to the second wave of the Spanish flu of 1918 that killed 195,000 Americans in October, this would overwhelm many hospitals, health care workers and systems, where many patients would not get proper treatment, should a second wave hits.

Because of lockdowns and social distancing, many countries are already experiencing a downward trend of Covid-19 infection rates and are easing lockdown restrictions, such as New Zealand, South Korea, and Germany. Many of these countries have much fewer or no protests. If Americans want to open the economy, they should look to these countries to see what they did right. No protests needed.

The bottom line is that while economies can recover, as they have in the past, even if it struggles for a generation or two, the dead – family, friends, the smiling cashier who asks about your day – can not be resurrected.