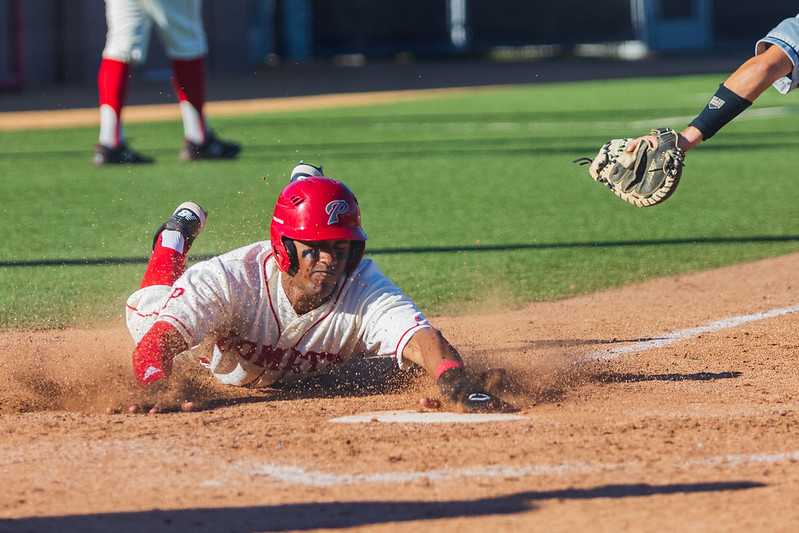 Spring is upon us, and that means baseball is back in action at Palomar.

The 2020 season kicked off with Palomar tying with Southwestern College in the Pacific Coast Athletic Conference preseason sports information directors’ poll. They were runners-up to San Diego Mesa College, the favorites to take the PCAC crown this spring.

The Comets are fielding many first-year athletes after 17 players transferred to four-year schools for the 2019 season. Ben Adams, who is in his second year as head coach, is leading 18 freshmen and 14 sophomores.

With the exception of one lone returning player, the pitching staff consists entirely of new faces. As a result, Adams simply wants to focus on improving as the season progresses.

“Our challenge is basically to get the pitchers to mature as the year goes along,” he said, “Our offense should be there, it’s just a matter of getting better on the mound.”

Adams is expecting several of his top players to take some of the pressure off of his young pitchers. He mentioned several veterans, including first baseman Evan Ianniciello and outfielders Noah Hemphill and Cameron Rowles, as key athletes. He also noted freshman catcher Alec Jones.

Last season, Ianniciello only had one error at first base and had a fielding percentage of .997. Rowles’ fielding percentage was .957, while Hemphill batted a solid .366. Jones had four hits and two RBIs in his first two games as a Comet this season.

“…I think that we just need to have our goals geared towards getting better as the season goes along,” Adams said, “And not so much base everything on how we start, but how we finish.”

The Comets’ next home game is 2 p.m. on Feb. 12 against Pasadena City College. The baseball field is located above the northernmost parking lot on the San Marcos campus.

Palomar Women’s Beach Volleyball is gearing up for the start of their 2020 season.

Head Coach Karl Seiler is leading 13 Comets this year, and over half are freshmen.

The 2019 season concluded with an overall record of 2-14, but Palomar still sent a pair of athletes to the regional playoffs. The team, consisting of Mikayla Seiler and Noemi Ramos, was the tenth seed representing the Pacific Coast Athletic Conference.

So far, the Comets have played two scrimmage matches this season.

Beach Volleyball’s next away game is scheduled for 10 a.m. on Feb. 28 against Rio Hondo, followed by a 12 noon matchup versus Santa Ana. Both will be held in Huntington Beach.

Home games are to be hosted at South Carlsbad State Beach.

Palomar Men’s Volleyball is back on the court looking to pick up where they left off.

The Comets, led by Head Coach Bryan Campbell, are coming off of a successful end to the 2019 season.

The team finished 6-9 overall and 4-2 in conference play. A high point of their season was the final game, when the Comets conquered the undefeated Grossmont Griffins in five sets.

The Comet’s first game is away on Feb. 20 at Irvine Valley College, and their first home game is scheduled for 6 p.m. on March 4 versus Orange Coast. Palomar hosts at the Dome next to the swimming pool on the San Marcos campus.

Palomar’s Softball team swung into the 2020 season coming off of last year’s 41-7 record and second-place finish in the state with 15-1 in the conference.

The Comets won their first three games, continuing an 11-game win streak from 2019. They started off with two huge home wins versus Chaffey and Mt. San Jacinto, defeating Chaffey 6-0 on Jan. 24 and then Mt. San Jacinto 18-0 on Jan. 29.

Their first away game was versus Pasadena City on Jan. 29, which ended in an 8-4 win. This was the first game of the season that the Comets allowed a run. It took place at the bottom of the second inning. The Comets had already scored three runs in the second inning and followed their first allowed run of the season with a 3-0 in the third inning to get a hefty lead on Pasadena.

The Comets’ batting average so far is .429. Scoring 32 runs from three games is a solid start for the team. Their overall record is 3-0 and they hope to improve it in their next away game versus Santa Ana.

Some interesting statistics from this season:

The overall record this season is 32-4.

The Comets play on Palomar’s softball field located by the tennis courts off of Comet Circle and West Mission Road.

The season has teed off for the Men’s Golf team.

Coach Mark Halda, who also coaches the women’s team, will be leading the team and pushing for a strong season.

The Comets took on their first tournament of the season at the Pt. Conception Tournament at La Purisima GC in Lompoc. It was a two-day tournament taking place from Jan. 26-27.

They placed seventh out of 20 teams competing and scored 819 as a team over two days, scoring 401 day 1 and 418 day two. Reedley won the tournament scoring 378 and 404 to combine for 781. It was a solid starting tournament for the Comets.

Palomar placed fifth in the Orange Empire Classic on Feb. 3. As a team they scored 390, just three shy of Irvine Valley who scored 387. Freshman Michael Smith led the team with 75. Following him was Xavier Valles and Eric Bolander each with 78, Patrick Jaksch with 79, Kyle Hazlett with 80 and Milan Machaiah with 81. The team will look to improve on this scoring at their next tournament, the Eagle Golf Classic on Feb.12.

The Comets will host their first home tournament of the season on March 30 at St. Mark Golf Course.

The Men’s and Women’s Tennis teams are coming into the 2020 season with rosters filled with rookies.

On the men’s team, four out of the seven Comets on the roster are freshmen, including Nathan Buturla, Daniel Di-Matteo, Yuki Miyamoto and Jonathan Tran.

Four out of the six players are freshmen on the women’s team. Those freshmen being Mila Beentjes, Sarah Elizondo, Kathy Henderson, and Clare Reddick.

Kathy Henderson had quite a prolific first semester as she led Palomar Women’s Golf with some notable statistics. She qualified for the CCCAA State Championships by finishing T-7 overall and was also number 2 as an individual at the Southern California Regional Championships.

Tennis home matches will take place on the Palomar tennis courts near the Fitness Center.

The Palomar Comets hosted the Waterman Festival over the weekend of Feb. 7 and 8. This was the beginning of the season for Men and Women’s Swimming and Diving. The Comets dove into both individual events and relays during the swim meet.

Head Coach Jem McAdams and Assistant Coach Scott Lawson are feeling optimistic for the upcoming season and hope to improve from last year. Palomar Men’s Swimming finished third out of five at the Pacific Coast Athletic Conference last year, bringing home the wins in five out of the 20 events.

After this, Palomar has a busy schedule of upcoming meets. February will have the Comets competing in five meets, and another five in March.

April will be the month to look out for our Comets because they will be competing in two championship meets. The season ends with the final Swimming and Diving Championship meet hosted at 9 a.m. May 1 and 2 at Palomar’s Wallace Memorial Pool.

To see results from meets, go to Palomar’s athletic page for Swimming and Diving. https://palomar.prestosports.com/sports/mswim/index