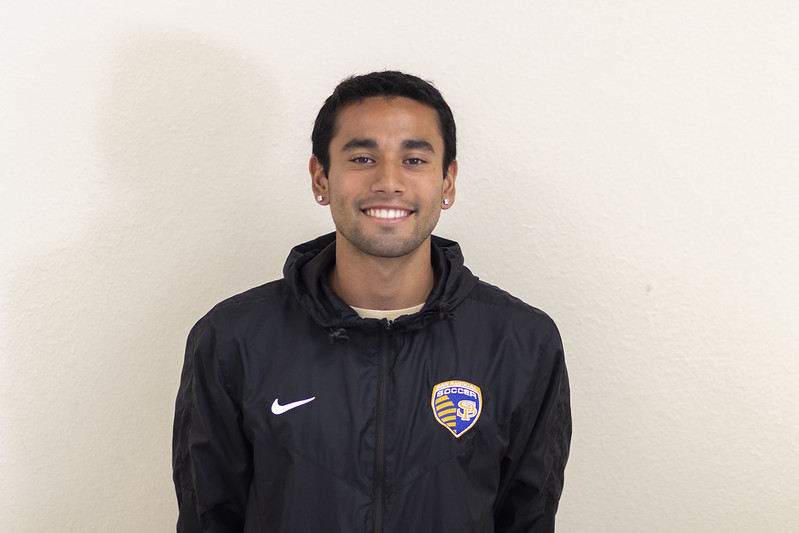 Arturo Soltero: living life on and off the field

A modest mindset has brought one young man to the front and center of Palomar’s soccer team.

Arturo Soltero has been playing soccer since he could remember, and now at the age of 20 he still is seeking the big moments he has always dreamed of. Wearing #9 for the first time ever, Soltero has earned this often soccer superstar’s number.

Scoring seven goals so far this season for the Comets, along with five assists, Soltero is second in the PCAC with 19 total points.

The Comets have a record of 5-3-4, which is already a better record than last year.

Soltero was born in Commerce, Calif. and moved to Escondido when he was five years old. Two years later, he was driven to the field, starting in his first ever organized league. Soltero’s close friend at the time, Kevin G. convinced him to play soccer, probably seeing what many see today, a star in the making.

Soltero transferred to Palomar College last year from Taft College, a public community college located north of Los Angeles. “I didn’t have the right mentality at Taft, even my overall fitness was poor but now I do. I had to make a change for myself,” Soltero said.

Since the summer tryouts of this year, Soltero has seen the potential of his squad here at Palomar. He hoped for a chance to win the Pacific Coast Athletic Conference and the team has done just that. He said, “We have had amazing chemistry this year, all the way from the start of summer. I believe in this team. I want to win, and I think we can.”

One of the most prolific athletes in history is Lionel Messi. A soccer phenom of Argentinian descent and Soltero’s favorite player also often has a quiet leadership on and off the pitch.

When talking to Soltero’s coach, David Linenberg, about this same thing, he had this to say, “Arturo is a leader among the team. Just like Messi, Soltero does so by example. Players have respect for what he can do on the field. He is gifted and this game seems to come easy to him.”

Things have not always been easy for Soltero. Switching schools to even deteriorating injuries, Soltero has had his setbacks. His senior year, in a very crucial time of his life, he broke his arm. This forced him to stop playing for almost the whole season. Soltero knew how important these games were and said, “That injury brought me to tears. It was hard, I didn’t know if I’d get the chance to play again.”

Off the field, Soltero really enjoys listening to Trippie Redd’s music and spending his time with friends. Often, Soltero goes to the beach in Carlsbad to swim but only when he doesn’t have homework to do. His favorite thing to do though is play Fifa 20 on his Xbox One, often playing as his favorite player’s team, FC Barcelona. Whether its real life, or a video game, Soltero is always playing soccer.