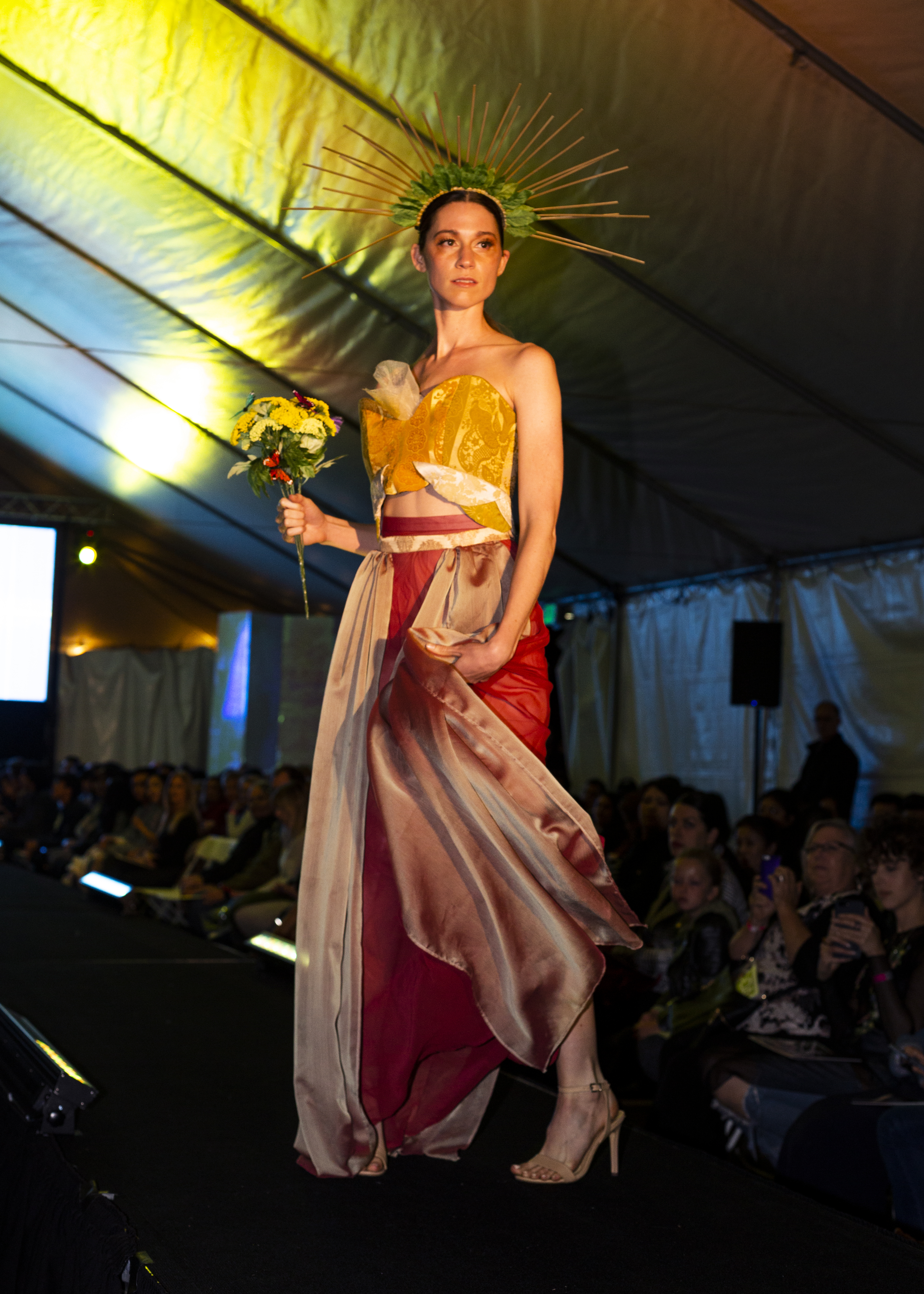 The fashion merchandising and design students of Palomar College showcased their talents at the MODA, Better Together Again Fashion Show on Friday, May 10th.

At 7 p.m. there was hardly an empty seat as a buzzing crowd gathered under an expansive white tent filled with color changing lights and bumping music. Parking Lot 9 at Palomar was the place to be.

Starting off in a playful manner guests were greeted by Pepper, Palomar’s own AI robot. If you’re thinking, “Wait a minute, Palomar has an artificial intelligence robot?” You’re not alone.

Pepper then introduced the guest of honor, former Palomar fashion student, April Yang. Yang welcomed everyone and shared her journey from Palomar College into the fashion world. Now a successful social media content creator, Yang gives styling tips to over a million of her followers.

Models of all heights, stature and gender strutted down the catwalk donning the latest creations of student designers of all levels. Guests saw looks designed from the sewing class, graphic design students, freshman and senior designers, Palomar alumni, Temescal Canyon High School students and many more under the umbrella.

There was no shortage of variety. From menswear, to prom looks, to festival fashion, pajama pants, winter headwear, couture and much more, the crowd cheered in adoration as they judged their favorite fashion moments.

Former Palomar student and designer, Anastacia Brumidis said, “It was beautiful. There was quite an array of styles, I especially loved the pajama pants.” She went on to complement the funky festival jackets of designer Kelly Thompson and clean, polished, dress-casual wear of Robin Clark.

Breaking up the 3 hour event, guests were treated to the musical talents of San-Diego based singer Aventine, who filled the tent with her powerful, in-perfect-key vocals. Later, Los Angeles based-performer Dev Kennedy captured the audience with his charm and melody.

Closing the show, Palomar’s senior designers showcased their own unique lines, consisting of five or more cohesive looks. From the bold, couture cuts by Shun Oyama to the flowy florals of Marielle Partido and animated inspired work of Kristina Miller, Palomar turned it out.

The final designer was Madison Aeri. Her collection was reminiscent of a fairytale. Models were draped in dreamy florals, soft rosy hues and statement crowns. When asked what words she would use to describe her collection Aeri said, “ethereal, goddess, enchanted, magical.” Reflecting back she says, “I’m really grateful for everything Palomar has taught me.” She has big dreams ahead. “ I plan on starting my own business to help kids with disabilities,” Aeri said.. Tears well up in her eyes as speaks about these dreams coming to life and she sees herself one day sewing couture in Paris.

The evening ended in roaring applause and outside the tent, proud, overcome designers were met with flowers, praise, and tight hugs from their biggest supporters.