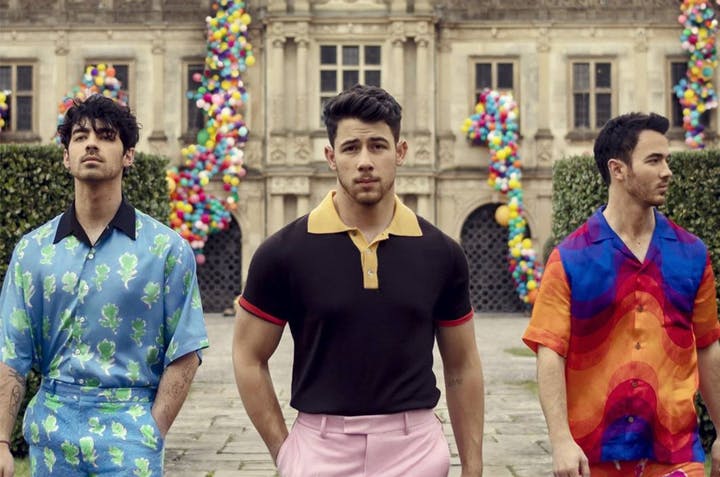 Jonas Brothers burning it up again

After six years apart, 3 Nick Jonas solo albums, 2 Jonas daughters and one DNCE album later the Jonas Brothers are finally back together.

It has been over a month since the trio announced their return with their new single “Sucker”. The band has proved to be popular for many generations bringing back joy to those who idolized them in their Disney days to the teens discovering them for the first time.

The trio was originally discovered through Nick, the youngest brother, who was overheard singing in a barbershop that lead to a record deal. “ Please Be Mine” was the first record put out by the band that earned them a group record deal with Columbia Records and on Feb. 27, 2005 the band released “Mandy”.

They also toured with a variety of artists including Kelly Clarckson and Jesse McCartney. The release of their first album, It’s About Time, was originally set to be released early 2006 put got pushed back due to changing executives at the label.

A music video for the Jonas Brothers single “Year 3000” was released on Disney Channel that skyrocketed the band while they simultaneously were getting dropped from Columbia Records. After a short time without a label the brothers were picked up by Hollywood Records in Feb. 2007.

Aug. 7 of the same year their self titled album dropped with featuring two successful sings, “Hold On” and “S.O.S”. The album peaked at number five on Billboard’s Top 200 chart in its first week. The Jonas Brothers continued to grow in popularity appearing on hit tv shows such as “Hannah Montana” and performing at the Macy’s Thanksgiving Day Parade.

In 2008 they released their third studio album A Little Bit Longer on August 12, just over a year after their second album. It peaked at number one on the Billboard Top 200 chart.

In June of 2009 the brothers released their fourth album entitled Lines, Vines, and Trying Times that debut at number one on the Billboard 200 chart.

In an interview with The Rolling Stones the band said “Lines are something that someone feeds you, vines are the things that get in the way, and trying times, well, that’s obvious.”

They also told Billboard, “We’re trying to learn as much as we can, continuing to grow.”

After a series of live performances the Jonas announced their separation Oct. 29, 2013.

After years of pleas from fans for the brothers to get back together the band released Sucker.

Co written with Ryan Tedder and Frank Dukes, Sucker debut at number one on the Billboard Hot 100 and US Hot Digital Charts selling 88 thousand copies in the first week. The song has a catchy beat that has a vibrant music video to match it that star Danielle Jonas, Priyanka Chopra-Jonas and Sophie Turner, the significant others of the brothers.

Their reunitement comes on the heels of the announcement of a Jonas Brothers Amazon Documentary where they explained that they did a lot of healing and reconnecting working through the problems that drove them apart.

There hasn’t been a release date set for the documentary but it is just one more thing along with an abundance of new music Jonas Brothers fans have to look forward to.