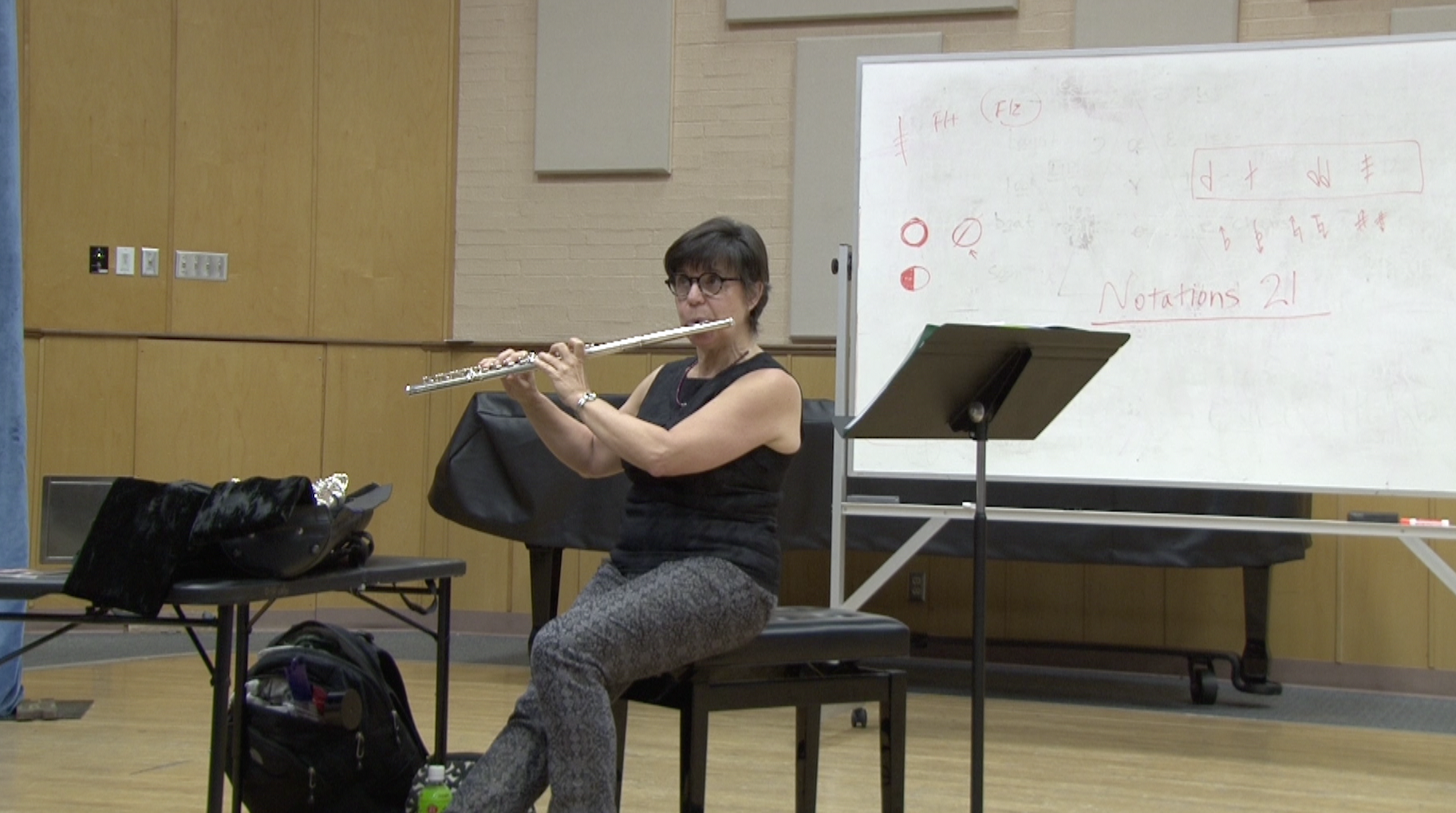 After a performance at Palomar colleges concert hour, Palomar’s Music and Jazz students were treated by Ellen Burr to a rare master class on extended flute techniques, and improvisation on and off the stage. Burr is not only a Master Flutist, teacher, conductor and author, she is a featured performer at numerous Los Angeles music festivals and concert series. She is also a member The West Coast Chamber Jazz Trio.

Burr gave down to earth tips on how to add color to your music and your life. Burr was creative both in her instruction and on her creative process. She was somehow able to make the tedious process of learning the techniques and the structure of musical composition fun.

Along with sharing ways to play incredibly intricate improvisational sounds and notes she also suggested striking a balance between finding your voice and supporting yourself. “Improvising, isn’t that part of socializing yourself? And part of being in the world is, how much do you say your own thing? And how much do you not?” Burr said.

A handout from Burr detailed some of the terms, techniques and notation for some of the sounds such as tongue stops, key clicks, Trills and Multi-phonics.” Any kind of sound you can make with your mouth, you can put a flute on the end of it,” joked Burr. The master flutist was able to conjure up an amazing vocabulary of sounds from the different flutes.

One student asked for advice on composing sounds for a musical arrangement about coral reefs. Burr playfully described how to mimic different animals. “Maybe you want some seagulls?” said Burr as she created the high pitched whale calls from the depths mixed with bird noises and breathy clicks and groans. “I like scaring children’” Burr joked as the class chuckled at the strange variety of sound effects from one instrument.

When asked how to create a multi-phonic sound, Burr described a technique of aiming the air from her lips at the edge, splitting it and the front wall of the flute. She compared it to making a sharp angle shot on the pool table. It allows the full tube to vibrate creating an oscillation between the octaves.

But all joking aside Burr discussed how only by a thorough knowledge and practice of the foundational elements of a song could she venture out into variations and interpretations of the notation of a song.

Burr also stressed the value experimenting and going off script after you complete a lesson. “I love it when I make mistakes while giving a class. Because that’s the thing about improvising.” Burr described practicing a section of a song in different keys, bending notes or only playing the high notes of a scale. “I would go all the way up and get that into my ear and my fingers. Then when I am on stage, then I just let myself… go … and I trust that from what I practiced something will stick’” said Burr.

Burr explained how mastering unusual scales like the pentatonic or chromatic gave more variety to her musical palette. Her explanation also relates to the open ended nature of improvisation. “If we play major scales, we are so conditioned to how it resolves, but with whole tones wherever I land will be home,“ Burr said.

To read and write the symbols for such strange sounds such as whale calls or jet whistles can be difficult. Palomar Music Professor and Composer Madelyn Byrne urged creative methods on how to write the correct pitch and timbre. “Don’t let not knowing how to notate hamper your imagination,” said Byrne.” For monster sounds or different timbres, just make up a description in text or a funky drawing. We can look it up after the fact,” said Byrne.

Burr’s lessons of hard work and having a sense of humor have helped her find her voice. In some ways music is like life; when you let go, you find harmony. “Our world makes you think too much, but you got to practice thinking, then you separate, and just let yourself trust that you are enough” Burr said.