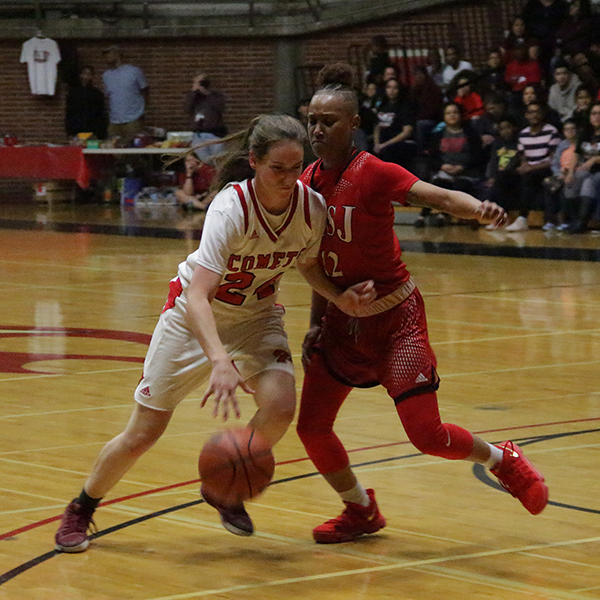 After a banner season the lady Comets basketball team came up just two games short of the state title.

A tough loss ends Palomar Women’s 11-game winning streak and playoff run in the CCCCA ( California Community College Commission on Athletics) tournament quarterfinals at Ventura College. The Comets were the No. 1 seed of the Elite 8 Teams in the state.

“We beat them in rebounding but at the free throw line we shot 55 percent but we lost the turnover battle and we lost the free-throw battle so you’re not going to win a game losing those battles,” said Head Coach Leigh Marshall.

Palomar was at one time down by 12 but rallied back in the last few minutes. “We did cut it at the end, we were up one and then we gave up an ‘and 1’ basket at the end.

Merced seeded 4th scored a huge win over the Comets and advanced to the title game only to lose to Mt. San Jacinto.

Despite the loss Palomar’s Women’s Basketball has established itself as one of the top programs the state. Monica Todd earned 1st team, all-state and the Comets were top five In nine categories, including points and offensive rebounds. Vinessa Perryman earned 2nd team, all-state and Megan Scott earned a spot on the Academic all-state team.

“They have done a good job in the classroom and that’s really important and I’m proud of them for doing that with the year that we had,” Marshall said.

Palomar;s players finished an incredible 29-2 — their only losses to Merced and to Mt. San Jacinto who won the state finals.

“It was definitely a great season, hopefully what they’ll remember is the memories they created with each other throughout the year,” added Marshall.

Clarissa Tate, who had 12 points in the final game, is one of six returning as sophomores along with five red shirts next year.

Pointing to the future Marshall said, “I’m excited for the whole freshman class and I look forward to building and getting better.”