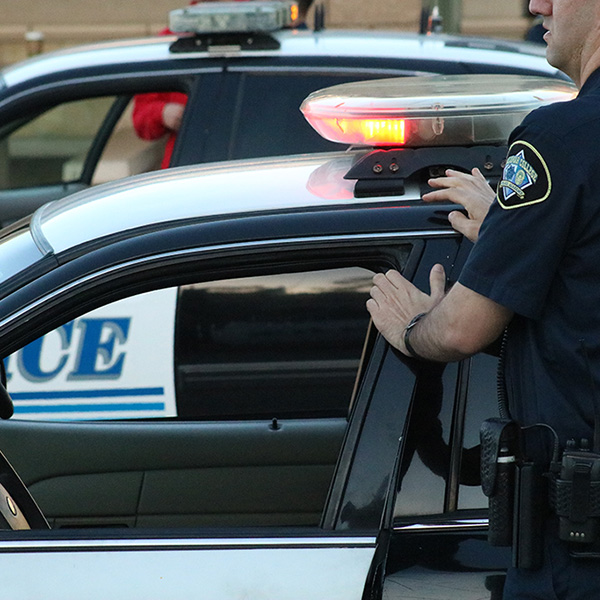 From routine side of the road pullovers, to critical 911 calls that alert the authorities to a robbery or shooting, this is where law enforcement begins.

Located at 182 Santar Place, the police academy hosts one of Palomar’s most intense programs. Much like the cadets in the fire academy next door, students attempting to become peace officers and enroll in Palomar’s program need to go through an application process, where just around half of the applicants are accepted. Those who are accepted go through a rigorous training process that tests the recruits’ mental, physical and psychological limits.

“Those that are interested in [law enforcement] this is definitely the academy to go to,” academy recruit Nicholas Flores said. “It offers top notch training and it pushes you to your limits to bring out the best in you … It’s one reason I chose to come here, because I want to be trained by the best, with the best.”

The program for the police academy can be completed start to finish in a full calendar year, and is broken down into three parts, Module’s three, two and one, in that order. To be accepted into the academy, students must turn in a neatly and thoroughly completed application packet. Upon successfully doing so, applicants will be invited onsite to do a physical agility test, complete an oral interview, and starting next year the academy plans to add a written test to the process.

A brand new recruit will start Module III the first Tuesday of January, and ends after 9 weeks at the beginning of March. Graduates of module III are qualified to be reserve police officers, but not in any position which may involve making physical arrests and must be accompanied by a supervising full-time police officer.

Module II begins with the next class meetings and takes 16 weeks to complete, graduates of Module II are permitted to do the same task work that reserve officers are permitted to do after completing module III, but can now do them without supervision, they are also allowed in the field while accompanied by a full time officer.

Module I begins the class meeting after module II, and runs for the remaining 25 weeks of the year. These graduates are qualified to be hired as full time police officers anywhere in the state of California.

The Call to Law Enforcement

Many of the recruits going into the academy joined for the community serving aspect of the job. “I’ve been looking at joining the reserves for many years,” academy recruit John Andrews said. “[To have] a chance to give back to the community and be more involved.”

Before joining the academy Andrews had been working in the software development industry for around 25 years, he is currently in between jobs after the company he last worked at went through acquisitions. He took it as an opportunity to act upon his desire of joining the reserves, knowing that the academy is labor intensive and would require much of his time.

Another recruit, Nick Herington came to the academy after working for a few years in sales. He got into sales after graduating from high school, but mentioned that even though he was making decent money, he didn’t feel as if though it really mattered in the grand scheme of things.

“I wanted something that made a difference to somebody else and gave me .. sort of a sense of worth,” Herington said. Once he has graduated, Herington plans to stay in California for a few years, but then wants to transfer to a police station out of state with his fiance.

The trainings that recruits must go through to be prepared for the job are required to change and adapt to the social atmosphere. “The culture right now, it’s pretty anti cop,” academy recruit Chalie Park said.

In recent years, an increasing number of citizens, especially minorities, when they see law enforcement, get more a sense of anxiety than security. In a survey conducted at the beginning of last year, Pew Research Center found that 60 percent of the general public see police related deaths of African-Americans in recent years as a sign of a broad issue with law enforcement, than as isolated incidents.

Park mentioned that one thing he is looking forward to doing when he joins the police force is figuring out how to help change the public’s perception of law enforcement.

“That’s a part of dealing with conflict,” Barnes said. She cited that among the reasons for the shift in public opinion of law enforcement is media spotlight being on specific instances that paint a bad picture for law enforcement, that doesn’t reflect how the police community at large behaves.

“You treat everybody as if it were one of your relatives,” Mark DiMaggio, Academy Director and former Palomar Police Chief said about how they teach their recruits to interact with the community. “Once you start instilling that in their head, that you have to be professional and do this with great dignity and respect, it starts to instill in their head that’s how everybody needs to be treated. And that’s the best methodology of doing this job.”

For those interested in joining Palomar’s police academy, the application for next year’s academy will be available in May, and the academy will begin accepting applications for Module III in June. There is currently a high demand for police officers in the job market, so Barnes and DiMaggio are always looking for more recruits. For more information on the police academy, you can visit their website: https://www2.palomar.edu/pages/policeacademy/