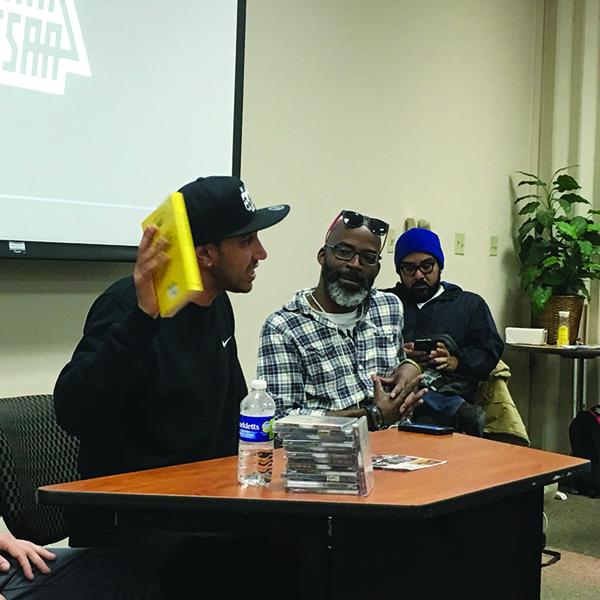 On the 4th floor of the SDSU Love Library, students of music, language and culture hear the confession of Italian hip hop pioneer Amir Issaa. The event slated as “Power to the People: A cross cultural hip-hop discussion and workshop also featured local rapper Parker Edison.

Put on by SDSU’s European studies Department, it was attended by students studying a variety of majors.

The discussion flowed from the evolution and globalization of hip-hop to Issaa’s experiences of poverty and discrimination in Italy.

He spoke of how his outreach efforts strive to educate and empower the youth to open up, get engaged and use their voice and build connections. “Try to tell your life with rhymes and this is revolutionary music because without instruments, without money, without nothing, only your voice, your mind, a pen and a piece of paper.”

Issaa explains how music cuts through issues that are hard to express by teachers or hard to digest by students. ‘More then any genre hip-hop discusses the needs of the new generation.” Perhaps its rap music’s directness or homemade appeal that allows Issaa’s students to use their words. “If a professor asks a student to talk about discrimination he will get a different answer then if a rapper asks him about it. Today’s youths want to take part in society but don’t have the chance or the tools to do so.”

To teach kids the tools Issaa hosts workshops at schools, colleges, and juvenile penitentiaries and travels abroad collaborating with the Italian Cultural Institute and creating more than a hundred music labs in public schools.

Issaa’s success may be attributed to the fact that his message of honesty and positivity cuts through much of the lies and pretense that fuels the divisions in this world. “I think its important that he incorporates his life experience into his music, if you keep it real, they’ll see the impact and people can relate to it because a lot of them share the struggles that he’s gone through” said Monica Carillo, an SDSU freshman.

Issaa was born from an Egyptian father that emigrated to Italy and a native Italian mother. Growing up poor and with his father in jail from a young age helped mold Amir’s humility and also his passion to improve.

“Because I have my father in jail and its more easy for me to push drugs or make a criminal life, its more easy. But I chose the other way, it’s the hard way but now at 39 years I create myself a future, a work, a legal work. I don’t want problems with the police. I want to live in chill and maybe try to change the society. I’m a little brick in this big building,” said Issaa

Rather then retreat into the darkness of what was missing from his life Issaa studied the shrouded bits of sunshine that slowly filtered into his life in the form of hip hop from America. “As soon as I heard RUN-DMC it opened my world” said Issaa. The story of Issaa is similar to the story of hip-hop both were unpopular initially and had to struggle for survival and recognition.

Growing up in the eighties Amir identified with the urban struggles and stories he heard coming from hip hop songs originating from the poor American neighborhoods of The Bronx and Brooklyn.

The hip-hop of the late eighties and early 90’s also created a social movement Artists like Public Enemy and KRS-ONE addressed deep topics like social justice and drug addiction. Issaa’s awareness and content oriented lyrics have done well for his longevity , but his unique perspective and influences gave given his voice more relevance with recent issues of immigration and nationalism.

Issaa being a second generation Italian has been faced with discrimination and criticism for his lineage and for adapting hip hop into Italian culture. All this while seeing the influx of immigrants born in Italy yet denied citizenship due to their parents not being native-born Italians.

Professor Roy Whittaker of the religious studies Dept. at SDSU teaches a class at SDSU called Hip-hop and religion weighed in on some of the issues facing our society. He mentioned the words “the diaspora ( which means expulsion and migration) and relating to anything from refugees to Hip Hop it challenges the definition and notion of identities since they are always part and parcel of other cultures when put in context”. And relating to hip hop how it started in New York and spread to the west coast and now to different places. So People are making it their own wherever they go”.

Much like Jazz, Rock and roll and Salsa were spawned from a mixture of genres only to regenerate years or decades later in unfamiliar places new native sounds with an older cultural rhythm creating a unique musical identity whether out of necessity or chance. Hip hop has migrated across the world to Africa, Europe, Korea much the way refugees are flooding Europe and reforming itself out of necessity. Afro Trap and K-pop are examples that show it survives and unites people with music.

Issaa who grew up influenced by the sights and sounds of two drastically diverse cultures has created an identity completely foreign to his environment. He also has become a spokesperson for other second generation kids born in Italy fighting to be granted citizenship He joined with Change.org submitting petitions and spreading awareness through his music of the “Jus Soli” movement (right of the soil) to promote the plight of these “new Italians”.

“Its not just one of those artists that only speak about drugs or girls or his criminal life,” stated Barrios, adding “its not just music but lyrics, they inspire you, they tell you a story.”