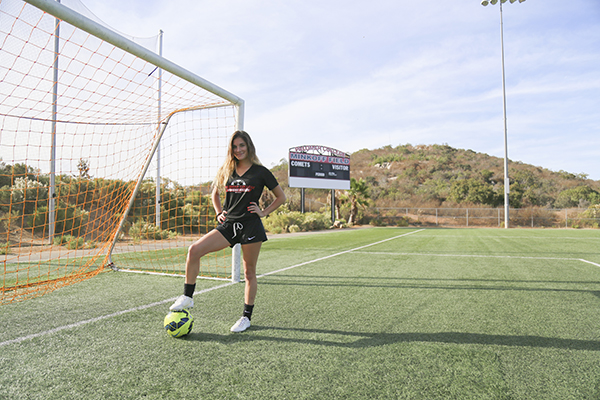 The women’s soccer team might not have reached its goals this season, but Samantha Kaye-Toral leaves her team with feelings of hope for what could happen next season.

Kaye-Toral is from Murrieta, where she attended Murrieta Mesa High School. Now she is playing as Palomar’s center midfield, a key position for the team where she orchestrates attacks and helps defend.

Although a freshman on the team, Kaye-Toral has become a key player for Palomar’s soccer team this fall.

When a string of injuries took out big players early in the season, head coach Hector Hernandez looked to see who could lead the team. Kaye-Toral stepped up and has set the tempo of the team all season.

“She is the heart and soul of our team…When we needed a spark, she gave it to us,” Coach Hernandez said.

Kaye-Toral has been playing soccer since she was 4 years old and has dedicated her time to soccer only, not playing any other sports on campus.

“I have loved soccer ever since I have set foot on a soccer field. It truly is my drive, motivation, and passion. I get goosebumps just thinking about soccer,” Kaye-Toral said.

Her childhood friend Madi Dickinson stated, “She is the sweetest girl ever and is an extremely hard worker on and off the field.”

When head coach Hernandez was asked about his initial thoughts of Kaye-Toral he stated, “My first impression of Samantha was that she had great foot skills. She had nice touched on the ball, made some great movement off the ball, and struck the ball well. I actually saw her as a forward, but she turned up being a terrific center midfielder.”

Not only a natural athlete, Kaye-Toral has shown the composure of a true professional.

“Samantha is a great example of sportsmanship. Win or lose, she always acts the same way. When she gets knocked down, and she did a lot, she would just get up and keep on playing. She never said a negative thing to anyone, and she always complimented the opponents after a game,” Hernandez said.

Her teammate and team captain Yulithsa Chamu follows with, “Even though she is tiny she is a feisty player and is not scared to take anyone down.”

Though not a captain, Kaye-Toral has asserted herself all season as a silent leader of the team, controlling the midfield and creating excellent passing with the teammates around her.

“She leads by example. She does not shout out directions or demands a hard effort. However everyone recognizes Samantha’s effort and in return they push themselves to their full potential,” Hernandez said.

Kaye-Toral will return next season, and coach Hernandez mentioned, “We have unfinished business.”

After Palomar, Kaye-Toral hopes to get a soccer scholarship from a university and become a professional player.

“I’m willing to do whatever it takes,” she said about her dreams.

Kaye-Toral’s accomplishments this season include a team MVP, four goals, including a game winner, and five assists in 17 games. Her impressive haul helped the Comets to an 8-9-4 record and a second place finish in the PCAC North Division.

“I can’t thank my teammates and coach enough for always pushing me this season, they are my family,” Kaye-Toral said.