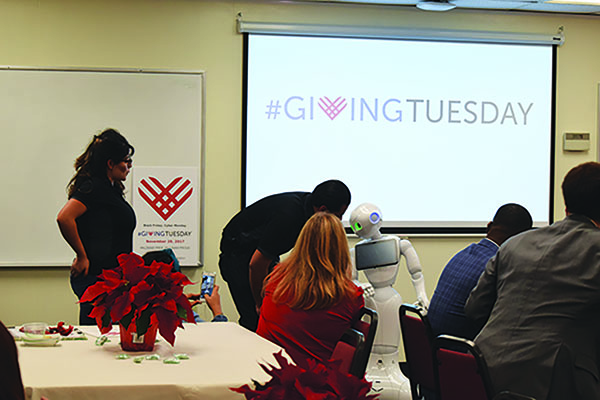 The Palomar community continued their promise to supplement the cost of student success with their latest fundraising event “Giving Tuesday.”

Held on Nov. 28, the annual event was designed to raise funds for student textbooks, scholarships, and the Palomar Promise. An anonymous donor pledged to match every donation on the dollar, meaning that for every dollar that was donated, another was given.

Giving Tuesday has grown out of a nationwide initiative to raise money for charities on the Tuesday following Thanksgiving. Originally organized as the brain child of the “92nd St Y”, a community center in New York City, and the United Nations Foundation in 2012. Since then, Giving Tuesday has gone global.

Giving Tuesday is a response to the yearly engagement in heavy consumption and consumerism on Thanksgiving, Black Friday, and the newer Cyber Monday. It is an effort to “support and celebrate giving,” as described from the organization’s website.

The Foundation recognized this need to give back. In the midst of financial insecurity and the rising cost of living, the Foundation exists to serve students by offering resources, such as those included in the Palomar Promise.

The Palomar Promise, a financial aid effort run by the Foundation, textbook assistance, specialized counseling, and even free enrollment to those who qualify.

Some students, however, feel that the foundation is failing. “I feel that no amount of charity can ever fulfill the needs of lower class and working class people. And that it’s just a tourniquet for the many problems in education, funding, and who gets what, and education being priced as a luxury instead of a necessity,” Palomar student Matt Vigil said.

The event included refreshments, fundraising, and a performance by Pepper, Palomar College’s AI robot, who spoke about donations and then began to dance.

Stacy Rungaitis, the Foundation Executive Director, “The best part of organizing an event like Giving Tuesday is talking to and hearing from our generous donors. The Foundation is so fortunate to partner with the most generous individuals and corporations in our community.” Added Rungaitis: “For anyone who believes in the power of education, Giving Tuesday, and the holiday season in general is a wonderful time of year to think about others and their needs.”