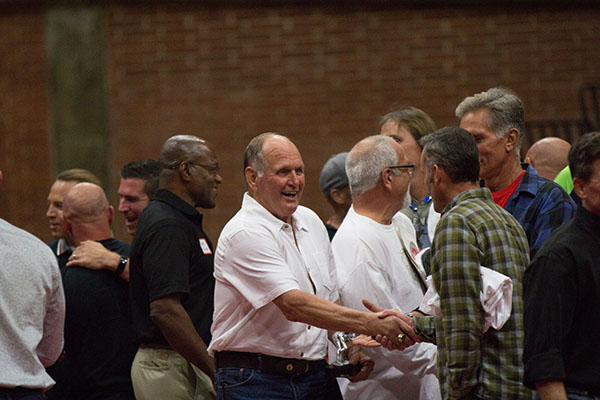 Wrestlers and coaches from Palomar’s past and present gathered together to celebrate a Hall of Fame coach and athletic director, at 7 p.m. on Oct. 11 at the Palomar Dome.

Alumni wrestlers, including Hall of Fame wrestlers Aaron Gaeir and Joe Ismay, honored former coach and athletic director John Woods, who was inducted into the Palomar Athletics Hall of Fame in 2016. For this occasion, Palomar wrestling alumni were invited back to celebrate and watch the current Palomar wrestlers take on Rio Hondo College.

Alumni wrestler from the 1970s, Frank Barnhart, was one attendee and was involved in both the wrestling and football programs while attending Palomar. He later completed his bachelor’s degree in physical education with a minor in history at California Polytechnic State University (Cal Poly). Later, Barnhart returned to Palomar and was Woods’s assistant coach for three years.

Barnhart was happy to attend the reunion and see all the boys getting back together. He stated, “It’s good to know that all these part-timers are getting together.”

Palomar Hall of Fame wrestler and former coach, Joe Ismay, was in attendance as well. He began his wrestling career in high school, then went on to Palomar. He later received a full scholarship and wrestled at California State University, Fresno. Now, after completing 20 years of coaching at Palomar in 2005, Ismay is coaching wrestling at a local middle school.

“It’s fantastic, I had a great experience here at Palomar. I feel like it set the course for my life. And, I have a lot of history with a lot of the guys here…Rich history here at Palomar and it’s just great to see all these guys come back and enjoy the team,” Ismay said.

The highlight of the evening, was surprising John Woods with a trophy to in honor of his induction into the Hall of Fame. Woods coached wrestling at Palomar from 1973 to 1988, and later became the athletic director at Palomar from 1986 to 2007.

Woods was a four-time state coach winner. His wrestling teams achieved 51 All-Americans, won four state team titles, and three dual-meet championships. Many people were impacted by Woods. To some he was a father figure and to others a friend.

Alumni wrestler, Mark Harrington, who attended Palomar from 1984-1986, commented on Woods being placed into the Athletic Hall of Fame.

“Oh, he deserves it. He is one heck of a coach. In 1985 we won the state championships. He deserves everything that is coming his way,” Harrington said.

When asked how it felt to know that so many people came from all over, one of the alumni flying in from Washington state, in celebration of the award, Woods said: “You’re not anything without someone else, I have said this many times, anything I have ever accomplished was on the shoulders of somebody else… I was the coach, but they were the team.”

Published in Home and Sports