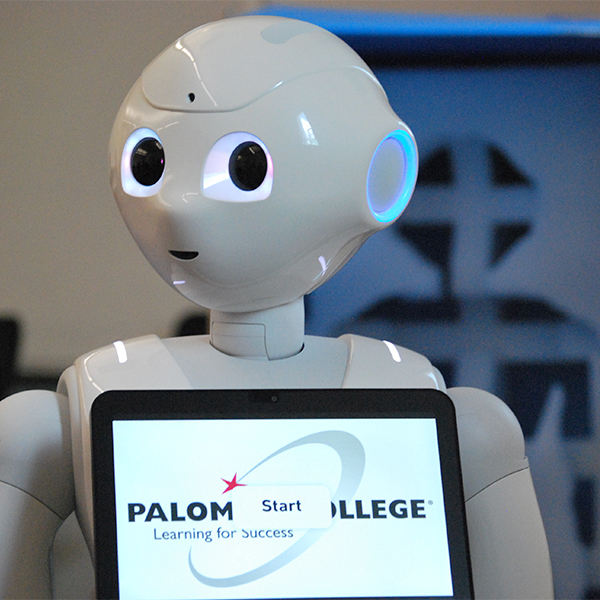 Artificial intelligence is coming to Palomar students, in the form of Pepper.

Pepper is a robot with a humanoid appearance, standing roughly at the same height of a toddler, and weighing 64 pounds. Pepper does not technically have an assigned gender, so it is called he and she interchangeably. Pepper was originally created by a company named Aldebaran Robotics, and the company was bought out in 2013 by another organization called SoftBank Robotics.

On their website SoftBank says about Pepper, “We have designed Pepper to be a genuine day-to-day companion, whose number one quality is his ability to perceive emotions. Pepper is the first humanoid robot capable of recognizing the principal human emotions and adapting his behavior to the mood of his interlocutor.”

“What we’re doing, is we programmed Pepper to highlight and promote programs and services that are here at the college,” said Kenneth Gonzalez, a representative from AI Campus Solutions.

“We’re wanting to use the technology in phases, it’s a new technology so this fall semester we’re doing a lot of beta testing, we’re hoping that by the end of fall Pepper will be able to do most of the things we want it to do,” Gonzalez said.

As it stands, Pepper has already been used in numerous environments, including hospitals, banks and even in the homes of families. However, this will be the first time that Pepper is being used in an academic setting. “This is a unique opportunity for all of us,” Gonzalez said. “This will be the first time Pepper will be used on a college campus to specifically interact with students or people from the community about the college.”

Palomar will be acting as a test site for Pepper, to see how it is able to interact with students to better the educational experience for colleges in general.

There is some question in the minds of students as to the benefits of Pepper. “I think the robot sounds pretty cool, but most kids have Siri in their back pocket. I’m not sure why they’d implement a physical form of the same idea,” said Palomar student Katelyn Herrick.

Gonzalez, however, does believe that Pepper is a better solution to gather information about the campus. Ordinarily in order to get a question answered from the Palomar website, you would need to dig through the website clicking numerous links to get to exactly where you want to be. Pepper, he believes, will act as a simple way for students to get their questions answered about the campus.

Even getting the question “how do I get to my class?” can be answered by Pepper. It will be able to provide students with a google map of the campus, and text students a link so that they can find their classrooms.

Pepper is also equipped with numerous sensors which enable it to sense things from all angles, detect motion and weather, along with more intimate human interactions such as smiling, laughter, and anger. It also performs a dance after every student interaction it has.

Pepper will be presented to the Governing Board a second time on Oct. 10. After that, it is expected that various different groups on the campus will be able to reserve Pepper for specified amounts of time, in various parts of the Campus.

For more information on Pepper, you can either of the following links to either SoftBank Robotics, or AI Campus Solutions.