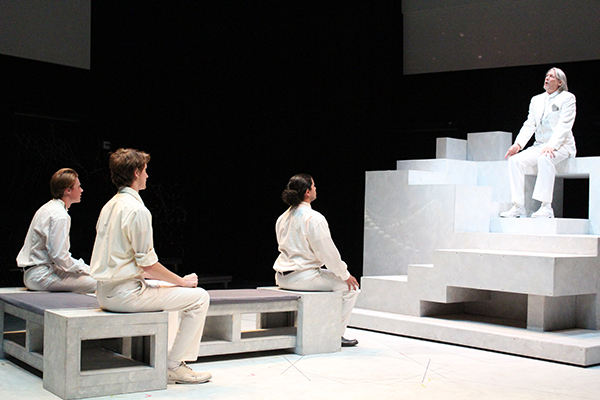 Palomar’s young thespians stagger amongst one another in a blacked out theater before the premiere of this season’s opening play.

Michael Mufson, director at Palomar College, stood with an heir of authority and spoke with affection. The time was just shortly after expected and close to the beginning of practice. The young thespians were gathered around an odd structure–it looked like if contemporary art and a staircase were stitched together–they were all anxious and looking at each other expectantly; ready for the trials that lay ahead.

For those that are unfamiliar with the title “Brave New World” as a play, it is based on the book of the same name by the author Aldous Huxley and this years headliner. The plot centers on a futuristic society that consists of brainwashing and drugs that produce happiness. The story’s follows an imperfect man finding his way in this off beat reality of what was a normal society.

There’s a lot of excitement about the content in part because of its rarity, Mufson had some trouble in locating an actual script. He said that there Is only two other adaptions of the book onto a stage performance, one at a professional scale in London and another at a high school – which is the script he used along with actual dialogue dissected from the book.

Matthew Whetstone, who plays sub-bursar, had a copy of the literature with him during rehearsal. He said the play is to feature some pretty surprising moments that is sure to get some interesting reactions out of the crowd. The book itself would have quite a shock value if it was done exactly as is as it contains often racist remarks and other explicit content.

The show will take place the Studio Theatre which on account of its structure creates the feeling that one is a part of the action. Once inside the isolation felt from this should really make it seem like it is just the actors and viewer inside.

In a room separate from Mufsons earlier motivation, the ensemble cast continued to warm up. Many were tired, a little reluctant for the efforts that laid ahead, but there was no shortage of humor and playfulness going around as each gathered in anticipation of a practice that would no doubt go later into the night.

In this futuristic drama, society is not reluctantly controlled. In fact the opposite is true, control is done through pleasure and happiness; an illusionary happiness combined through engineered intelligence Mufson said of the play. What he Implies is for the viewer to look at our own lives in comparison to this offset reality. The decision for the play is not accidental and the ideas of its relevancy, an all too familiar force fed population that could be relevant today.

Gabriel Nelson, who plays arch community songster, walked around trying to rally many of the costars to get into character. Nelson will also be singing in the performance, his involvement with the plays score was an obvious necessity notable from when he first walked in guitar over the shoulder.

The play will hit the stage from October 5-8 in Studio Theatre at varying times. Tickets start at $10. For more information on this years performances visit www.palomarperforms.com