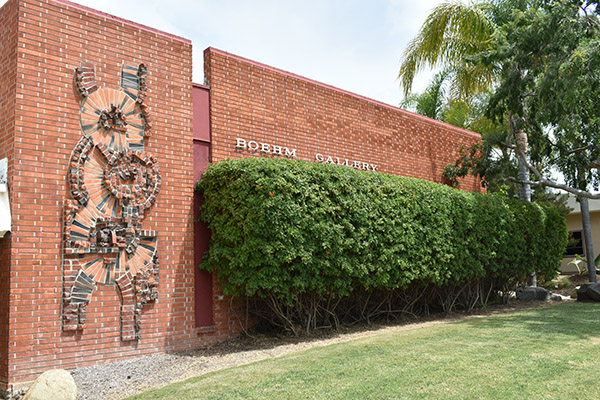 A salon showing at gallery’s exhibition

Palomar’s art gallery will use a 1700’s style of art exhibition to showcase more than 20 artists’ personal art collections that will fill the gallery walls from top to bottom.

The Boehm Gallery will showcase its second exhibition, “The Maker’s Eye,” of the semester from Oct. 5 to Nov. 1. Gallery director Sasha Jonestein looked to artists from Southern California and adjacent areas to showcase 2-3 pieces from their own personal collections, putting the curation of the show in their hands. The work will be presented in clusters amongst the gallery walls and floor space reminiscent of French salons of the 18th Century.

Claudia Cano, a former exhibitioner at the gallery in 2011, will provide three small works for the show: a small bronze sculpture from her time in Mexico City, a piece of jewelry from fellow exhibitioner Marianela De La Hoz and a family heirloom from her late grandfather.

Cano started collecting art nearly 15 years ago, bringing with her a small collection she had acquired from her life in Mexico. There she would sell her art pieces, photographic works, in the markets of Mexico City where she acquired a bronze sculpture of a woman kneeling symbolizing fertility. In exchange for the sculpture Cano took photographs for the artists, interactions that happen often between artists.

Nikko Mueller, who will also be exhibiting a single work for the show, has a similar story where he began collecting work in trades with other artists in graduate school. However, the work he will be showcasing was a gift to him and his wife from a studio mate in Inglewood.

Kristin Calabrese’s “Don’t Be Afraid,” was first showcased in an exhibition at Susanne Vielmetter Gallery in Los Angeles and was given to Mueller as he left the Los Angeles area. The 69-by-9 inch oil painting depicts a hyper realistic broom.

“It was her height and her smallest width if she pulled her chest in and everything into this tiny space,” Mueller said. “I think a part of that was to be as small as possible.”

The exceptionally thin painting was taken as a nod to his wife’s neat-nick tendencies and his sloppy habits and was a piece he could never afford from the gallery that it had shown in or even in auction, Mueller said.

“I think she was sort of making fun of things when she gave me this beautiful painting of a broom,” Mueller said. “It’s one of my prize pieces.”

Art pieces that have a narrative from artists collections likethat of Mueller are what Jonestein is bringing an eye to in this exhibit. The inspiration she surmised was from the contrasting motivations that artists have when collecting art versus those of the general public, either from trades or personal relationships.

Cano’s heirloom is the only object she has from her grandfather who was a sculptor of religious figures. The work she’s showcasing is a mold her grandfather would use to make angel faces and was handed down to her from her late uncle who passed away two years ago.

“Having that piece of artwork that belong to my grandfather is the connection I have with him and I treasure it a lot and I am so afraid that someone is going to bump into it and break it,” Cano said. “I hope it doesn’t happen but it’s the only object I have from my grandfather.”

In a way, the mold is a link to her history and why she became an artist by witnessingthese sculptures from her grandfathers mold in the churches she attended growing up.

While the collection showcases artists’ collected work it’s also meant for those in the Palomar community to examine their own surroundings and how they affect their everyday, Jonestein said.

“Me as an artist having something so close to them is like having something from them,” Cano said. “It’s not only the artwork it’s the essence of the artist which I’m carrying on in my everyday life.”

Mueller said that when collecting work there’s always something in the piece that starts to stimulate his interaction with it that makes it exciting.

“It makes it something I want to be around and that I want to live with,” Mueller said. “If it doesn’t match the couch the couch can change.”