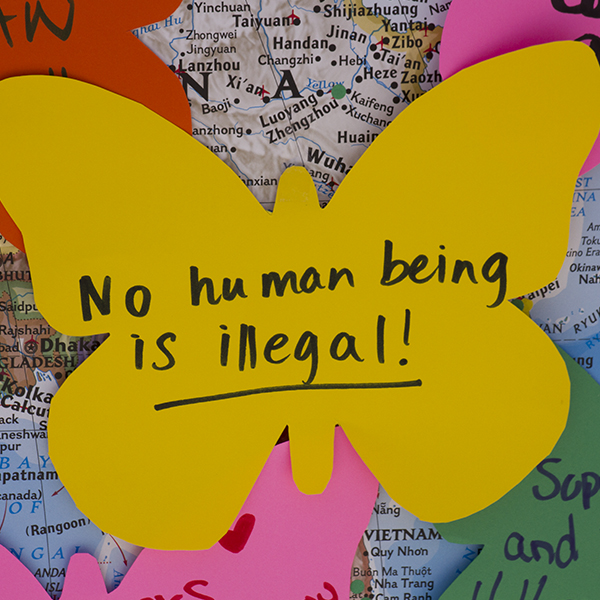 Chants of “Here to stay” and “Si, se puede” rang out through Palomar College as its community came out in support of all students at the college on the heels of the announcement of the termination of DACA (Deferred Action for Childhood Arrivals), a 2012 Obama immigration policy that defers deportation of undocumented immigrants’ children.

On Sept. 5, Attorney General, Jeff Sessions, announced that President Trump would pass the future of the country’s estimated 1.9 million eligible DACA recipients, according to 2016 data reported by the Migration Policy Institute (MPI), to congress with a decision to be announced within the next six months.

Frustrated by the lack of response from the Trump administration leading up to the Tuesday announcement, Palomar’s student run club SEED (Supporting Empowering Engaging Dreamers) made a last minute decision over the Labor Day weekend to stage a rally on Palomar’s main campus in the SU-Quad.

“Everybody is really scared right now, everybody is uncertain and we just wanted to show the students that we are here for them and we support them,” SEED vice president Fabiola Hernandez said.

More than a hundred people were in attendance at the event consisting of members from the faculty, administration and student body. Associated Student Government President Chris Hopp wasn’t sure how the event would turn out at such short notice with little marketing, but was happy to see that all levels of the campus were in attendance to stand and support all of Palomar’s students.

MPI reports that 560,000 eligible DACA recipients reside in California, of which 38,000 reside in San Diego County.

Nedy Velazquez, a DACA student at the University of California San Diego and Palomar alumnus, was in attendance at the event because she felt an urgent need to represent those students who are looking for a voice in finding a way to be a part of this country.

“(Palomar students) realize what the priorities are. Seeing that this was an event that was important, it was amazing to see such support,” Velazquez said.

DACA recipients have until Oct. 5 to renew their two-year status if up for review on or before March 31, 2018. Palomar students can find resources and information on Palomar’s website at palomar.edu/pages/ab540andimmigrantresources.

Vice president of Student Services Adrian Gonzales said that it’s important for the administration to let the students know that they support all of the students at Palomar, regardless of background.

“It’s important for you as the next generation are able to step up, follow through with what our forefathers brought to us and provide equality and access for all students,” Gonzales said.

A political world map was propped up during the rally for participants to write down messages in solidarity with Palomar’s DACA students on butterfly’s representing the migrational patterns of monarchs Hernandez explained. What was first presented as a bare map divided by nation boundaries at the start of the rally quickly became a demonstration of the lack of divide amongst Palomar students and faculty as the map was devoured by these butterfly’s with messages of hope and compassion before it’s end.

“We see these students as butterflies, as dreamers. We want to display these butterflies on campus for those passing by to read these messages as a symbolic gratitude for them being here,” Hernandez said.