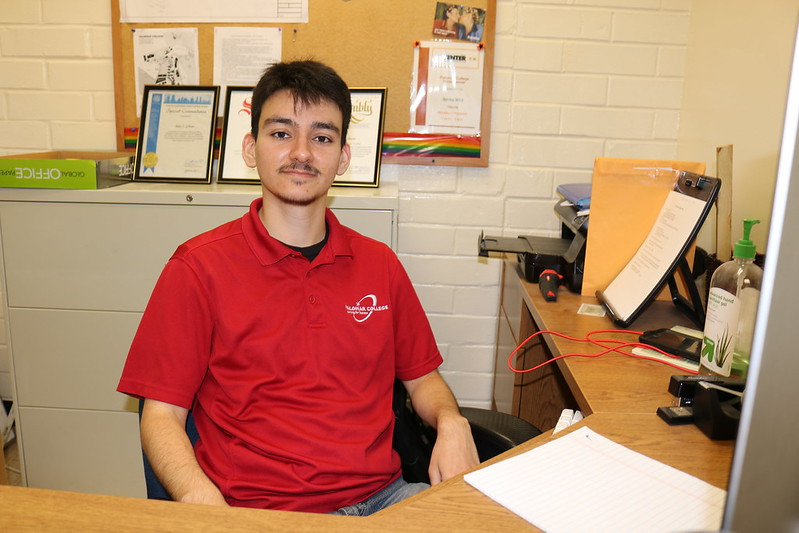 Riley Gibson is a 24-year-old Communications student at Palomar College, and the first transgender employee at the Pride Center after being hired on in early April.

“He’s doing fantastic. And it’s exciting to have our first trans employee in the center. He brings increased visibility to transgender issues which is really important,” said Pride Center Director Abbie Cory.

Growing up, Gibson was a tomboy. He wanted to play with toy trucks and be on the hockey team. But Gibson’s parents sensed something deeper might be happening within their child.

“They were very, very strict on what I was allowed to wear and who I was allowed to play around. They had to approve my friends, which was odd because they didn’t do that for my sister. I guess I wasn’t what they wanted,” Gibson said.

As he grew up he came to realize he was transgender, “It was something I was really ashamed of. I didn’t want to be a freak—I thought I was for the longest time. It was a process of learning to accept myself and accept that my feelings were ok,” Gibson said.

At nineteen years old he decided it was time to take an important and difficult step; tell his parents he was transgender, “They kicked me out when I told them.”

Gibson decided to make the best of an awful situation; he moved in with a friend and began transitioning. When his friend could no longer provide a place for him to stay, Gibson ran out of money and became homeless.

“Nobody would hire me because all my documents were inconsistent. It was scary, I did come from an upper middle class home, so going from that to being homeless was a big culture shock,” Gibson said.

While homeless, he struggled to receive financial aid, “I couldn’t get the FAFSA or other financial aid because of the fact that I’d become legally male, but hadn’t signed up for selective service.”

Gibson encountered more set-backs when trying to sign up. He never received clear information from the Selective Service Office, as they were uncomfortable with Gibson being trans. He went a year and a half without financial aid.

It isn’t just people at the Selective Service Office, “You’ll notice that some people, when you meet them, they’re really nice to you, they’re totally cool with you, but then when they find out that you’re trans they’re not as nice as they were,” Gibson said.

Even after five years, his relationship with his parents hasn’t changed, “I don’t speak to them. I haven’t seen them since they kicked me out.”

Things began looking up for Gibson when he finally received his student aid and began attending Palomar where he was hired as Palomar’s Pride Center Assistant, “PC3H which is the Palomar College Committee to Combat Hate was established so that students that were struggling or were like me, could find each other and build a community of people going through similar experiences.”

A study conducted by Americanprogress.org estimates that nearly 400,000 gay and transgender youth face homelessness each year. Gibson’s work and the presence of the Pride Center is essential in diminishing that number.

Mykel Deanda, a 19-year-old student who regularly visits the Pride Center said, “He’s really taken the role seriously and his constant effort for the pride center reflects on who he is as a person. It’s more than a job for him.”

Gibson said, “We have a ton of resources and information that we can provide: psychologists, clinics, and support groups. All sorts of things.”

It’s been a tough road, but now Gibson is the man he always was, and needed to be, “Despite losing my family which is still a big deal to me, and despite the fact that I had to be homeless for a while, my mental health has greatly improved. It makes a world of difference when you can finally feel at home in your own body. It was like a two-ton weight was lifted off my back and I could finally just feel normal.”

Gibson is happy to help anyone in need, “There’s definitely a lot of fiery hoops you have to jump through just to lead a normal life, but if you know the right people, they will help you fight through that.”