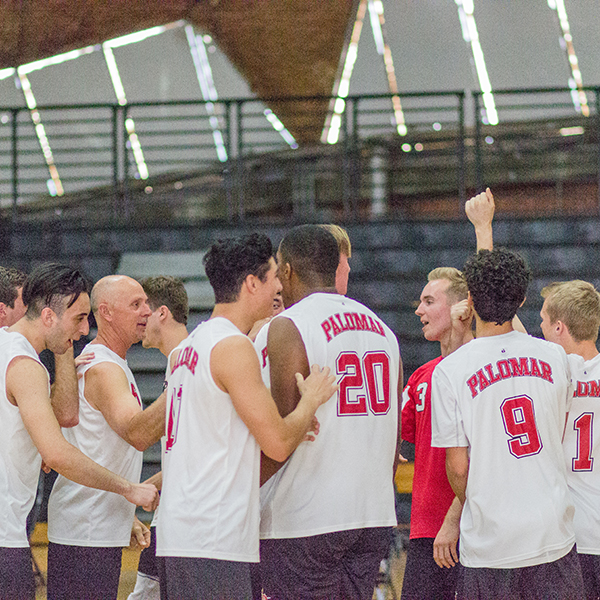 Men’s volleyball team has down year, but future is bright

The Palomar men’s volleyball team is optimistic to build off of their 2-16 record from the 2017 season.

For first year head Coach Bryan Campbell, a former volleyball player at Palomar, it was a season of trial and error.

“A lot of the guys bought in and everybody worked hard, so I really can’t complain,” Campbell said.

The season began in February with a 3-0 set loss at the hands of Long Beach College. Palomar would manage to defeat LA Trade Tech 3-0 and Santiago Canyon 3-1 for their two wins on the year.

Ultimately, Campbell and the team suffered from growing pains as they went winless for the rest of the season.The team finished 0-7 at home, 2-8 on the road and 0-1 in a neutral setting.

One positive the team took away from the season was unity. Members from the team have continued to work together even after the season. Quinn Burton, 20, believes there are good things on the horizon.

“Next season we’re going to be a lot better, a lot stronger, mentally and physically,” Burton said.

Ken Reyes, 21, is eager to be apart of the rebuilding process for the program.

The season might not have gone as planned, but the team has many players that will be returning for the 2018 season.

“Out of the nineteen that we had, we had three sophomores. So we have a lot of returning freshman,” Campbell said. “I expect them to come in leading the team and I think it’s going to be a good year for us and an opportunity to build our confidence.”

Campbell and his returning players will look to have a productive off-season as they continue to build for the future.