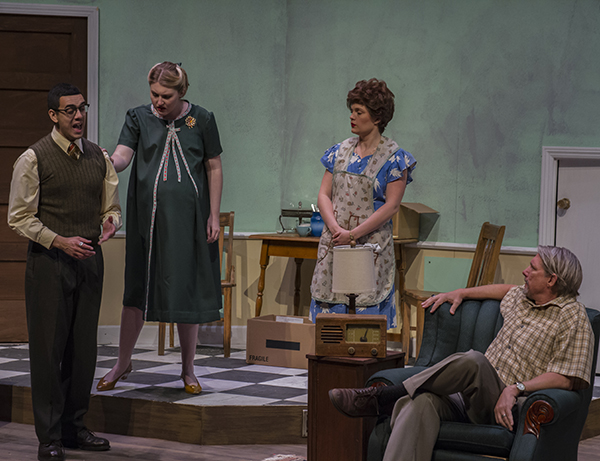 “Clybourne Park” reflects upon gentrification and how the American opinion of race has changed over the decades.

Palomar College’s Studio Theatre presents “Clybourne Park.” The satirical play is introduced in two acts in the course of 50 years. The generous space of a “Clybourne Park” home in Chicago suburbia welcomes act one.

In act one the audience is introduced to the main occupants of the “Clybourne Park” home. The walls are painted in a deco mint green color with humble furnishings. The audible acoustics bring life to the stage, in the warm and snug Palomar’s Studio Theatre, even with the loud pouring rain on opening night.

The entire first act is set in the living room where the conflict arises, when a couple plans to sell a home to an African-American married couple. Although the satire of this particular play is that the entire cast is surprisingly of mixed race and multi-cultural, the actors of the cast do a realistic portrayal of their race they are typecasted in.

Fast forward 50 years later, “Clybourne Park” is now home to a predominately black community. The irony in act two is that a white couple plans to buy the house. The house doesn’t look the same, torn wallpaper hangs from the walls, the wood floors are warped, covered in trash and resembles beached drift wood. The furnishings are in the same condition.

The cast is constantly interrupted by the ringing of cell phones. Eventually, disorder develops and the cast is thrown in another disagreement. What will become of the “Clybourne Park” home, but most importantly will they finally come to an agreement as to what’s for dinner?