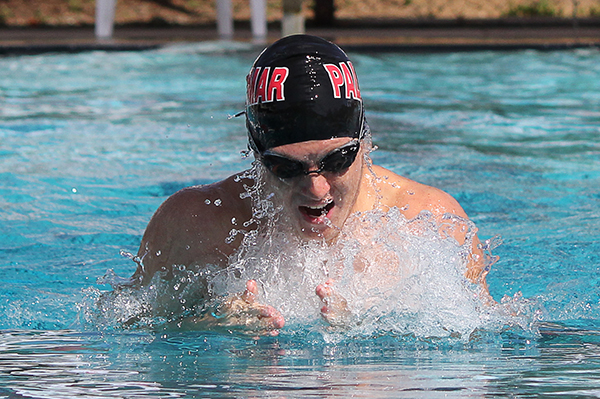 Swimmer finds his stroke in the pool

Nineteen-year-old sophomore Zach Wagonis is a stand out swimmer at Palomar College, boasting a time of 1:08 in the 100-meter breaststroke.

Wagonis started out in athletics by trying every sport. His older brother played water polo, which led to him attending local club practices at the pool. Wagonis decided that he liked being in the water, and wanted to be better than his brother.

“Most water polo players don’t like swim,” Wagonis said. “But for me, during a meet I really enjoy the energy and the competitiveness of it. When you’re on the block, it’s just on you.”

Wagonis is also an animal lover and has a black lab-mix puppy, Lexi, which his family adopted when he was in the third grade. On Saturdays, Wagonis volunteers at Animal Friends of the Valley in Lake Elsinore where he helps angry dogs that bite and don’t work well with others in hopes that they can get adopted.

Wagonis is a hard worker and puts effort into everything he does, including cracking jokes.

“He’s funny and what makes him stand out is obviously he is the best breaststroker and he makes jokes that drive us,” teammate Abe Turner said.

Wagonis is a self proclaimed adrenaline junkie and in his free time is learning how to solo skydive and base jump. He is a lover of handstands, roller coasters and scary movies.

Coach Jem McAdams and his teammates spend most of their days at the pool deck, listening to loud upbeat music while training.

“What he did last year to this year in terms of his breaststroke has been almost night and day,” McAdams said. “They are there everyday grinding and training with each other in the pool, so they pull for each other to swim their best. In terms of being a teammate like that, [Wagonis] is excellent.”

Wagonis sees himself taking a break from swimming after Palomar, at least competitively. While his time racing may be coming to a close, he looks forward to attending a university near the beach so he can continue his role as a California state lifeguard.