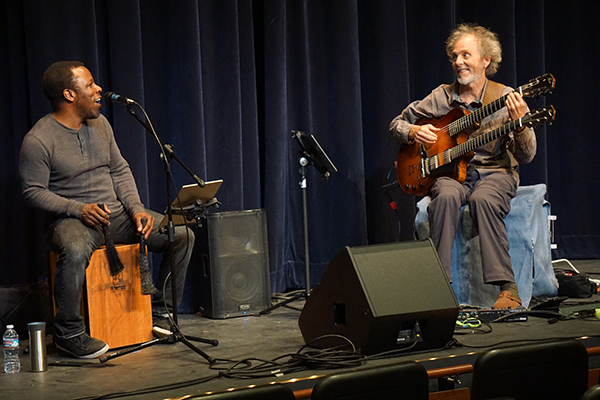 Music duo is walking on a dream at Concert Hour

Peter Sprague and Leonard Patton, a musical duo, released an album titled “Dream Walkin” (2015) that was nominated for the Best Jazz Recording at the 2015 SD Music Awards.

The duo was featured in Palomar’s Concert Hour on April 13 at the Howard Brubeck Theatre. Sprague and Patton performed re-interpretations of songs from Stevie Wonder, The Beatles and Djavan. Their style combines a variety of different musical genres.

Patton’s voice enchanted the audience while singing the Djavan song “Alagoas,” a Samba styled song that Patton sang in Portuguese. Sprague brought an eccentric aspect to the performance by playing the double-neck guitar.

“The Concert Hour is an ongoing event celebrated here at Palomar and they call us once a year to do it,” Sprague said. “This venue is great with a good size, good turnout, the acoustics are great.”

Additionally, they played a re-interpretation of “Lucy in the Sky with Diamonds” from the Beatles album “Sgt. Pepper’s Lonely Hearts Band Club” (1967). The duo only uses two instruments: the double-neck guitar and a Cajón, a Peruvian box-shaped percussion instrument.

Cindy Creswell, a flute player who was in attendance, commented, “[It was] over-the-top talented. An extremely interesting way of using only two instruments. It was magical overall.”

Patton acknowledged his new project that involves the Guinness Book of World Records after the performance. Patton is looking to break the record of number of performances played within a 24-hour period. The current record is currently held by the Norwegian Helge Toft, who played in 65 venues around the city of Haugesund, Norway, however Patton is looking to accomplish this goal with 70 gigs.

“The reason to do achieve this record is for an organization, ‘Jazz Vocal Workshop,’ to help raise funds for scholarship shifted towards kids who don’t have a chance to attend the program,” Patton said. “This whole 24-hour concert is a bigger picture, a big deal, it’s a promotional aspect to let everyone know about the importance of music and for these kids.”