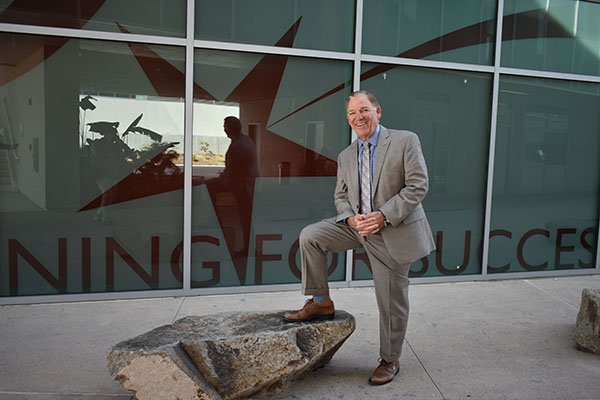 The man who raised $25 million for Palomar during his 10-year career started his own education without enough money for food.

“As a college student, I went to social services to get food stamps,” said Richard Talmo, the Executive Director of the Palomar Foundation .

It would take Talmo five subsequent visits before he got the help he needed and for him to realize that people who didn’t have the college education would give up trying to get help due to embarrassment or the complex paperwork involved.

“It became more and more evident that I wanted to do something more than being a business person,” Talmo said. “I wanted to make a difference in the world.”

Talmo is set to retire this month, but the roots of inspiration behind his legacy at Palomar can be traced back to the time when Talmo was growing up in South Central Los Angeles during the 1965 Watts riots.

“I realized as a child that there are people that have a lot and people who don’t have a lot,” Talmo said. “I just thought that the greater good in this world is helping people.”

Talmo described his neighborhood’s cultural imbalance during his youth that influenced his decision of wanting to be involved in social work in college.

The Ramona Youth Center, a former program that helped kids who were on the streets, is where Talmo recalls his first time getting his feet wet in fundraising. He contributed by raising money, awareness and community support at the time.

“All of a sudden, I became a fundraiser,” Talmo said. “I never thought that that would be my calling.”

After a few years working as a fundraiser and building foundations, Talmo left fundraising for six years in search of a new career; becoming an executive recruiter in Silicon Valley during that time and later applied, then appointed as the Executive Director of the Palomar Foundation in May 2007.

Kim Hartwell, who has been at the Foundation for 12 years and is the current development officer, mentions that Talmo has been the driving force behind the success of the Foundation.

“He’s the one that changed this operation into a more professional fundraising operation,” Hartwell said. “He came in and brought insight from his other assignments and took us to a whole other level,”

Since the moment Talmo took over, the Foundation has been approaching student involvement by having them interact with key donors, making presentations and by having them write letters to their donors after being awarded a scholarship.

An example of such an event where donors get a chance to meet with students they donate to is Scholars Night.

“It becomes a wonderful interaction with the students, and that interaction is what motivates the donors,” Talmo said.

The Foundations other key fundraising events include it’s annual fall gala and the President’s Annual Invitational Golf Classic – this year on May 22. Both events contribute hundred thousands of dollars, which go toward scholarships and grants.

Assistant Director for the Foundation, Debbie King is currently in her fourth year working at the Foundation and is one of Talmo’s personal friends and colleague.

“Rich is a great team builder, a great communicator, and a courageous leader,” King said. She added that he is comfortable with who he is, and that confidence is what helps him in his work.

“He loves to be outfront representing the power of philanthropy and how that can really change lives,” King said.

In a 2007 San Diego Union Tribune article, Talmo said that he would like to retire at Palomar College and build the Palomar Foundation to the full level of its potential.

“Professionally, I’ve taken it as far as I can with the tools and the resources that I have,” Talmo said. “As I reflect on that article, I think I have accomplished everything that I could in this role and I’m very proud of what I’ve done.”

Talmo is scheduled to leave his position on April 28. He will continue his fundraising career by assisting Ascend Partners Group in opening a pre-school for special needs children in the Grand Cayman Islands.

“Thirty-five years ago when I was young in this profession my mother said to me, ‘This fundraising stuff is good until you get a real job,'” Talmo said. “I think she would be very proud of me right now if she knew what I accomplished in my career.”