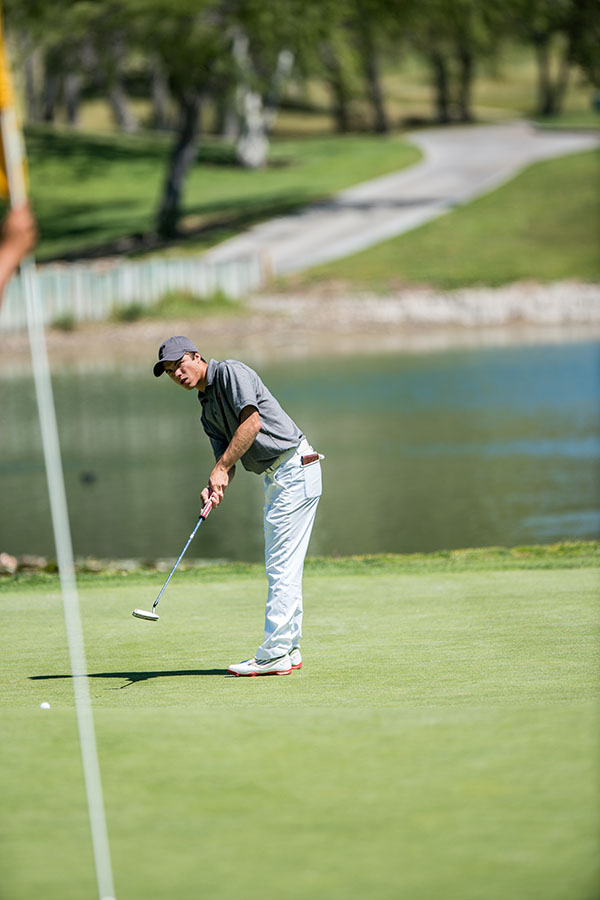 Palomar men’s golf head coach Mark Halda does not put emphasis on numbers, instead choosing to focus on the journey it takes to get from the tee to the green.

Halda has been the head coach for the men’s golf team for eight years. According to him, his coaching technique is to “mentally stay in the moment” when it comes to playing during practice or in a match.

“For some reason, you put so much emphasis on the number you want to shoot, you forget about the process it’s going to take to get there; I think that is where we are at as a team,” Halda said.

“At the end of the day, it’s a game, you are playing a game … relax and play,” Halda said.

Max Wittmack, 20, has been playing for Halda for three years (one of which he was red-shirted), and has learned that the mental aspect of golf is what you must first master to be a success on the links.

“If you let yourself think you are going to have a problem, then you are doomed from the start,” Wittmack said. “Golf is mental. Whatever course I’m playing, whatever shot I’m playing or whatever club I’m hitting is my favorite. That’s what coach has taught us.”

Although golf is an individual sport, Halda sees it as a team sport, and the better you play, the more it helps the team.

“We don’t have names on our bags; we don’t believe in that. We have ‘P’, we have Palomar College, that’s who we are,” Halda said.

Halda wants the team to focus on competing and not on the numbers, which he hopes to get down to a team average of 375; a 75 for each player.

“It’s a matter of time before we break our plateau,” Halda said. “I’m waiting for that one match where it clicks.”

The team recently took a step in the right direction during a match on March 23, where they shot a combined score of 379 to win a five-way Pacific Coast Athletic Conference tournament at the Gary Player Signature Course at Westin Mission Hills Golf Course. Brad Cain, described as the “putter” of the team, and Jaime Sanz both shot a 75 to lead the Comets.

As the season winds on, Halda looks to continue instilling a positive mentality in his team, helping to minimize mistakes, have fun, and make sure each of his players walks off the course knowing win or lose they gave it everything they had.