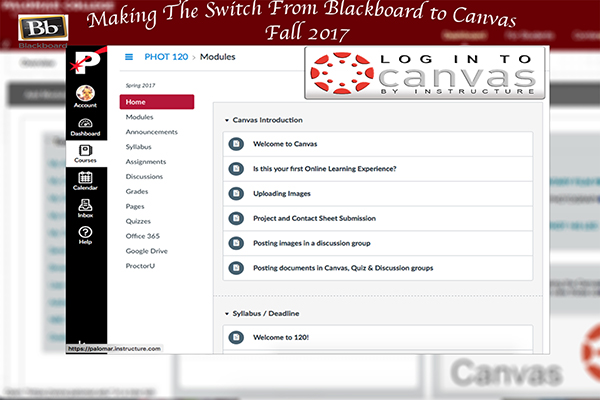 Canvas to replace Blackboard at Palomar

Palomar is changing the learning software students use for classes with an online component.

Blackboard, the former software, will become obsolete as students will now be using a sleeker learning management system in Canvas. The process is going take place over one year with the goal of all courses being on Canvas by spring of 2018.

The pilot of Canvas started in spring 2016 with 400 initial student users. Fall of 2016 opened both Canvas and Blackboard for use leaving one year to transition. Now, this semester there are 5,965 students using Canvas.

Palomar has been using Blackboard since 1998. For 18 years Palomar students and faculty have been using the same interface with minimal changes and updates.

Director of Academic Technology, Dr. Najib Manea attended the Blackboard conference BbWorld in 2015. Knowing Blackboard is lagging behind technically, he learned that they were in the process of changing to a new product called Ultra.

“They said that Ultra would be up and running soon after the conference but still today, there has been no sign of it being released,” Manea said. “If we are not in sync with other community colleges we’ll be left behind.”

Manea said that over time they were able to significantly reduce the annual cost of Blackboard. “Blackboard was $160,000 when I first started. We negotiated that and now it is around $60,000, but we just signed a contract with Canvas until summer 2019 at zero dollars,” Manea said.

Canvas is paid for by the Online Education Initiative. It acts as a grant funded through the California Community Colleges Chancellor’s Office, and also provide services like online tutoring and counseling.

Palomar Academic Technology Coordinator, Lillian Payn said, “The majority if not all colleges in the state have adopted [Canvas] because of the online education initiative and the agreement with the chancellor’s office.”

The contract with Blackboard ends June of 2018 leaving one year for the Canvas pilot and one for the transition.

Canvas has had good feedback and success from students.

“I first used Canvas last semester and it’s modern and unique compared to Blackboard,” 20-year-old business major Casey Hollis said. “It seemed like my teacher for Canvas was better organized than my Blackboard ones which made the class easier to stay on top of my work”

Manea, Payn and David Gray are offering workshops and bootcamps that help teachers learn to teach online through Canvas and make the transition smooth from Blackboard.