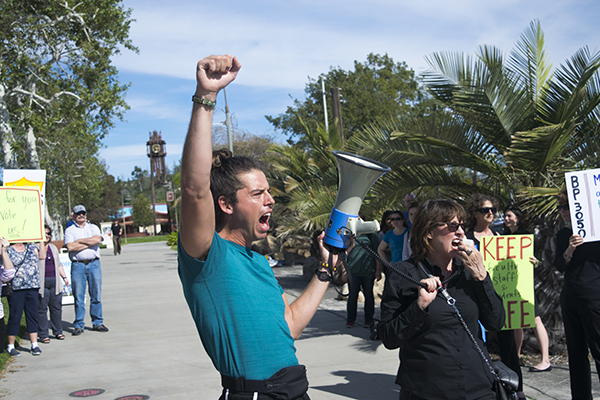 A group of nearly 100 faculty and students chanted “Not my Palomar!” and “Not rehired!” in the main parking lot March 14 to protest a dean before petitioning the Governing Board to terminate his contract.

Dean Syed “Khaled” Hussain has been accused of harassment, verbal abuse, threatening departments and creating a hostile work environment. Six faculty members have said they had to seek medical help due to stress in the workplace. These charges were brought before the Governing Board at its monthly meeting. The five-members went into closed session and announced publicly that they terminated one employee and put the other on paid administrative leave. They did not announce who these employees were as dictated by law.

Shannon Leinhart, faculty union president, stated in an email after the board’s verdict that she didn’t know what the board decided.

“We are very disappointed,” Leinhart said.

A flier advertising the event was given out at a faculty senate meeting on March 6 and posted around campus. The headline on the flyer read, “Why is a toxic dean being protected? For the past seven months, the Faculty and Staff have been dealing with a toxic probationary Dean.”

Susan Snow, associate professor of mathematics, spoke during public comment to the Governing Board trustees after the rally.

“In the past seven months, many employees in [Arts, Media, Business, and Computer Science] have been living their worst nightmare. Newly hired Mr. Hussain began alienating individuals, and then entire departments within weeks of walking on campus.”

Ending to a long applause, Snow concluded, “You need to vote to terminate the contract of Mr. Hussain so that individuals in programs can rip off the targets on their backs and resume routine responsibilities without fear of intimidation, humiliation or retaliation.”

Among the students attending the protest was Nicole Beltran, a 28-year-old legal studies major who held a sign saying “Stop the intimidation.” Beltran said that she wanted to show support for faculty.

“I’ve heard professors talking about their students in concerned ways before as if they were their own children,” she said. “I hear that same tone in the voices of the faculty and staff members. If they’re getting abused, if I could help it, I will help at least a little bit so that’s why I’m here.”

Michael Mufson, theater arts professor, spoke at the rally. “We, as the faculty, have been totally dismissed by this administration in this situation and It’s not acceptable,” Mufson said. “What’s at stake if this dean continues in his position is the very livelihood and thriving of the performing arts, media programs and particularly the arts program.”

Ellen Weller, who has been in the performing arts department since 2005, said she is one of the newest hires out of the faculty present at the event. She said that during her time here that she has never seen anything like this.

“Punishing tenured faculty members for disagreeing with you is not leadership,” Weller said.

Bill Jahnel, professor of history, said he was there to support his colleagues who have come forward against Hussain over actions of harassment and bullying.

“Any one of these would get a faculty member dismissed, a locus of all of them would be a scandal. Could you imagine a faculty member bullying students verbally and being allowed to continue? Or a faculty member berating and engaging in internecine warfare in their department and allowing that to move forward?”

Jahnel said that staff and faculty should be valued, and that Hussain is not doing that and asked for the board to terminate his contract.

After trying to reach Hussain for comment, he responded in an email, “Thank you for bringing this to my attention and reaching out to me. Unfortunately, I am unable to respond at this time. I wish you the very best with your future endeavors. Take care.”

In an official statement, Director of Public Affairs Laura Gropen said in an email, “The District does not publicly comment on confidential personnel matters.”

She stated that the district takes complaints like this seriously, and follows protocol in investigating the complaints to reach an appropriate conclusion that is consistent with applicable laws.