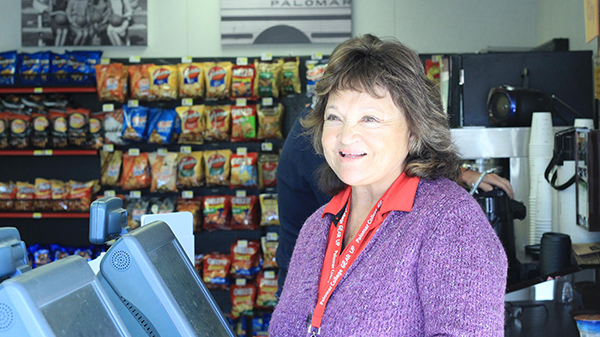 Every day thousands of students walk from one side of campus to the other to get to class, and somewhere in the middle, students might stop by the Snack Shack.

If a student has ever popped into the Snack Shack, they likely have come across “the Snack Shack Lady,” a cheery woman that fronts the shop and is fairly known for her friendliness among campus.

Located across from the massive construction site of the new library, sits the tiny Snack Shack. Upon entering the Snack Shack, students will be greeted by a smiling face and a warm personality.

Martha Lomelino, aka “The Snack Shack Lady,” has been working as the cashier at the Snack Shack almost 13 years and said she’s enjoyed her many years of service there and has developed a soft spot for the students who visit.

“I really enjoy listening to all of the students and their uplifting stories,” she said.

She tries to spread the cheer to students. “When they have bad days, just letting them know that it’s going to be okay,” is something she enjoys doing.

Any student who goes to the Snack Shack will be asked to leave their backpacks outside. When asked about this policy Lomelino said that she doesn’t necessarily worry about the students stealing, she just prefers that they “take a load off of their back.”

While being interviewed, Lomelino was very often asking her customers how their day was going, while also cheerfully acknowledging the sunny day after two days of rain.

It was these small details that seemed to put a smile on her costumers’ faces.”

Lomelino currently has no plans for retirement, she stated simply that she wants to work at the Snack Shack indefinitely.

She described herself as someone who loves people. Whether it’s the students rushing in before or after classes, teachers and faculty, or the construction workers coming in during their breaks, Lomelino always ensures that the Snack Shack is a welcoming environment to all.