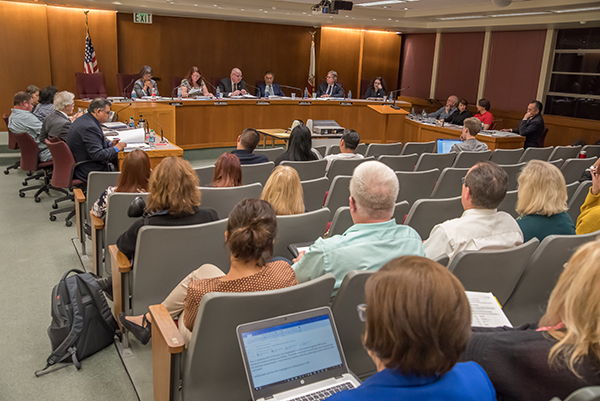 Not so long ago 27-year-old Palomar student, Isamel Blas was not a student because of his fear to register as an undocumented citizen.

A citizen who became documented at 21, Blas was afraid to come to school because he thought non-citizens couldn’t attend college. His personal experience as an undocumented person led him to speak in front of the governing board on Feb. 16.

“I feel the anxiety I had during that time is an anxiety that is felt at this moment all around school,” he said. “There’s fear, there’s uncertainty in our political climate.”

He pulled out his phone to find a message sent to him by a friend who is in the U.S. on a student visa and wanted to visit his home country.

“I really want to visit my family but I’m extremely afraid of this whole new system,” Blas read from his phone.

In response to the concerns of Blas, his friend and others, the college faculty and administration voted to make Palomar a Safe Haven and create a committee to deal with the issue to calm the fears of these students who are uncertain of the future in the face of the Trump administration.

The governing board affirmed a resolution declaring Palomar a “safe haven,” reaffirming that it “stands united in its unequivocal support of an immigrant-friendly environment for all students who choose to better their lives through education.”

This resolution was passed in response to the Trump administration and the stance of the schools district congressman, Duncan Hunter. “The submission of a federal funding request for sanctuaries is irresponsible and rewards disregard for the law— and I can’t support that,” Hunter said in a public statement.

During the meeting, board Trustee John Halcon voiced his concern. “I’ve been advised not only by our own board, but by boards across the state of California that there’s no sense in putting a target on our back when it’s not so much the statement so much as the action behind it,” Halcon said.

For this reason, the board decided to use the term “safe haven” instead of “sanctuary school” to affirm their support of undocumented students while avoiding consequences from the federal government.

The resolution reflects the concerns of many in the California college community, including California Community College Chancellor Eloy Oakley.

In a press release, Oakley affirmed the college system’s support of all students and the values of diversity and inclusion.

A committee on campus called the AB 540 committee, as well as other associated faculty, have launched efforts to qualm the fears of Palomar’s undocumented student population.

Nancy Moreno is a tri-chair member of the committee said, “One of the challenges in working with [undocumented students] is visibility. There’s a fear of disclosing, like, ‘what is going to happen if I disclose my status or the status of my family members?'”

Jack Kahn, dean of social and behavioral sciences, said that’s why they had to be creative in getting the word out to students through the classroom and events.

These concerns have resulted faculty visits the classrooms of different departments to tell students about the ways the district and faculty are supporting them.

According to Moreno, the hope is to have the project start this week.

CONCERNS OF THE UNDOCUMENTED

Norma Villa is a 25 year old student who graduated from Palomar with honors and is finishing up her teaching degree at California State University, San Marcos with the hopes of coming back to Palomar to teach Spanish. She pays her bills by working at Palomar as a public relations mentor, helping students learn about the student services available to them.

She is also an undocumented immigrant.

Villa moved here with her family from Mexico City when she was 11. She made her way through high school, and attended Palomar in 2012, taking whatever classes she could afford. When the Deferred Action for Childhood Arrivals (DACA) was introduced in 2013 she was able to afford being a full-time student.

Since the election, however, Villa and her family have felt the fear of uncertainty and have been accustomed to the current system. “If I were to go back to where I came from, I would be a stranger.”

Villa welled up in tears as she explained her story. “It’s really hard to talk about it because it’s not a simple topic to talk about. For me, I feel sometimes that I can’t even breathe. That I’m in this bubble, and they’re looking at us from the top, and I’m pretty much just waiting for [President Trump] to pick me up and take me out.”

Even with the fear that she has, Villa still has hope for the Trump administration. “Hopefully, he sees that a lot of us are doing a great job and I feel like we should get rewarded for that.”

She also felt that the efforts of Palomar to show support for students will be beneficial and came as a surprise. “Were not alone, we have people backing us up.”

NO REASON FOR ALARM

Although many are concerned, Palomar Police Department Sgt. Mike Maines said there is no cause for any student to be alarmed.

“There’s a lot of hysteria going around that isn’t founded in any truth,” Maines said.

He went on to explain that ICE doesn’t look for specific individuals, but do broad sweeps, often by sending letters asking undocumented immigrants to self report.

“ICE is not gonna come here with a warrant for one person. They’re not going to come here going, ‘We’re going to check everybody’s papers.’ That’s not gonna happen,” Maines said.

Maines said that there are no policy changes as a result of the Boards resolution. “It’s business as usual for us. What the college is saying is that we’re respecting the rights of all people and that’s what police departments do.”

To find out more about any of this information, there is a new webpage called AB 540 and immigrant resources, which can be found under the current students tab of the college website.

The webpage includes resources for students, faculty, events, and other information.

Along with a copy of the resolution, the webpage includes a statement from President Joi Lin Blake issued a week after the election of president Trump. It states that “Palomar College is steadfast in its unwavering resolve and commitment to open access and supporting you as you strive to realize your dreams.”