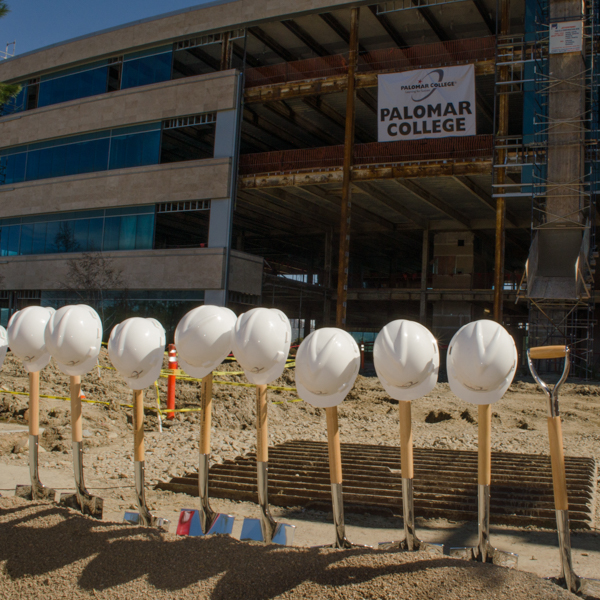 Palomar College broke ground on a new satellite campus in Rancho Bernardo increasing the amount of classes offered to students for the summer of 2018.

Palomar College held a groundbreaking ceremony in honor of its upcoming South Education Center on March 3 in Rancho Bernardo.

In a succession of speeches at the event, President Joi Lin Blake, Governing Board Secretary John Halcón and Interim Vice President of Instruction Daniel Sourbeer emphasized the importance of expanding access to higher education for students living in the southern region of the Palomar Community College District.

Despite earlier setbacks and an initial opening set for fall 2017, construction of the South Education Center is underway and will now open summer 2018.

Last year, the city of San Diego sued Palomar over insufficiencies found within the environmental impact report issued by the college. The lawsuit alleged that Palomar had not offered adequate solutions to address the traffic that the center would generate.

The center is located near a popular intersection on Rancho Bernardo Road. Traffic is congested throughout the area due to it being a hub of condos and restaurants. Local residents feared that students would park in their neighborhoods and contribute to the overcrowding.

“We have a house on the hill,” Roger Hebert said. “We don’t want them parking there.”

The lawsuit was settled, but it forced several provisions onto the college.

Signs must be erected near the campus to direct students toward on-site parking.

Palomar will offer free parking to students for the first two semesters, at the very least, following the center’s opening. The campus features a surface parking lot and a parking garage adjacent to the primary building.

Vice President of Finance Ron Perez said, “We, as a district, want to be good neighbors.”

Following the settlement, construction moved forward. Proposition M, a multimillion dollar bond, funded the purchase of the site for a previously reported sum of $33 million.

Due to the enormity of the region covered by the Palomar Community College District, students living in the southernmost areas such as Poway have been forced to travel long distances to San Marcos or Escondido.

The course offerings will be similar to those available on the main campus, but they will be more focused on science and technology.

A complete range of student services will be available at the South Education Center, including counseling and financial aid. It offers similar facilities to the Escondido Education Center.

The campus is expected to support approximately 2,000 full-time students. More faculty members will be hired in order to fulfill the growing demands.

According to President Blake, the South Center Education center will offer “the same Palomar quality, the same academic rigor, the same integrity of the curriculum and learning experience.”