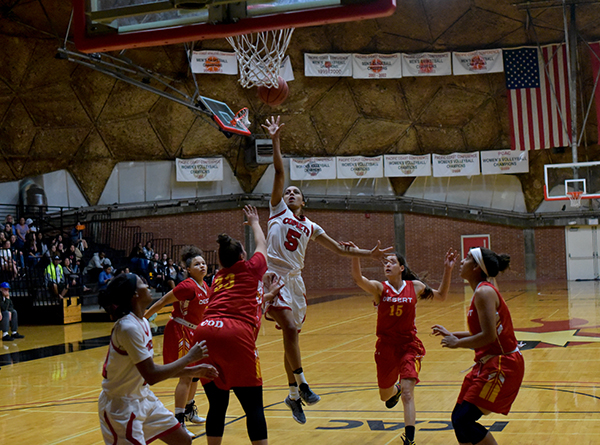 The No. 3 ranked Comets won their 16th straight game on Sophomore Night at Palomar College with a dismantling 95-26 win against the College of the Desert Roadrunners on Wednesday Feb.15.

Palomar got off to a quick start in the first half, spreading the floor on offense with transition 3-point field goals and pressing full-court defense. The Comets led the Roadrunners 49-11 at halftime.

The second half wasn’t mush better for the Roadrunners, as the Comets outscored them 47-16 with five players scoring in double figures, and six players with two or more steals for the game.

“The team has been successful because of the intensity we bring to every game,” said sophomore guard Roshell Lamug.

The Comets stifling defense and ball movement on offense was just too much for the Roadrunners to overcome.

The Roadrunners were held to season low 27 points, and the Comets racked up 20 steals; four by sophomore guard Regina Sheffield.

Palomar’s women basketball head coach, Leigh Marshall, said this season’s team is “smaller” than past seasons, so they use their “speed” and “scrappy” attitude to get after teams on defense.

Freshman guard Monica Todd, who led the team with 26 points off the bench, said, “We compete more in practice than we do in games, so it makes games easier for us.”

The women basketball team’s following game was a 94-46 road win against MiraCosta College, to finish the season with 25-2, and their fourth conference championship in five seasons.

The Comets finish the season red hot, winning their last three games by a combined score of 275-76, with each win being by at least 60 points.

The team heads into to the playoffs looking to improve on last season’s Sweet Sixteen playoff run where they lost to Mt. San Antonio Community College, and a possible rematch against No.1 ranked East Los Angles who they lost to by only two points earlier in the season.

“Every year when we recruit kids or we talk as a group, our goal is to win state,” Marshall said.

Co-captain Ariana Hernandez, who is part of Palomar’s “Sophomore Six” said she would love to give Marshall her first state championship for all she has meant to the women’s basketball program.

“She built this program up from nothing. . . We have to pay her back for all the hard work she has done for us,” Hernandez said.

The playoffs start Friday Feb. 24, when the Comets will face off against Orange Coast for the fourth time this season.