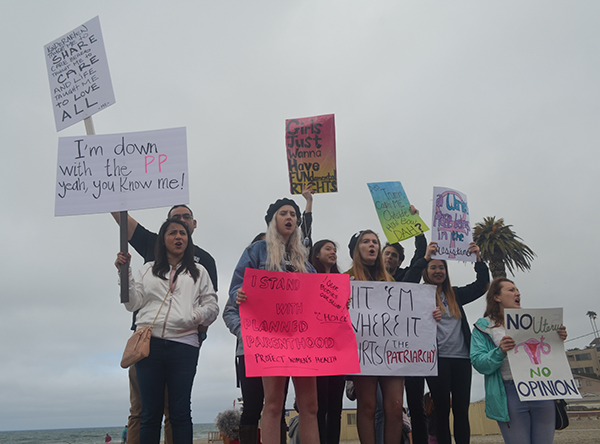 Cease and desist the war against women

These words, spoken by our newly sworn in President Donald Trump, live in infamy and precede a dark future within our midst. Though President Trump has assured these words are simply, “locker room talk,” it appears they may be taking a new form of lawful action. Defunding Planned Parenthood is a top priority for the new president and Trump has made it clear that he’s a man who stands by his word.

The Women’s March that occurred nationwide on Jan. 21, is an ode to the impact Planned Parenthood has had in the U.S., as it played a major crux in the purpose of those protesting.

Thanks to Planned Parenthood, patients under the Affordable Care Act are able to receive affordable reproductive healthcare services. These services include access to birth control, UTI and STI testing, and even mammogram screenings for breast cancer. Many of these services are even offered online and delivered in discreet packaging.

Yes, this center provides abortions, a safe practice to end a pregnancy for a woman who is not emotionally, physically, or financially ready to carry a child. But this center also does so much more in protecting and caring for the lives of those living in our country. Planned Parenthood is not the baby killer of America, it is a safe haven for reproductive and sexual care in our country.

This safe haven, however, is likely to soon be destroyed. Not only is Planned Parenthood threatened to be defunded, but the rulings of the case Roe v. Wade are soon to be challenged as well. This could mean a complete take away of legal access to a safe and legal abortion for all women of the U.S.

Trumps Supreme Court nominee, Neil Gorsuch, has been known to interfere with women’s reproductive and sexual healthcare rights in the past. He even has a history of interfering with women’s access to birth control.

Gorsuch has already taken legal action against Planned Parenthood, backing Utah’s decision to defund it in October 2016. He made this decision on a source of heavily edited videos portraying the provider as exchanging in the commission of fetal tissue. Gorsuch blatantly bent the rules by backing this case. His decision was made upon the foundation of highly doctored evidence.

With Gorsuch residing on the Supreme Court, we will experience a loss of safety that has been provided by Planned Parenthood. Planned Parenthood is the safety net of healthcare coverage and Gorsuch is a bully, unafraid to break the rules, and unafraid to kick down those with less power. By Trump nominating him, the uninsured could be left with no net to fall into.

Contrary to conservative belief, a world without Planned Parenthood is much, much scarier than a world with it.