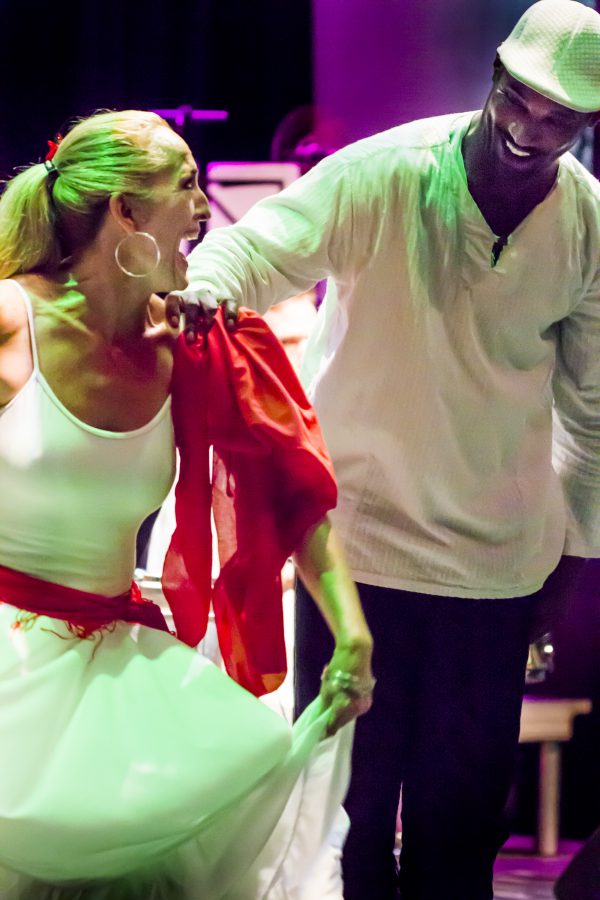 Dancing around the world in one night

The World Dance Festival was a night full of dancing, socialization new friends, and cultural exposure.

Upon entering the studio theater there was a stage set up for the guest band, reserved tables set up along the sides, and chairs set up for the rest of the guests. People quickly flooded in, ready to begin a night full of dancing.

First up, was a passionate speech from the Chair of Performing Arts, Patriceann Mead, who expressed her hope that people would get a little taste of what the Palomar program was all about.

Next, the guests were encouraged to come down to the open floor, where Mead and Silfredo La O Vigo taught an introductory salsa lesson. When the lesson concluded, they brought out the live salsa band, Kimba Light. Everyone found a partner and begun dancing the night away.

After a while, they took a short break in order get the stage set up for the World Dance Expo. The Expo featured a Conga, a Rumba, a Middle Eastern style known as Ojos A Si, a Capoeira de Palomar, and concluded with Otea Titi, a Tahitian style.

The guests were then invited back to the dance floor to salsa along to Kimba Light for the rest of the evening. Kimba Light played a majority of Spanish songs, but sang a few songs in English, one of which included “UpTown Funk” by Singer Bruno Mars.

The guests were laughing and smiling, partnering up with strangers, and dancing their hearts out. Mead had an expression of joy and accomplishment across her face all night. As well as Kimba Light members, who were having a blast, embracing the energy, and filmed the night live on Facebook.

Although it was an amazing event, it did come with its down sides. The event was scheduled to start at 7 p.m. the opening speech did not begin until 7:30 p.m. The event did seem a bit scattered almost as if some of it had been thrown together last minute.

A couple times when songs would end the guests did not clap, almost as if they expected the next song to start right away, but when it didn’t Mead had to coax people to start clapping.

The biggest downside, was that they said that there was no filming or photography aloud. This was a downside because people were really enjoying the music and the cultural dance performances, and they would have loved to share their experiences with friends and family.

Overall it was a very fun and interactive night. The guests got a great feel for the many styles of dance, and the variety of dance classes that Palomar offers.