Palomar Student Brandon McCurdy and the Comets wrestling team are entering the playoffs on a high note.

McCurdy, 18, joined the wrestling team because he was getting bullied his freshman year at Otay Ranch High School. He later became captain of his team.

“People would shove, push me, and call me names because I was little, like five feet little, so when I started wrestling and got really good they started to leave me alone.”

“Taking people down is really fun,” McCurdy said. “My favorite move is hi-c because I’m quick enough to execute it and it often allows me to get the opponent on their back from a hi-c to a double leg.”

McCurdy’s before match rituals are listening to Eminem’s song “Lose Yourself” and going through the motions of what moves he will do to his opponent while practicing his drills on his own.

“My favorite wrestler is Aaron Pico, he never stops wrestling and his work ethic is the height of the highest bar,” McCurdy said.

McCurdy’s diet consists of Spinach, Eggs, Fruit and Chicken. He tends to stay away from soda and bread but will eat pasta a couple days before his match for energy to perform well.

“Mentally, it is hard to cut weight all the time and school. So, academics and wrestling is hard, but you have to persevere and motivate yourself to dig deep inside because it’s a really hard sport.” 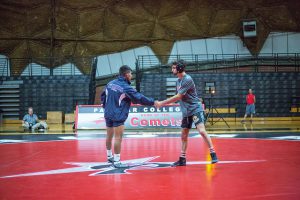 Outside of practice he works on his cardio by running and swimming and is going to be coaching younger kids at Eastlake after this upcoming season. McCurdy said everything he does outside is to work toward winning a state championship.

“My best friend, Jake Schaeffer, is currently on the wrestling team and he was my best friend throughout high school and we used to wrestle together, he is my biggest motivator and role model on and off the mat.”

Political science major Jake Schaeffer, 20, said “I’m really proud of [Brandon], he’s like a little brother to me and I’m really glad to see him making strides in the classroom and on the mat, he’s a great athlete.”

After his time at Palomar, McCurdy would like to attend a 4-year college and continue wrestling.