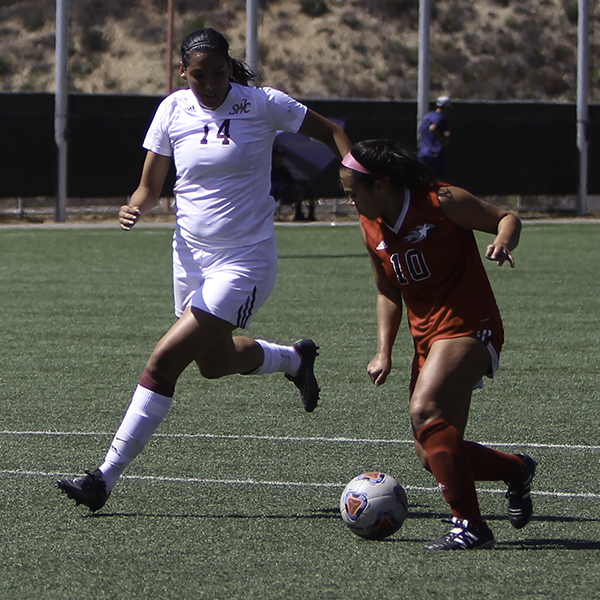 The Palomar’s women’s soccer team is fighting through their fair share of struggles this year, but the resilient club isn’t willing to give up just yet.

The Comets are 3-11 this year and even though their struggles have been consistent, they continue to make improvements.

It’s been quite the struggle for Palomar’s women’s soccer team in 2016. They currently have a record of 2-7 in games within their conference and a 3-11 overall record. The chances of a late-season comeback are doubtful. However, their hopes for 2017 remain high as they displayed flashes of brilliance from time-to-time.

“We’ve been really good at picking up in the intensity in the second half,” said freshman center-defender Kiara Flores. “We’re playing with more aggressiveness and heart as the season goes on. What’s hurt us is injuries. With all these different players coming in and out, it’s hard to build chemistry.”

Palomar’s most recent game was against Mesa college and the Comets took the loss by a final score of 5-0. Luck has certainly not been with the Comets this year, but fellow Freshman Lindsay Pelchat sees no reason to let up as the season starts to come to a close.

“We continue to show improvement each game,” said Pelchat. “Our goal is to finish strong and continue to work as hard as we can to get better.”

Obviously, these are not the results the Comets had in mind this year. Pelchat and Flores also commented on the fact that a good amount of players are on their way out of Palomar and thus everybody’s commitment level isn’t the same. This has made it difficult for the team to get on the same page and find a true connection. This won’t stop the majority from giving it their all and showing respect to the sport they love with relentless preparation and execution. While some may play for fun or to stay in shape, others have serious interest in furthering their career as a soccer player

Instead of focusing on the negatives, the Comets prefer to worry about the positives and what adjustments they can make going forward. If nothing else, this women’s team will attempt to lay the foundation for future Comets teams to have more success. The last thing this team wants to do is let new players come in think that losing is part of the culture. The older, veteran players will undoubtedly attempt to show the younger, returning women how to overcome adversity and make the plays that will, ultimately give their team the win.