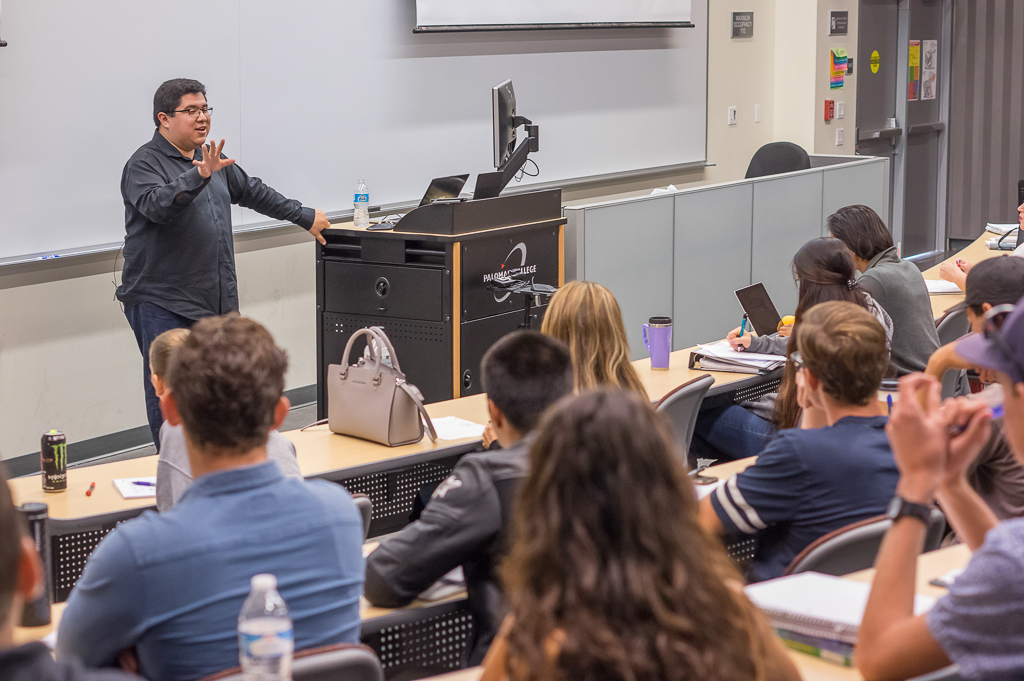 Amidst the Presidential campaigns, Palomar College hosted another edition of Political Economy Days.

This year, Palomar professors gathered alongside regional professors and intellectuals to spur discussion on current events. The two-day lecture series was held from Oct. 26-27 and was largely held in auditorium seating halls across Palomar’s main campus. Speeches covered a wide range such as immigration reform, women’s rights and a one-man show performed by Ian Ruskin.

Students on campus are encouraged to visit the event held both in the fall and spring semester where oftentimes an incentive is offered in the form of an assignment for credit by campus professors.

Mikinna Lammont, a 20-year-old business major, attended several presentations said, “I had to come to Political Economy Days as an econ class requirement, so I just looked at which ones I found relevant and fit my schedule.”

University of California San Diego political science professor Tom Wong presented a speech on immigration reform from the beginning of U.S. history to the present. He has worked for the White House, among other top agencies, and is currently compiling data on how each representative of the government will vote toward immigration reform.

Using statistical means, Wong is able to provide a likely outcome or prediction with little to no error. He further defined to audience members what political science majors do and why they are important to government officials, or “hopefuls,” especially during elections.

UCSD political science professor David Mares gave a presentation called, “Harm Reduction Drug Policies.” He touched on key points such as: drugs influence mood and behavior, how they are powerful and that they are used to make you feel a desired way.

Mares discussed drugs in a manner most professionals do not. Instead of saying marijuana was a gateway drug and that all drugs lead to crime, he stated that drug use is seen most heavily in college students and declines dramatically, meaning that people are choosing to walk away, and supplemented his speech with facts and data.

“This one speaks out to me because I’m personally in recovery myself from drugs and alcohol,” Steven Croghan, a 23-year old microbiology major, said. “It has affected my family, I’ve lost a lot of family members personally and when I saw this one come up I thought, Why no. I have experience in this.”

Harm reduction’s idea is to diminish consequences associated with drugs. The policies to control drugs such as age, price and penalty differ from countries and now even inside the states. Mares research in the political economy of drug policy states that drugs, including alcohol, are not going anywhere but there is a way to be successful if and while choosing to use them.