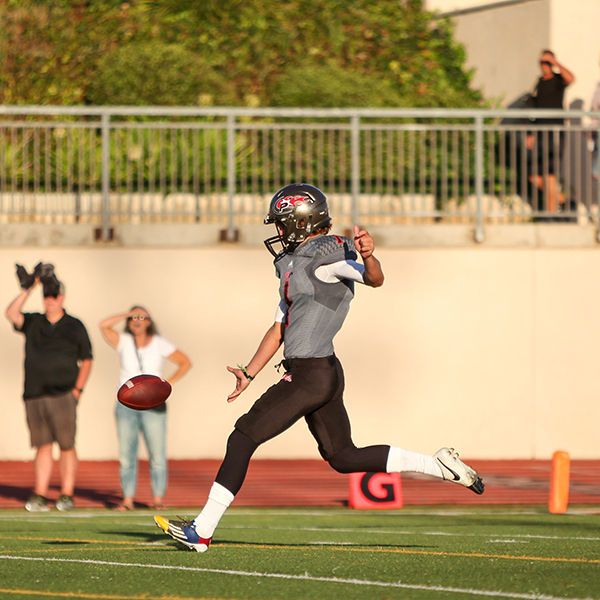 Palomar punter, Sam Tapia, has made major contributions to the 2016 Comets on special teams, giving the opposing offense a long field to go.

Tapia has had an exceptional year thus far with 19 of his punts downing within the opposing team’s 20-yard line in the first five games of 2016.

Recently, Tapia received an award for the Special Teams Player of the Week from the Southern California Football Association’s Southern Conference. Tapia put on a show against the Chaffey Panthers on Oct. 1, punting the ball a total of 355 yards in nine total punts with five of those punts downing within Chaffey’s 20-yard line.

“I was stoked about getting those after-the-week awards with the kicker and safety,” said Tapia. “Which is pretty cool because we were both acknowledged, which is pretty awesome.”

Tapia is a 2014 Cathedral Catholic high school graduate where he started out as a safety, but made the transition to punter when he came to Palomar because he believed he was too small to play as a college level safety. Tapia worked a full year on his fundamentals and has turned himself into a stellar punter.

Tapia has started in all five of the Comet’s games this season while punting the ball for a total of 1,470 yards.

“I always want to work on my flexibility trying to get my hang time to go up, at least to 5 seconds occasionally,” said Tapia. “I’m always working on my aim and where I can place it inside the 10 yard-line.”

Tapia picked Palomar because he’s a local and knows the football program is good.

“It’s where I live and it’s my home, so I stayed home for a couple of years,” said Tapia.

Tapia’s four-year plan includes transferring to any Division One university, preferably a university in the Pac 12 or Mountain West conferences because he wants to stay close to the West Coast.

Tapia has a strong connection with his teammates and likes to have fun and joke around with everyone in the locker room and at game time.

Comet’s head coach, Joe Early, said he is proud of Tapia and is impressed at everything he has accomplished this season.

“I think he’s doing a great job,” said Early. “Last week against Chaffey was a prime example for it. We talk about special teams be all about field position and the way he punted it put Chaffey on long fields and that was really beneficial. It was one of the best games I’ve seen one of our punters have in a long time.”

Coach Early also included that Tapia is doing everything he could possibly ask of him.

“He’s doing the little things behind the scenes that he needs to do to be a good football player,” said Early. “He has been as good as kicker out here in a long time and I’m sure he’s going to have the opportunity to play at the next level and will see what goes on from there.”